On August 31st, 2021, I personally handed the last laptop from the crowdfunded first batch of MNT Reforms to its owner in Berlin. This concluded an almost half year marathon of assembling laptops in our studio. My coworkers Greta and Magda did incredible work putting all the parts together, printing components, sewing sleeves, and packaging everything for shipping.

We had only a very short break before going into the next phase, which is shipping all the devices ordered after June 18, 2020. We call this the "post-crowdfunding" phase. The orders from this phase will be fulfilled by Crowd Supply/Mouser through their US warehouse, so the process is a bit different for us and we have to solve a different set of formalities before we can ship out the first batch. This is now mostly completed and the first batch of ~40 devices is scheduled to leave our premises in the next couple of weeks. In parallel I have been busy finding and onboarding a few additional people who will help us during this final push. A number of keyboard and motherboard PCBs require rework, like fixing single backlight LEDs that broke during reflow, or rare electrical shorts (solder bridges).

A question we often get is "When will my order ship"? In the post-crowdfunding phase, this is a lot harder for us to answer, because we are not doing the fulfillment. Our job now is to stock Crowd Supply/Mouser, and they will send packages with your custom configuration to you whenever possible. At 10-15 units every week, that means about 3 more months of production time for the current batch. Factoring in some time before the first units start shipping (this is determined by the time it takes to finalize all paperwork), time in transit to the Mouser warehouse, time for Mouser to unpack the units, time for Mouser to ship to backers, some buffer time and some time for things to go wrong, it could take up to six months until all pre-orders are shipped and Reform is officially in stock. We very much strive to be faster than this, though.

Next to shipping out batches, we spent time engaging with the growing community of MNT Reform owners, mainly in our forum and in our IRC channel (#mnt-reform on irc.libera.chat). This lead to several improvements already making their way into the upcoming device shipments.

An important issue that we became aware of after many people had received and used their MNT Reform in the wild is that with the initial firmware, the keyboard’s microcontroller and the motherboard’s microcontroller (LPC) both were always on, even if the main processor is off. When you shut down your MNT Reform and let it sit for a few days, these microcontrollers would slowly but surely drain the batteries, even to the point where they could go under their minimum voltage and could in some cases not be revived.

We have completed new firmware for the keyboard and LPC that prevent this problem by automatically entering a "deep sleep" state when the user decides to turn the system off. LPC will enter sleep after a 15 minute period of inactivity, while the keyboard will sleep immediately. To wake it up again, hold the Circle key for 1 second.

The new firmware versions are already preinstalled on all post-crowdfunding devices. Previously shipped devices can be updated using this procedure.

As the trackball’s cup is 3D printed in-house using PLA filament. Slight variations in the process could lead to a different feel and different levels of "roughness" when rolling the ball. We were dissatisfied with the amount of variance among trackball cups and looking for a more reliable solution to make the ball’s movement always smooth.

In true hacker spirit, Norman Feske from Genode labs figured out a solution early on using steel ball bearings mounted into the existing, modified cup. Recently, MNT Reform power user Chartreuse contributed a new, parametric OpenSCAD model of the cup that already features 3 cavities for gluing in 2.5mm diameter chrome bearings. We replicated the solution and were so happy with it that we adopted it in production for the post-crowdfunded devices. We will also shortly offer the upgraded cup in our shop. 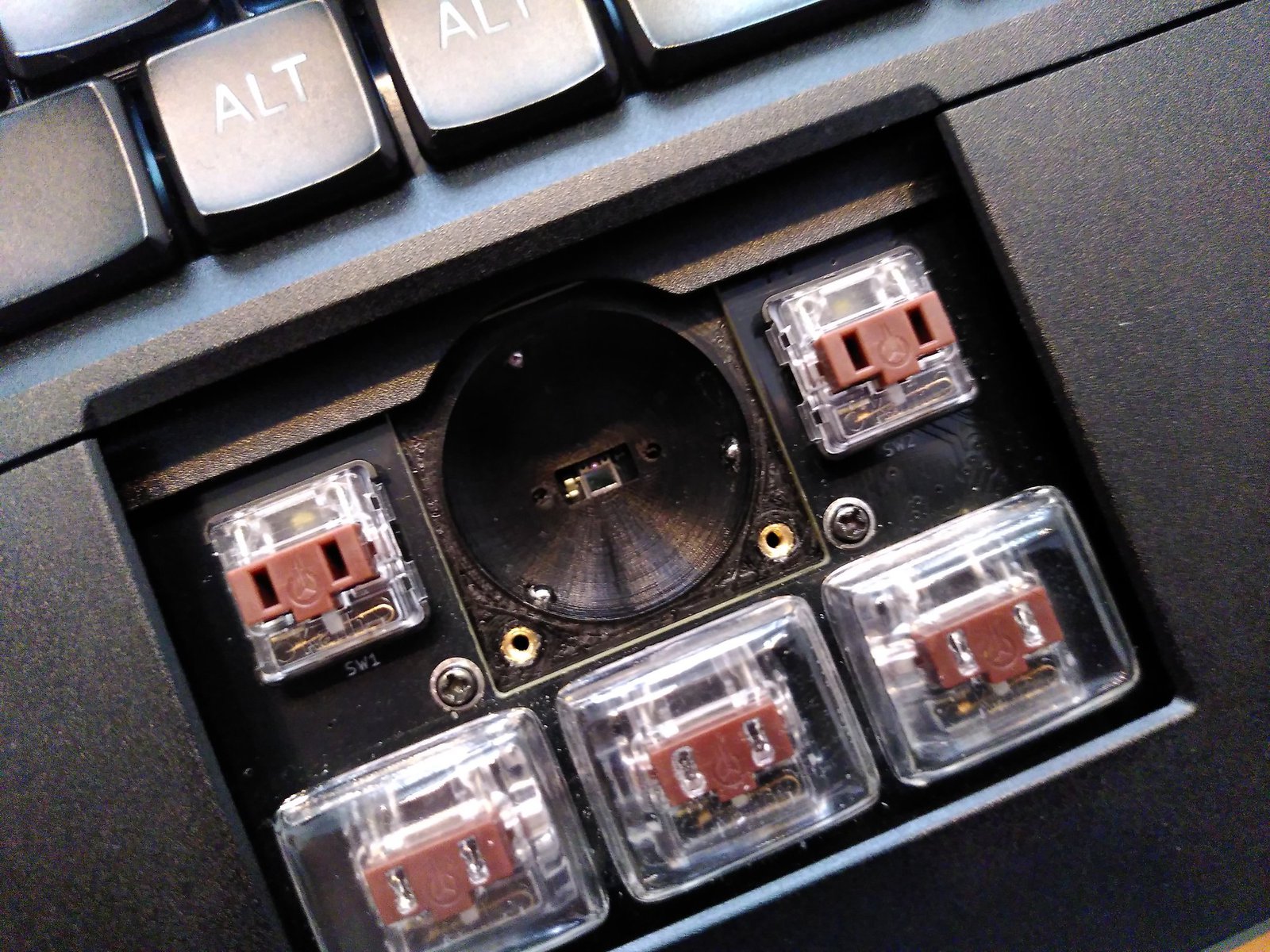 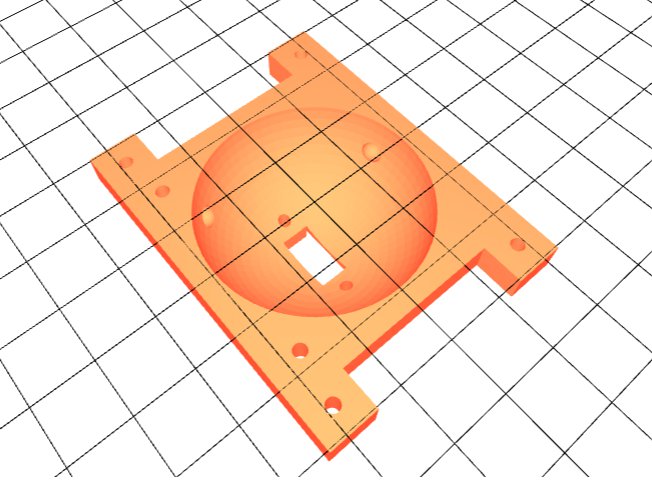 We have several ongoing research & development projects creating expansions and upgrades for the MNT Reform platform. One of them is the MNT RKX7 system-on-module. This completely open hardware module (designed in KiCAD) features a Xilinx Kintex-7 FPGA, 2GB of DDR3 memory and interface chips for USB, Ethernet and internal as well as external displays. 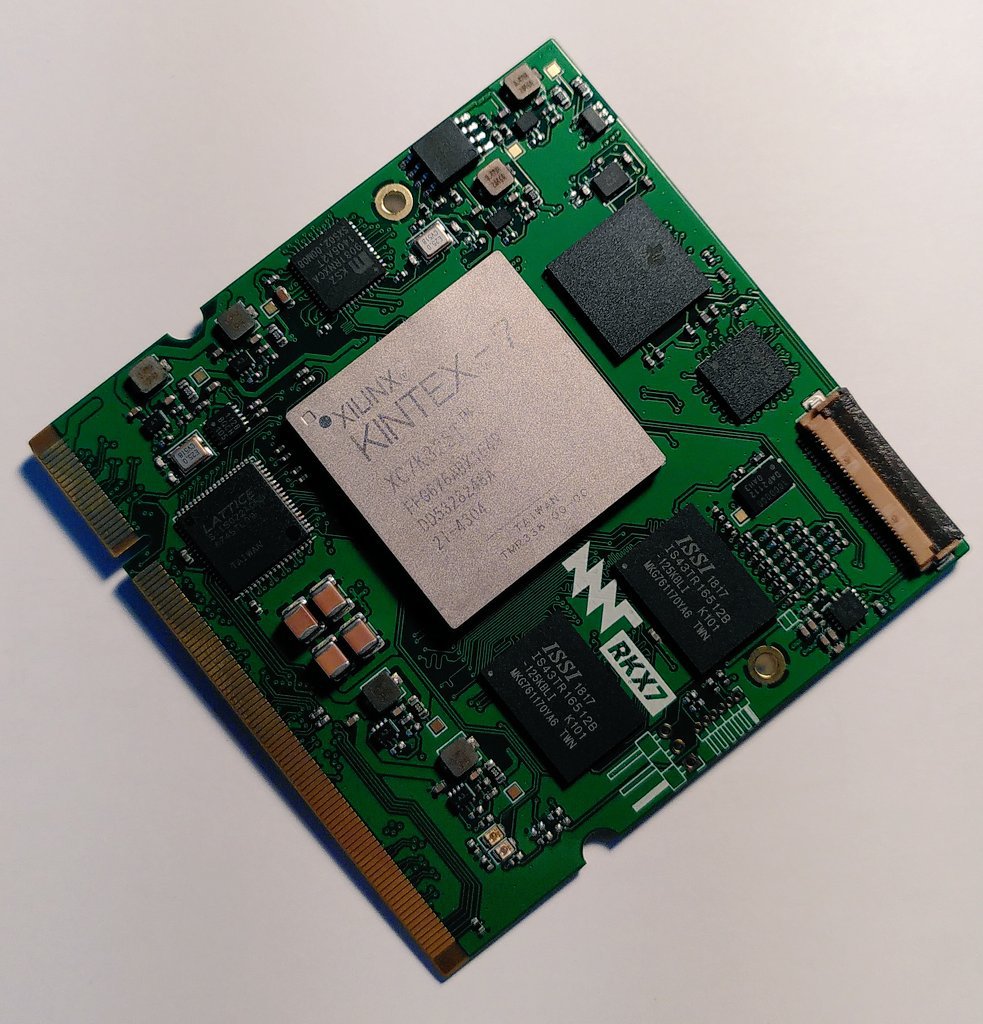 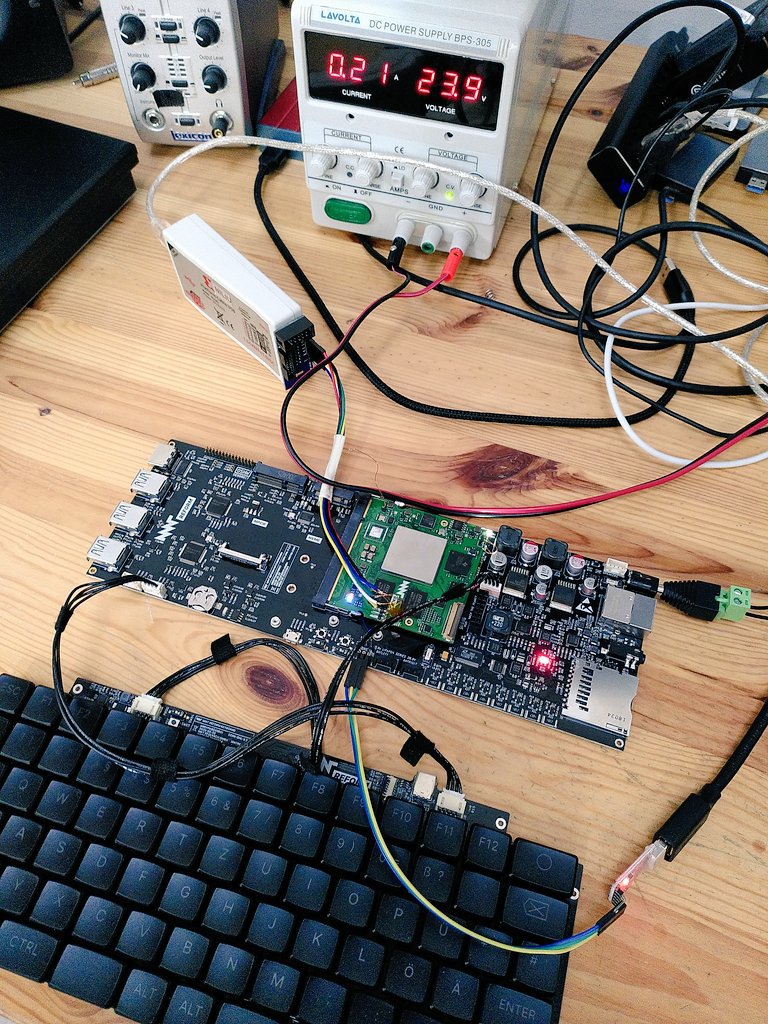 During bringup of the first prototype, Enjoy Digital reached out to me and immediately provided a configuration and the first bitfiles of a LiteX core with a RISC-V CPU and LiteDRAM memory controller — and it booted on the first try! We are now trying to get Linux to boot on the module and integrate at least one display. SD card and Ethernet already work. 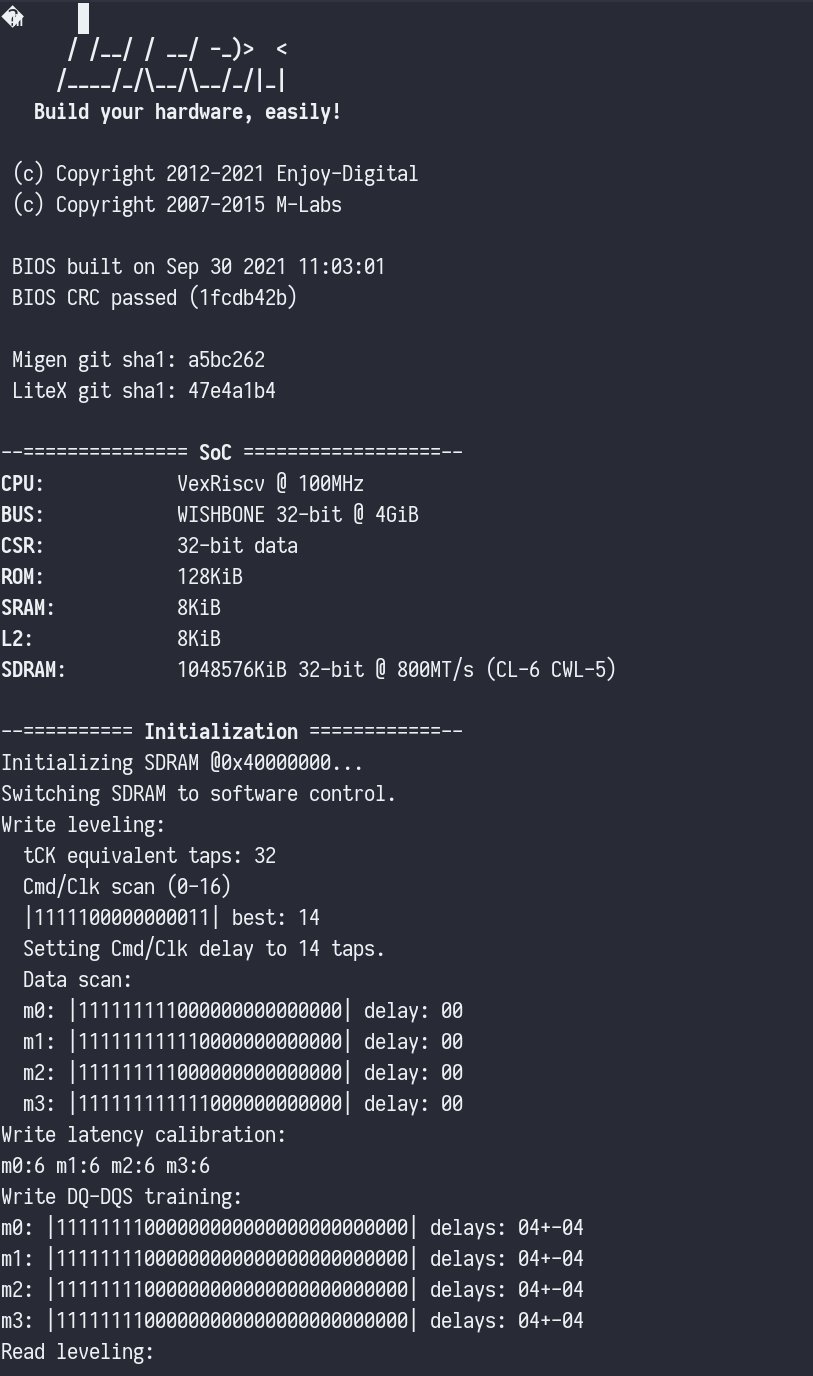 Our partners RBZ in Madrid have been hard at work assembling and bringing up the LS1028A processor module for MNT Reform. This module features the NXP LS1028A chip with 2 Cortex-A72 cores and 8GB or 16GB of DDR4, and it is a fully open hardware design created in Altium. The first version module already starts up when plugged into a MNT Reform motherboard, but the DDR4 calibration and testing is still a lengthy, ongoing task. 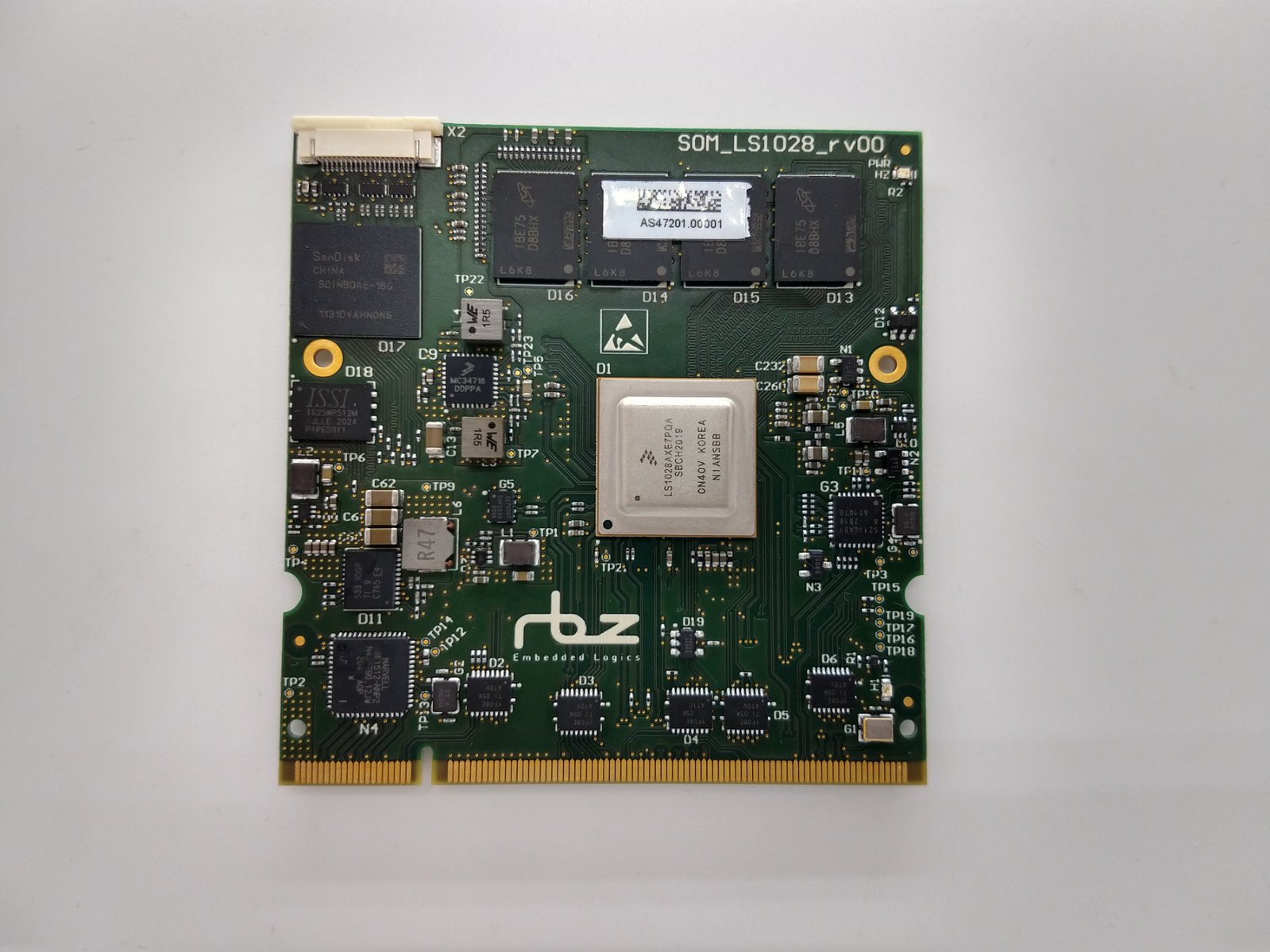 As MNT Reforms are distributed in the world, a number of reviews and articles have been published about them. Here are the ones we found especially notable:

Other Operating Systems and Linux Mainlining

Did you know that Genode Labs ported their highly flexible and secure Sculpt OS to MNT Reform? You can give it a spin by downloading the tiny SD card image here.

Moreover, bluerise has been working on an OpenBSD port to MNT Reform and managed to run an X11 desktop on it via HDMI. We ran into some trouble initializing the MIPI-DSI->eDP internal display chain in u-boot, though. If you have the necessary skills, any help with unsticking this effort is appreciated.

We are happy to see the MNT Reform world grow and are excited about the feedback and diverse uses and hacks that you come up with, and working hard on getting more devices out the door and into the hands of those of you who have pre-ordered. 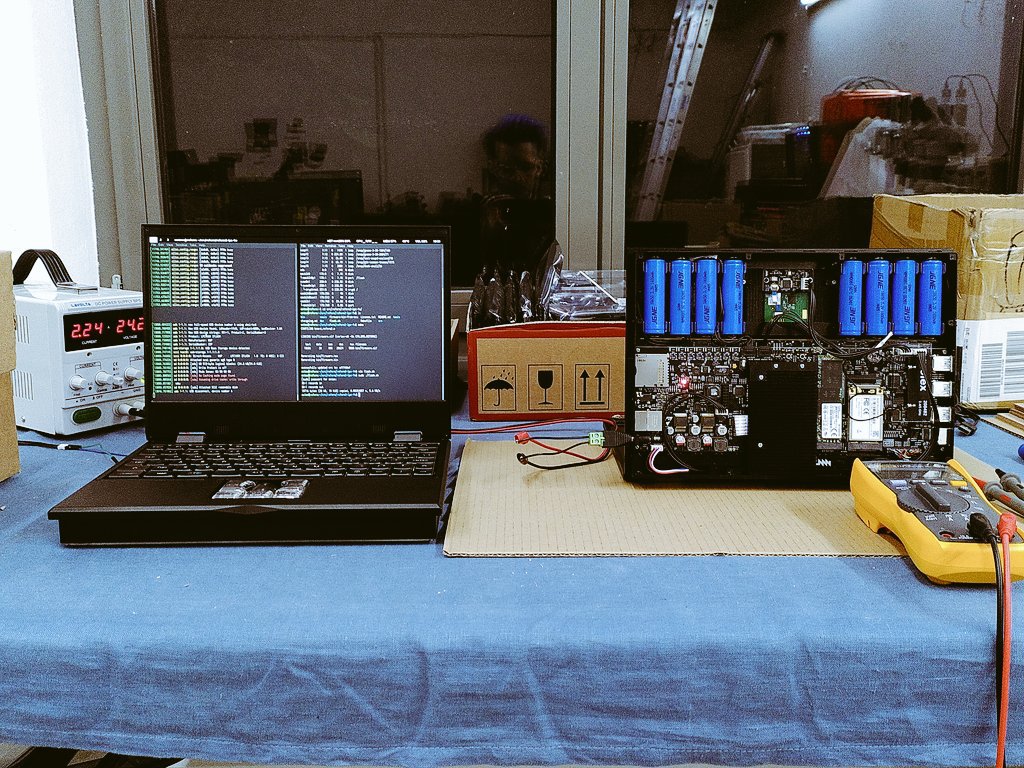