With the surprise release of the Raspberry Pi 4, I started receiving questions about compatibility with the LiFePO4wered/Pi+. Here’s what I found out!

Like most people, I hadn’t really expected to see a next generation Raspberry Pi until next year. Unlike most people, for whom a new Pi release is invariably a delightful event, I experience them with some trepidation. I don’t have any special relationship with the Raspberry Pi Foundation. On the contrary it seems sometimes, since they studiously refuse to acknowledge the existence of my hardware, talk about it, or promote it in any way while they’ve done so repeatedly for my competition. So I have no advance warning, and when a new release drops, I need to scramble and find out if the new thing works with my existing hardware or if my stock suddenly has become significantly devaluated.

In this case, the release happened on June 24 and I finally managed to pick up a unit from Micro Center on Friday June 28. I had some reasons to be worried since the new recommended power supply for the Pi 4 is a 5V/3A USB Type-C, and early reports indicated the new Pi to be a power hog. So I did some testing over the weekend.

Testing the LiFePO4wered/Pi+ powering a Pi 4

The first thing to check was whether the host software would work on the new Raspbian Buster which is required to support the Pi 4 hardware. On that front, everything went smoothly: the host software works just as it did before, and I had the system running from the LiFePO4wered/Pi+ in no time. 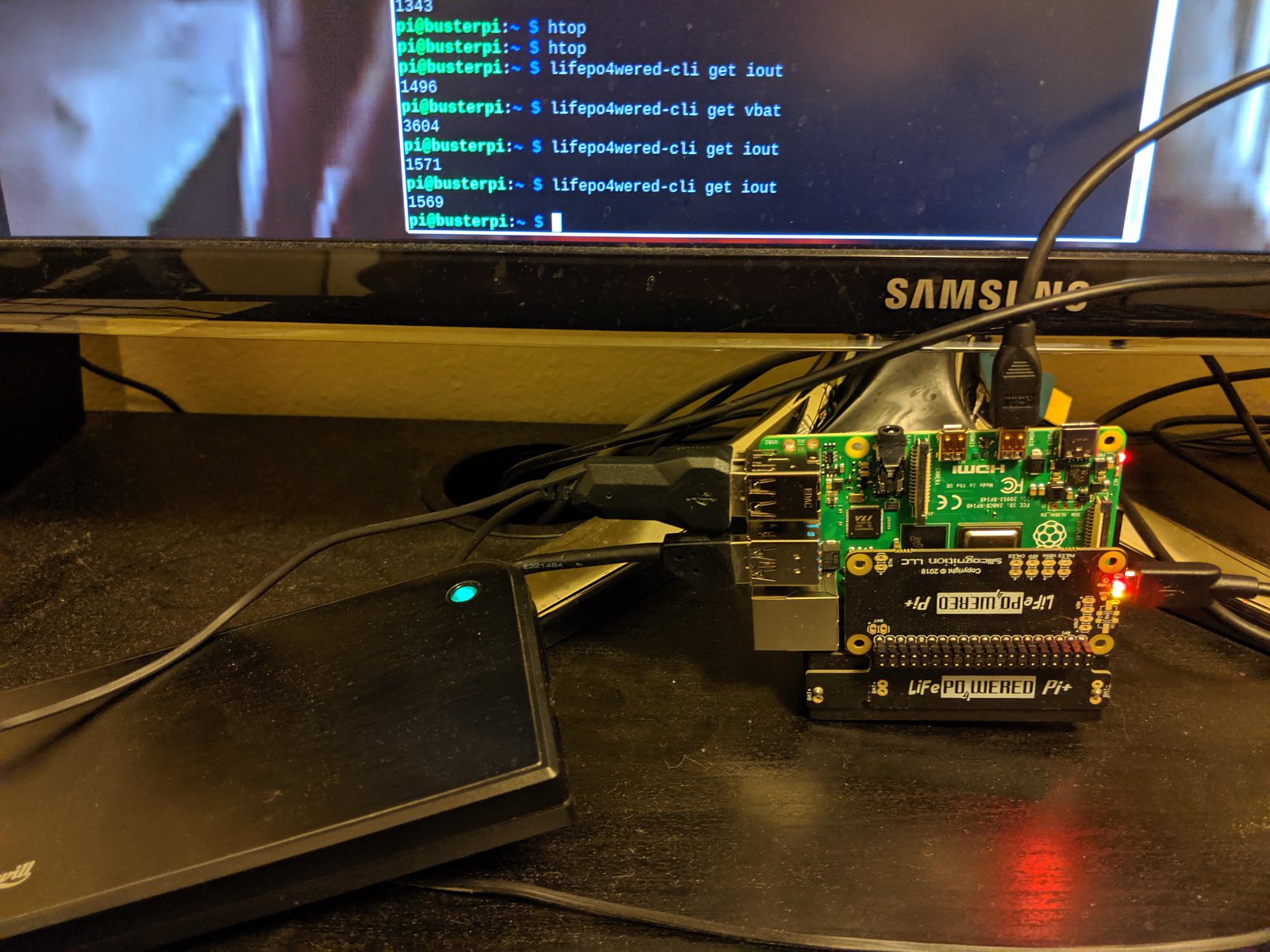 Then came the time to put some load on it. I used the stress utility to load the CPU, memory and I/O subsystem and ran continuous YouTube videos playing full-screen to add some load to the GPU. I also connected a USB hard drive for good measure, while I already had a backlit USB keyboard and mouse connected as well. I kept this running for over a day, with no issues other than that the system indicated with the on-screen thermometer icon that it was thermally throttled. The LiFePO4wered/Pi+ had no issue charging the battery (I was using a 3A charger) and reported a load current to the Pi of about 1.5 A. Since the LiFePO4wered/Pi+ is rated for a continuous output current of 2 A, this presented no issues, other than heat, as the thermal image below shows: 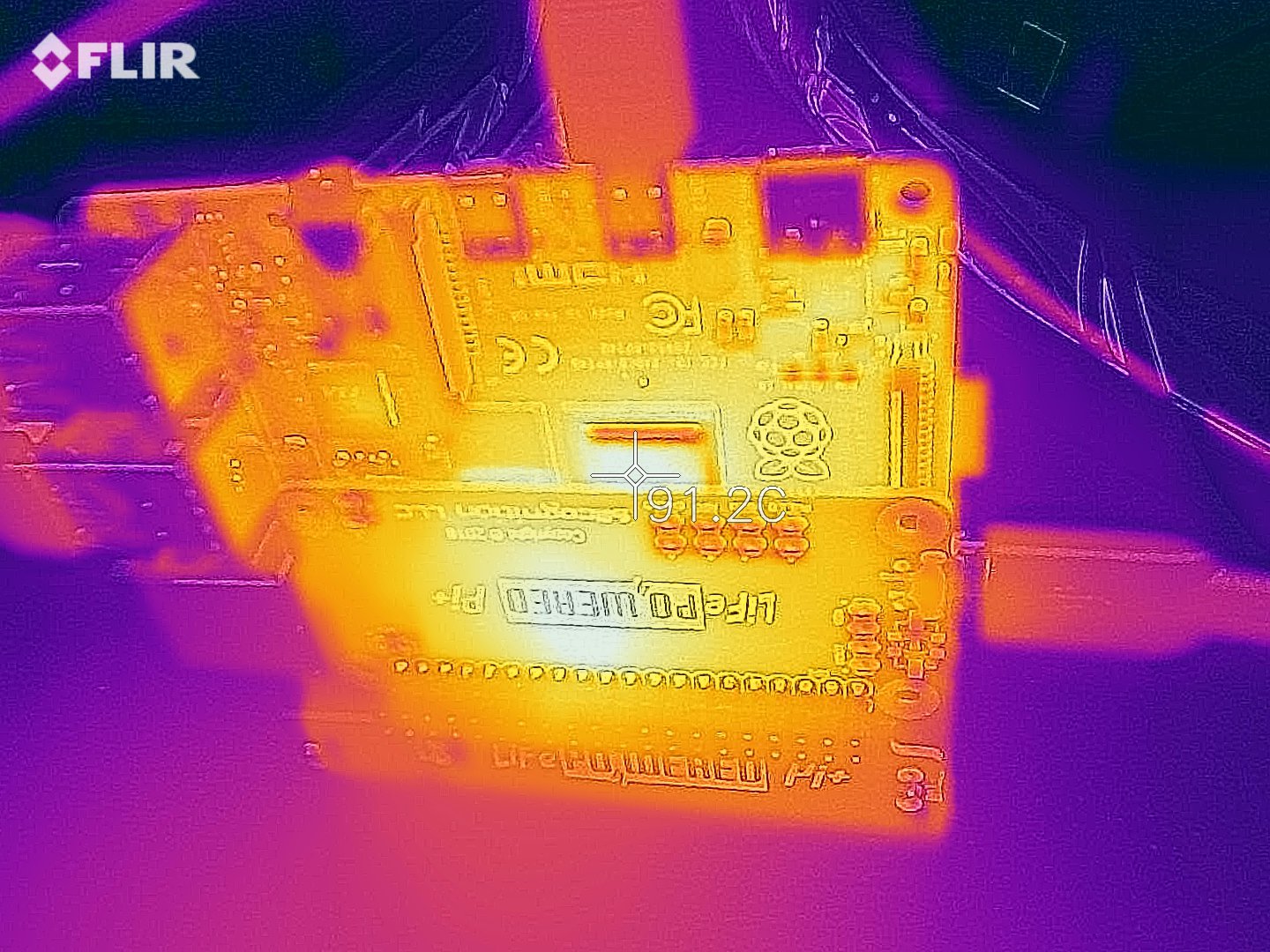 Both the Pi 4 CPU and the LiFePO4wered/Pi+ settled at a temperature of around 90˚C. When using a system like this at high load, it would obviously be wise to add cooling, but for testing, we like to abuse things. :)

All this testing had been done with the LiFePO4wered/Pi+ plugged in, which is the thermal worst case since the charging system adds its own heat. Now it was time to test whether the system could run from the battery and survive the transition from external power to battery power, which oddly some competing so-called "UPS"es have trouble with.

Below is a Youtube video of how that worked:

No issues! The system runs through the transition as if nothing happened, which is how it should be. I didn’t do a battery run-down test yet, but based on the load current I’m seeing, the 18650 battery should be able to keep running for about 15-25 minutes from battery power at this load, before initiating a clean shutdown and cutting power when shutdown is finished. The 14500 battery is not recommended for a high-power system like this and will likely not work reliably. If you need longer run-times, the LiFePO4wered/Pi+ can of course be used with a large external 3.2V LiFePO4 battery as well, and then it just becomes an issue of how much space you have available.

I will continue to do more testing, but it looks like the LiFePO4wered/Pi+ with 18650 battery is good to go for powering Pi 4 based systems. The only exception may be systems under super high load doing AI, GPU encoding at the same time with multiple high power USB devices attached, but I haven’t been able to make my Pi 4 draw that much current yet, and these should be exceptional cases. With the load currents I’ve seen, on what I consider a heavily loaded system, the LiFePO4wered/Pi+ still has 0.5 A to spare.

My design survived this possible bump in the road and the 1000 new units that are coming from China as we speak should be able to provide your new Pi 4 based systems with clean, reliable power as you’ve come to expect. Enjoy and go build some cool stuff with it! :)