Pilot run success and what’s next

TL;DR: The first 50 UHKs and palm rests of the pilot run were delivered, and according to the feedback we received it was a huge success! The recipients of the pilot run gave us a ton of feedback, so we’ll go over the issues they encountered, and tell you how we’ll fix them in upcoming batches. We’re raising the price of the palm rest to $55, and we’ll raise the rest of the items by 10% soon. We plan to deliver the remaining 1,950 UHKs of the first batch from February to April. We’re putting an increasingly heavy emphasis on finalizing and manufacturing the add-ons.

The Pilot Run Was a Huge Success

It’s one thing to design a product, and another to ship it to all over the world. András and I poured our hearts and souls into this project, we obsessed about the smallest of details, and even though we were definitely hoping for the best, we couldn’t know for sure how much you’d like the end product, so it’s safe to say that we were excited.

I’m happy to say that the feedback we received from the recipients of the pilot run was absolutely fantastic! You praised the overall build quality, the nice packaging, the onboarding experience, and the ease of use of Agent among other things.

Let me feature a couple of your tweets: 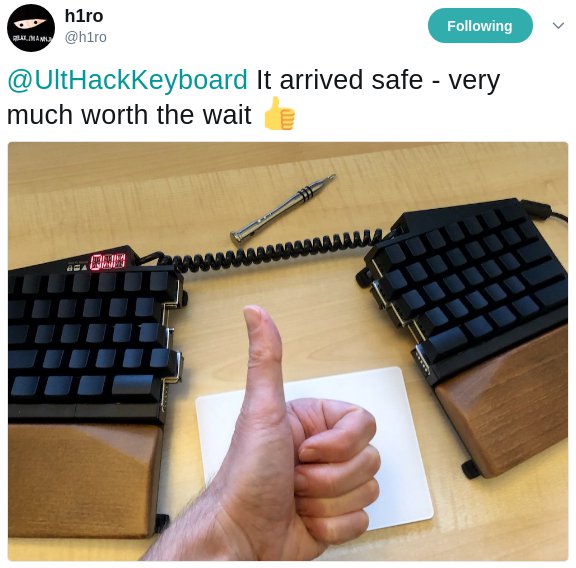 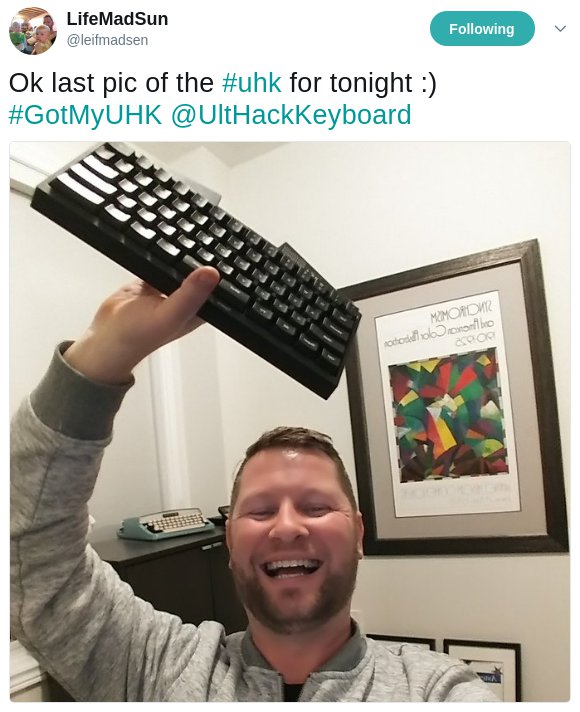 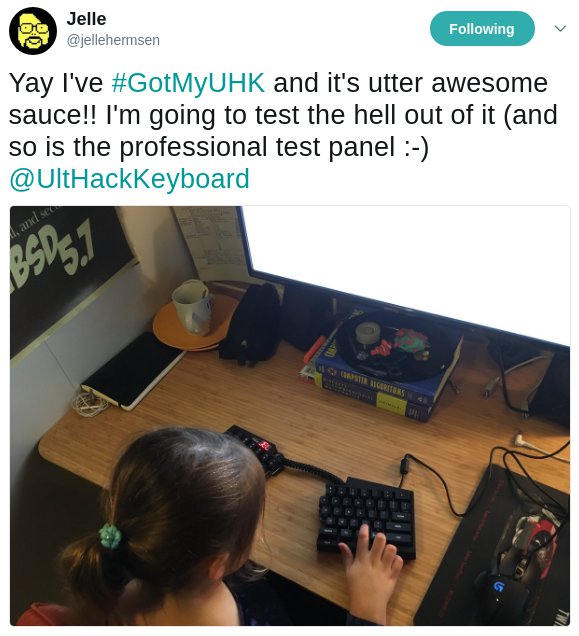 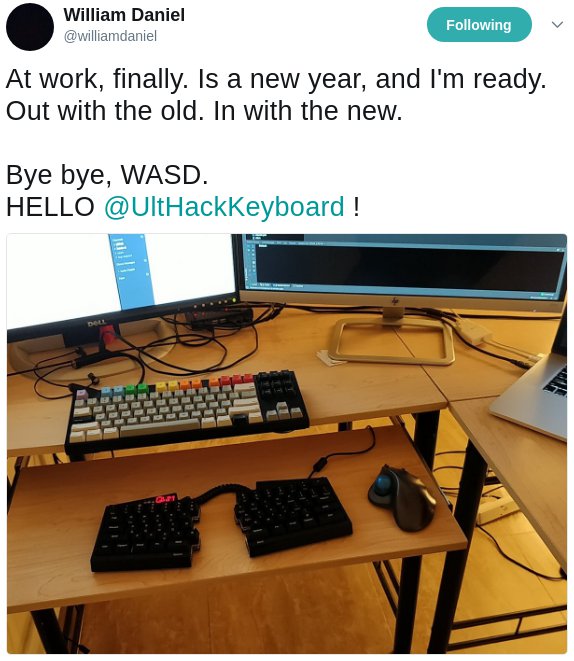 Thanks so much for the posts, everyone! Your enthusiasm and support have been overwhelming!

Despite its success, the pilot run wasn’t without issues. In the spirit of transparency, we’ll go through all of the issues you encountered.

There are two small boxes within the main UHK box which got smashed on four occasions out of the fifty pilot run units. We believe that some of these occurrences went unreported, and there may be more. This is what a smashed box looks like: 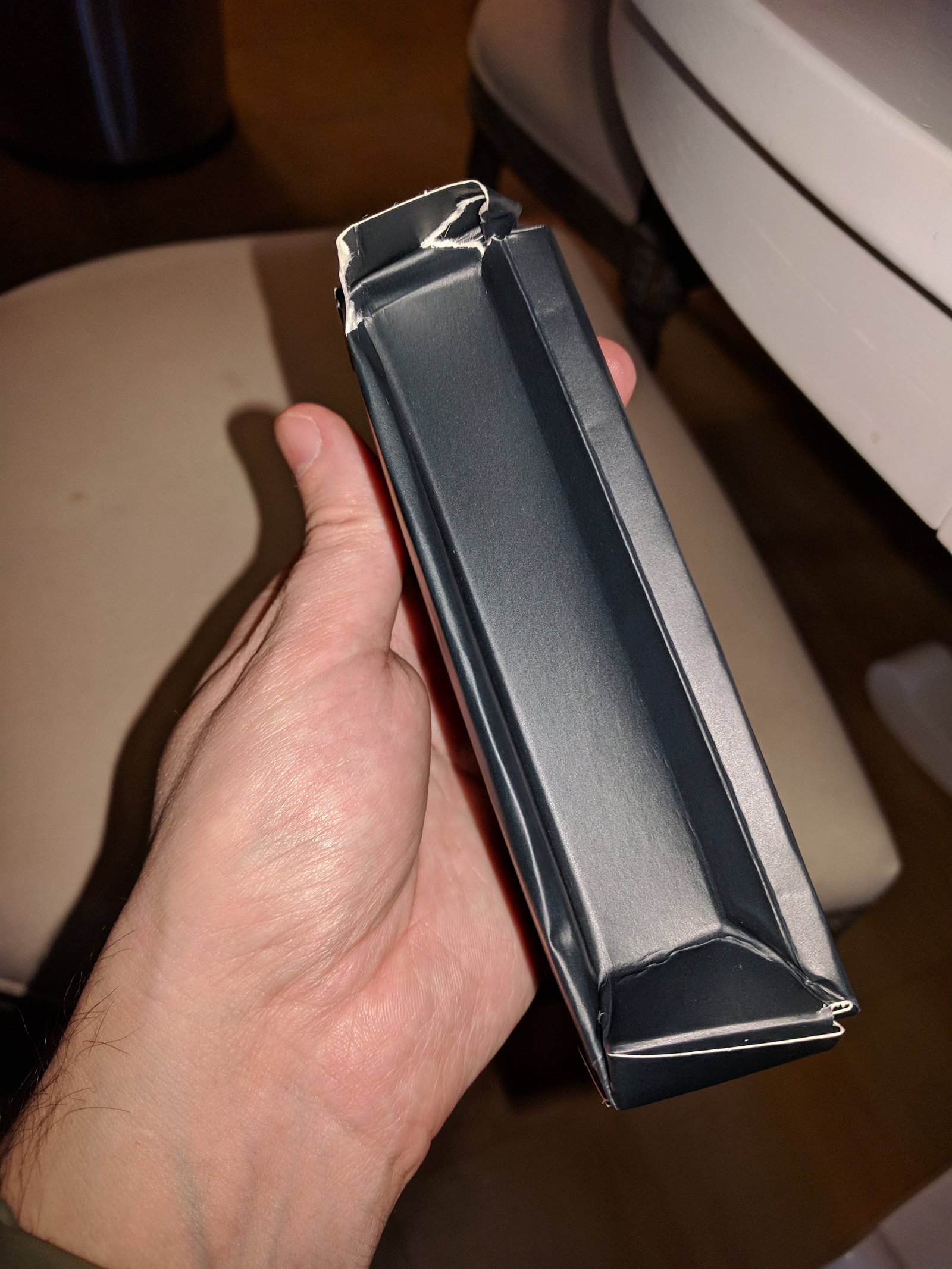 We spent a ton of time and a fortune on packaging, so this is a big deal. Even worse, on one occasion, even the case of a keyboard snapped apart. Luckily, the owner managed to snap it back with a bit of pressure, but this doesn’t make the issue any more acceptable.

According to the reports we received, only USPS-shipped UHKs were affected. We’re not sure whether it was due to the holiday madness, or if it’s a general issue, but we reinforced the boxes, which will hopefully resolve this issue in the long run.

The mold has already been modified, so the edges should be smooth going forward. A backer reported that he easily managed to sand down the sharp edge, resolving the issue in no time. If you’re affected, you might want to do the same, but if you want a replacement case, please just let us know.

Some of you reported strange artifacts appearing on your LED display, which is a sure sign of a loose FFC cable.

The FFC cable connects the display with the left main board. Apparently, we could have done a better job connecting them during the assembly process. As a result, the cables of two UHKs got loose during shipping. We’ll try our best to more thoroughly assemble future batches.

This issue called for our first ever repair guide. We have already emphasized the importance of repair before, and this was the golden opportunity to follow our words up with action. Both affected backers were able to fix the issue using the guide and they even contributed to it. Thanks so much!

Just to get things straight, we don’t expect anybody to repair his/her UHK, but the opportunity is there, and we encourage repair in general. It’s certainly much faster than sending it back and forth to the other side of the world, and especially useful after the warranty period is over.

On two occasions, visible artifacts were noticeable on some feet. 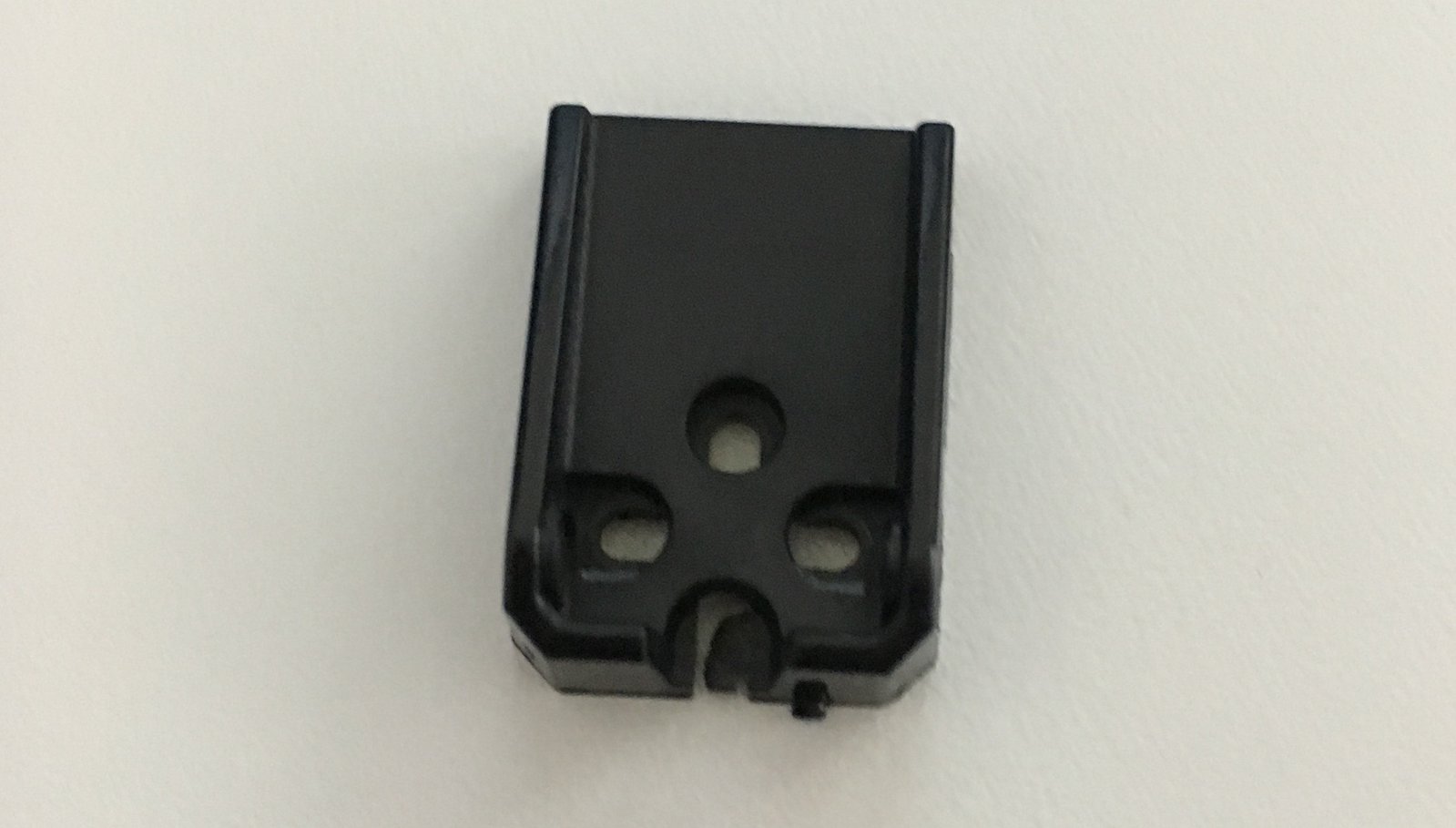 This is clearly an injection molding issues. We’ll do heavier QA in this respect.

A number of issues have been reported recently in the firmware and agent repos. The vast majority of these issues are not critical, but they affect usability in one way or another.

Understandably, we’ve been mostly busy with the critical issues. The most critical was a firmware issue that made the UHK freeze after a while. This was really annoying because it was super hard to find the root cause of it. Luckily, it looks like we’ve been able to resolve this, and it shouldn’t affect more people.

There was another critical issue in which the left keyboard half got bricked during the firmware update process. I’ve made the update process more robust, and improved the update script, which unbricked the unit. This script feature will be integrated into Agent soon. The UHK should very rarely get bricked, and when it happens it should always be unbrickable.

Going forward, we’ll be addressing all of the issues of the agent and firmware repos, but there’s a lot on our plate nowadays, so some may take a while. We’re doing our best.

All Hail Our Contributors

Mikko Lakomaa, an early contributor of ours, switched into high gear after receiving his UHK, and implemented two much-welcomed issues. Thanks to the fruits of his labor, now we can adjust mouse speed and LED brightness via Agent. 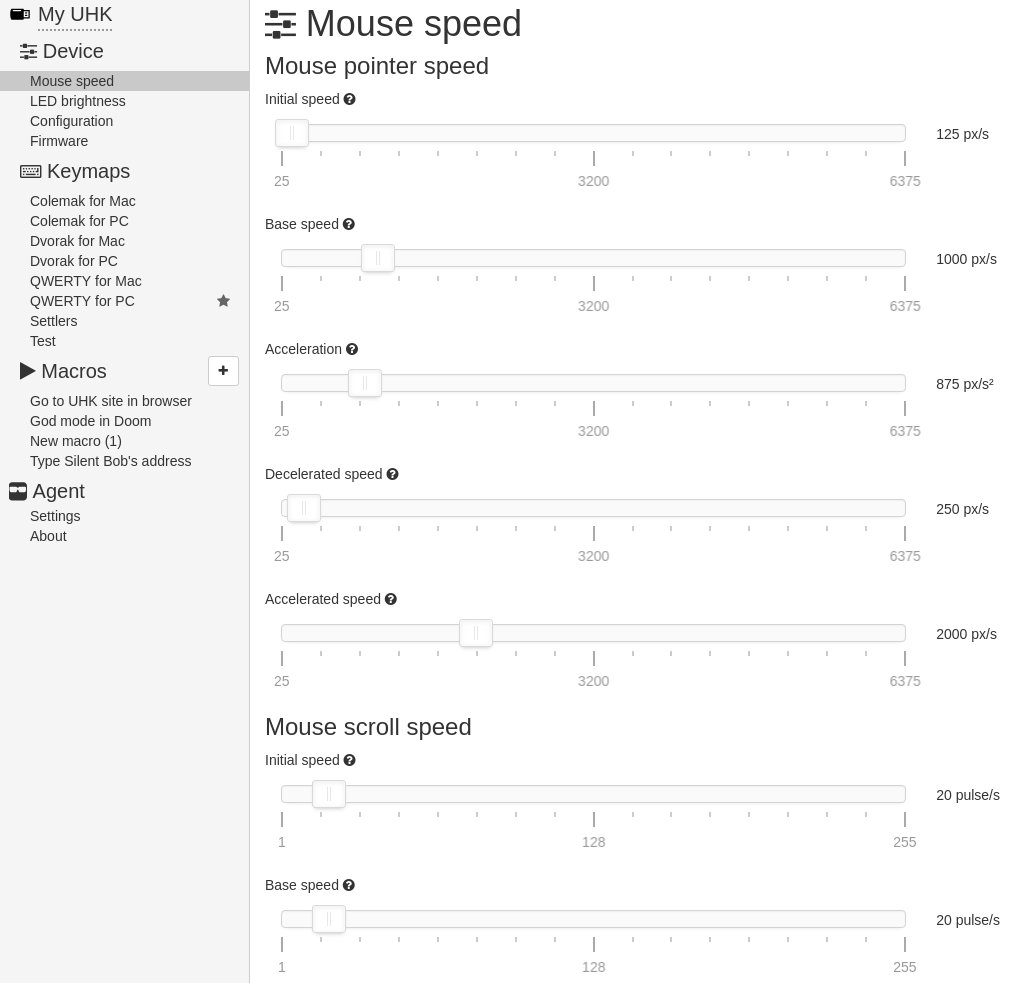 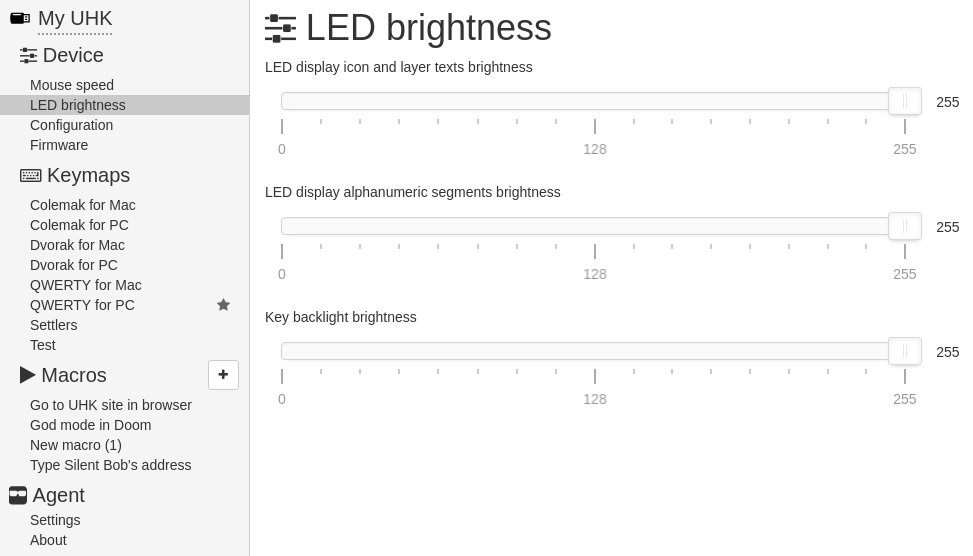 Thanks so much for your contributions, Mikko! It’s nice to see Agent improving so rapidly.

Effective immediately, we’re raising the price of the palm rest to $55, and we’ll raise the rest of the items by 10% soon. Let me explain why.

When we originally envisioned the UHK palm rest, its design wasn’t finalized, and we weren’t sure about the materials and technologies we’d ultimately use to craft it. We were also unfamiliar with the costs involved. As the design progressed, we were consistently moving toward an increasingly high-end, premium product which inevitably added to its cost, so much so that up until this point we haven’t had any profit on the palm rests when selling them for $30.

For what the palm rest is worth, \$55 is still a bargain considering the market prices. If you search for “wooden wrist rest”, \$40 is a usual price tag, but those palm rests are made of one wood piece, not two pieces, don’t feature powder coated black plates, and their geometry is less ergonomical (simpler, thus cheaper to machine) than the UHK palm rest.

We’ll also soon raise the price of the other items by about 10%, including the UHK, extra keycap sets, extra cases, and the add-ons. This is justified by the heavy weakening of the US dollar during 2017. We pay our suppliers primarily in Hungarian forint, so this very much affects us. 10% is actually less than the weakening of the dollar which is about 15%, so we’re trying to not raise prices too heavily.

Nobody likes price increases, but we’d much rather take this route than sacrificing quality, or allocating less funding for R&D. We hope you understand and resonate with our mindset.

Expected Delivery and What’s Next

Going forward, our most immediate goal is to deliver the 1,950 UHKs and accessories (everything but the add-ons) of the first batch. We expect to deliver these items from February to April, and then the second batch will closely follow.

Our assembly operation is admittedly micro-scale compared to the assembly lines of China. As we previously stated, instead of hiring a Chinese OEM for assembly, we opted to set up our own assembly line in Hungary and operate it in the long term. This has numerous benefits, like rigorous QA and direct control, but the downside is that the throughput of this line is rather low.

It wouldn’t make sense to massively scale up production because the accumulated preorders translate to a huge peak regarding assembly. It’ll considerably settle down after delivering the pre-orders, so hiring a bunch of people only to fire them soon afterwards doesn’t seem like a good idea.

We plan to keep assembly going continuously, and ship so-called mini batches on a weekly basis. We’ll remind you in a future update to change your shipping address before orders start going out, but please do check/change your current address by going to your Crowd Supply account.

As for the add-ons, fear not, we didn’t forget about them. We’ll be allocating more and more resources to finalize and manufacture them. András has been working on them recently, and this is the latest, and probably final design of the trackball module. 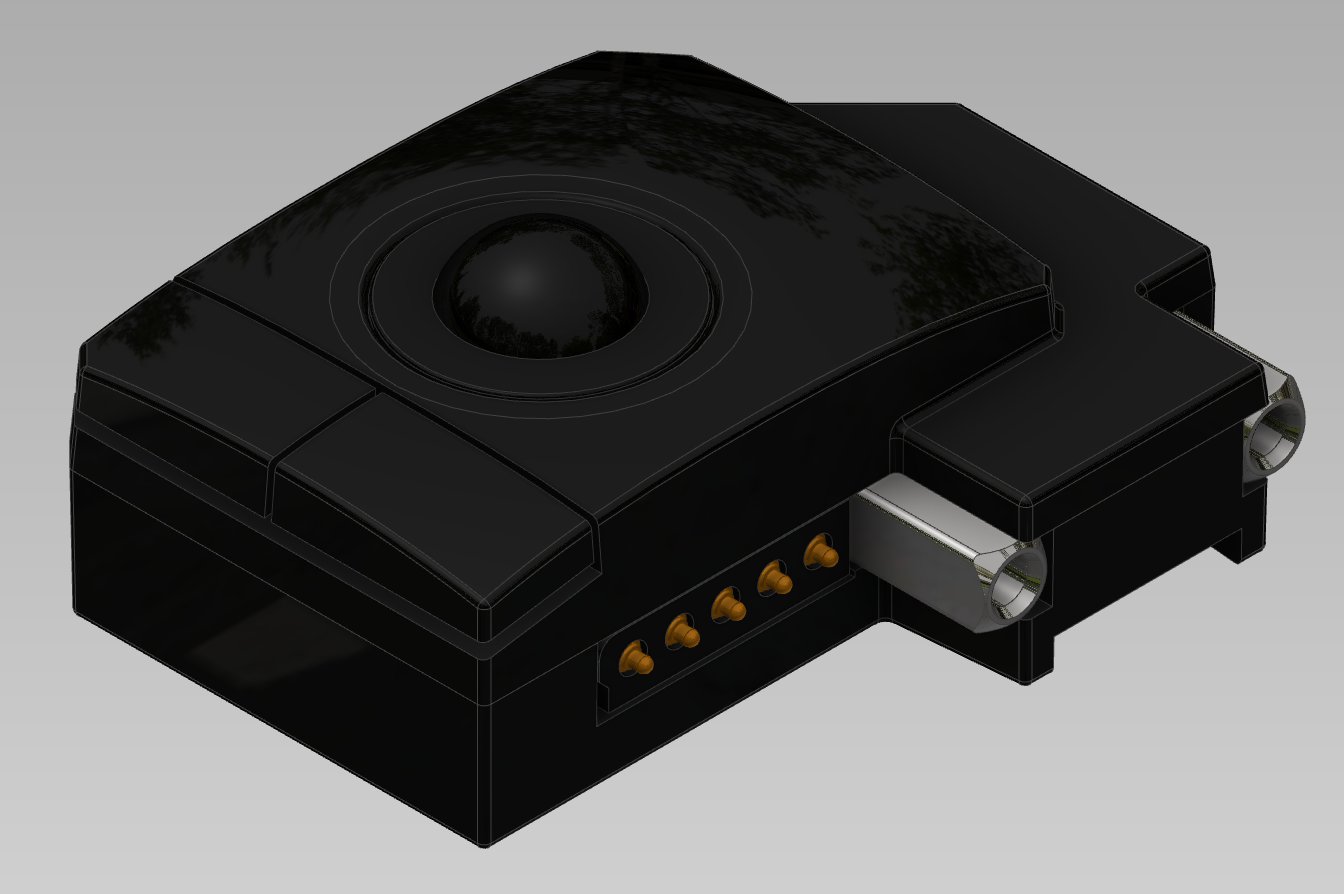 I think András did a great job designing this add-on. I cannot wait to see it work and give it a whirl (pun clearly intended).