Giving Shape to the Void

Let’s start with some good news: we finally found a CM that can ship The Skull with batteries. Hooray! And so…

In collaboration with our CM and other partners, we traveled the world collecting silica sand, limestone, kaolin clay, fluorspar, colemanite, and dolomite. We melted them down using an enormous furnace and extruded the resulting mixture through bushings to create tiny strands of glass fiber. We then wove those fibers into a delicate fabric, cut it into sheets, soaked them in epoxy resin, sandwiched them between two pieces of copper foil, and smooshed it all together using a high-temperature lamination process.

Having thus taken our first step toward the manufacture of our production Skull PCBs, we then drilled some holes in the resulting FR-4 PCB Core material—luckily, there are only six of them: two for each eye and two vias—which we then electroplated using a chemical bath. Next, we coated both sides of each board with dry photosensitive film, exposed them to UV light through transparencies decorated with electrical trace patterns, and gave the whole thing another bath, this time in a developer solution. And then…bath time again! First, a Powerful Alakline Solution™ to remove unwanted copper (such a waste!), followed by a cleansing bath to remove all the chemicals.

And then it was time for the fun part. First, we covered the board with a white solder mask and treated it to another tanning session under UV light, which developed the ink and washed out the excess material, at which point we could apply the silk screen artwork using an industrial inkjet machine. Then came our favorite part. The final touch. A touch of class. A Midas touch, if you will: GOLD plating on the exposed copper pads to prevent oxidation and to ensure longevity. And, more importantly, to give The Skull her shiny golden tooth.

To conclude the process, we tested the boards with a flying probe, milled them into a skull shape using a CNC machine, scored them using a v-cutting machine, washed them with ultrasonic waves, and dried them off. And there they were! A pairs of Skulls per panel, ready for the next stage of production: Assembly.

As you can see, we put a lot of effort into this process. For some definition of we… 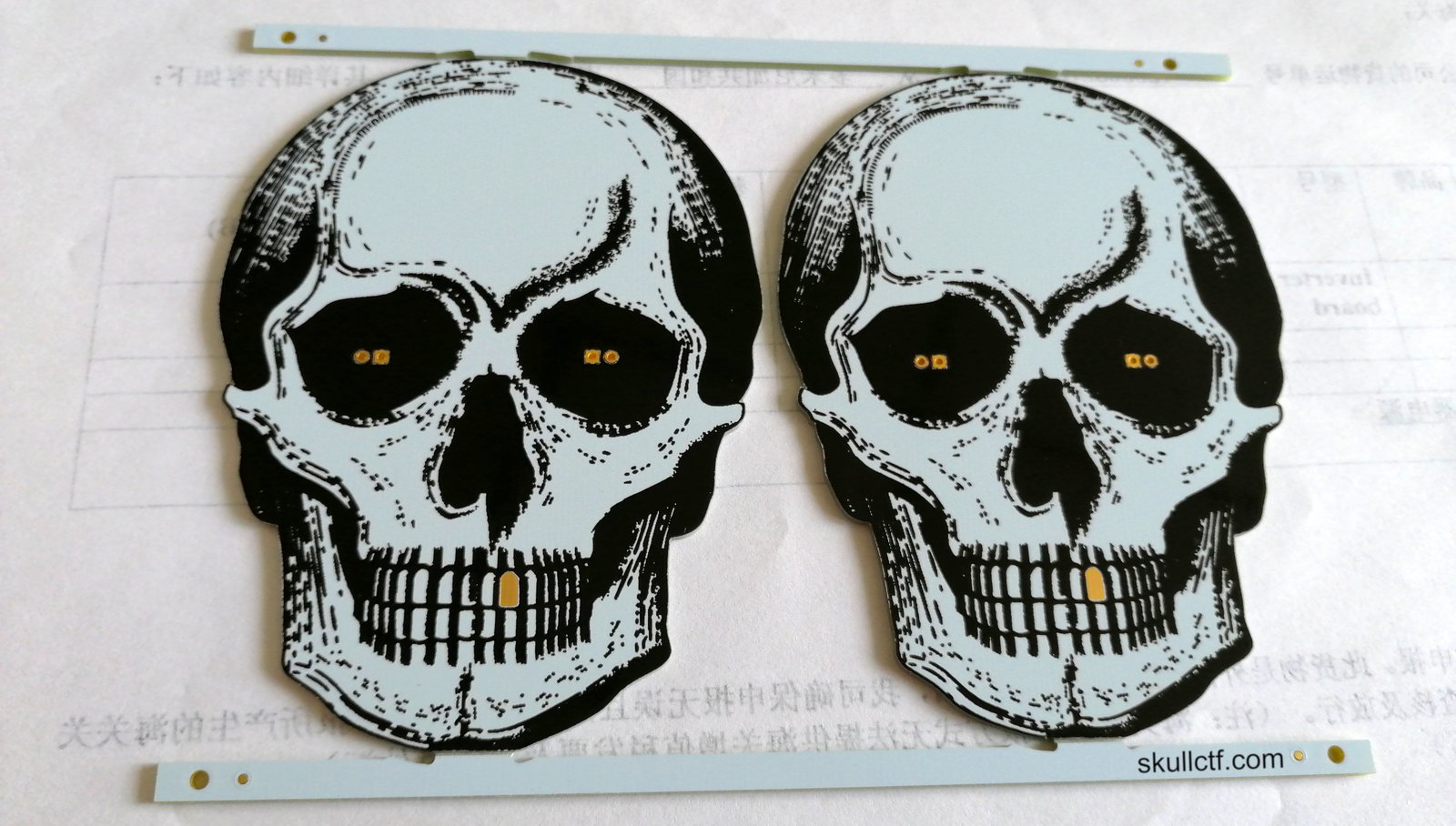 "We" also created our first After Dark Skull. Ironically, she’s much paler than her non-after-dark counterpart: 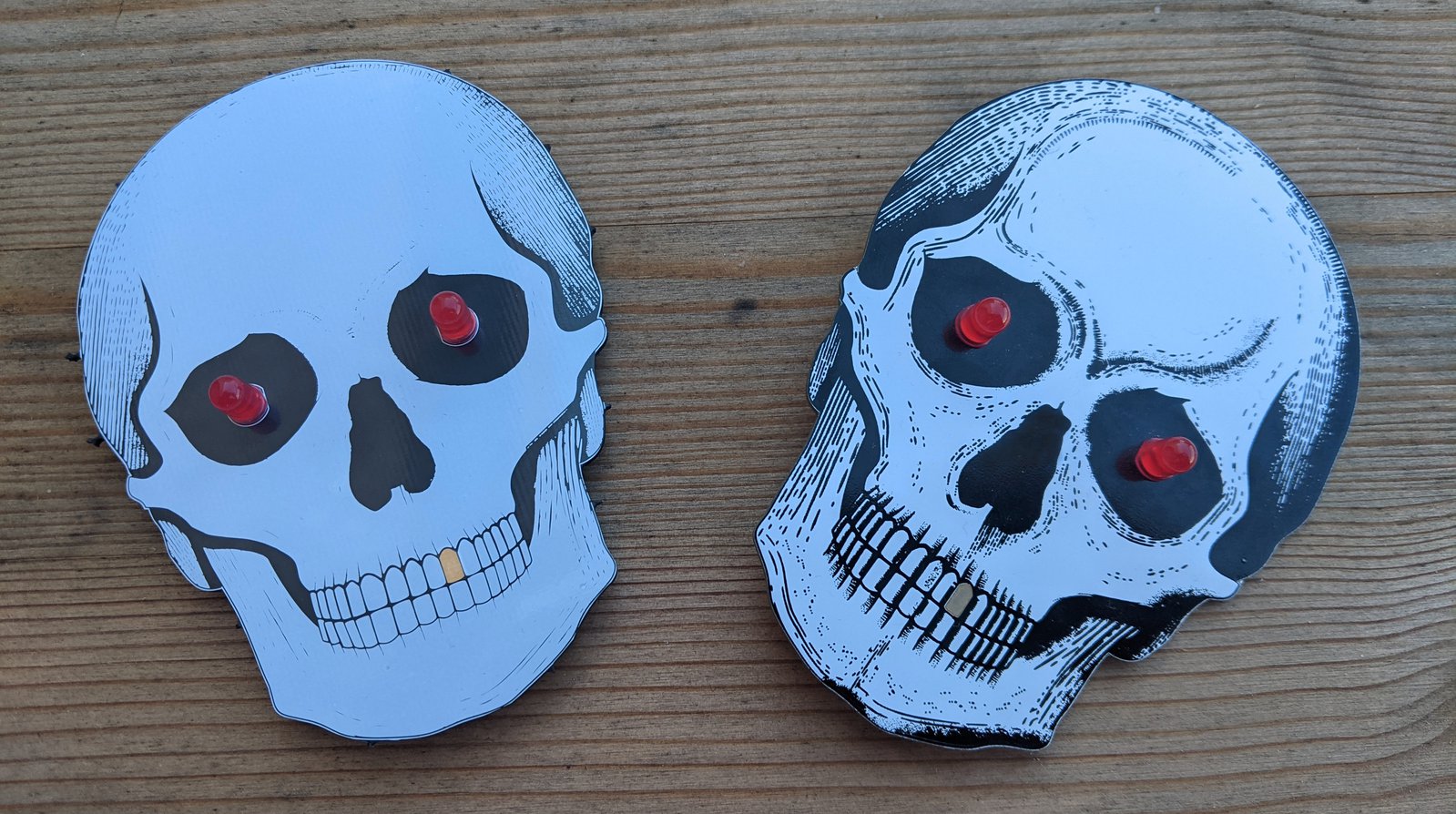 But her back side is gorgeous! 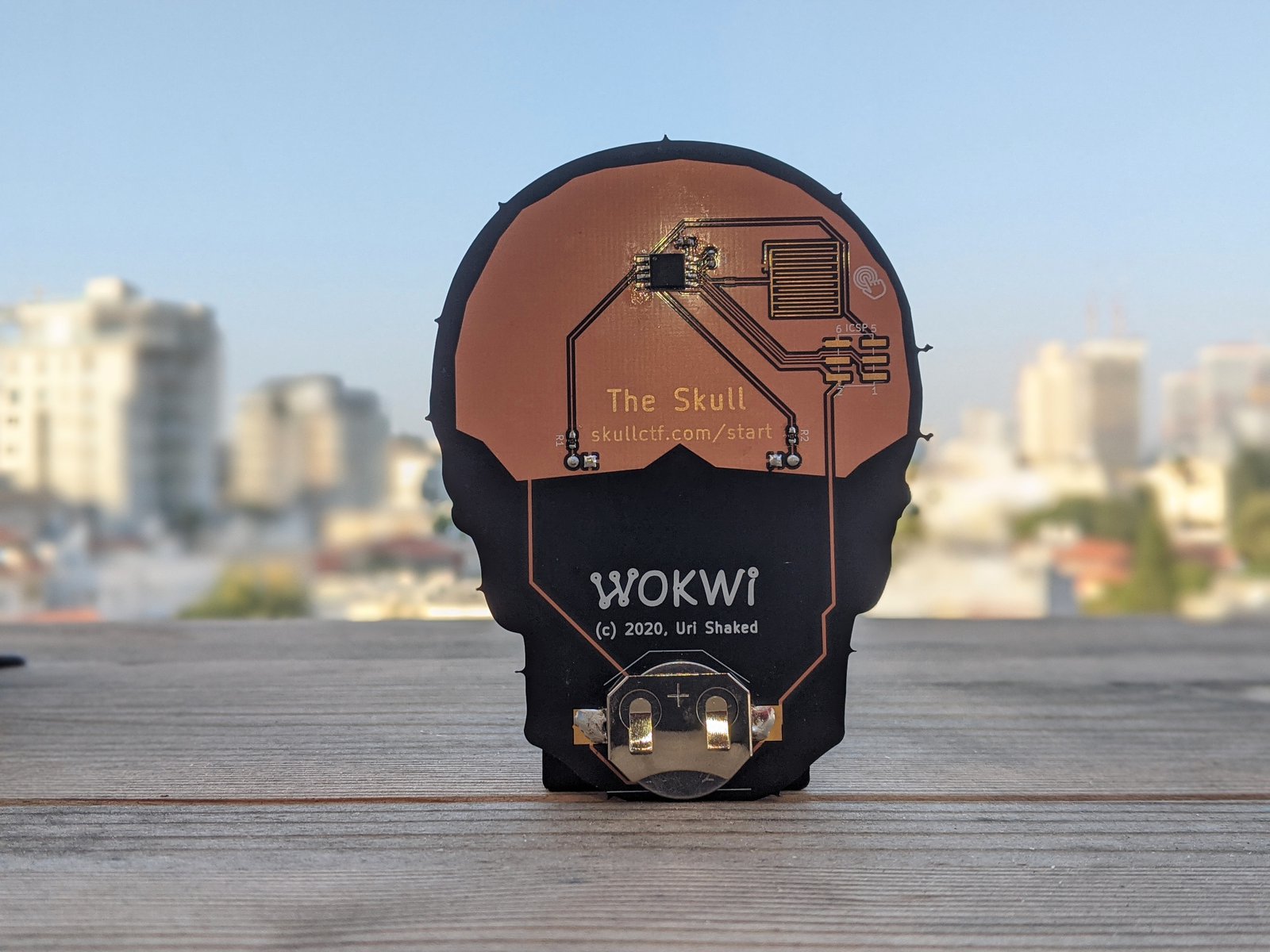 Thanks to OSH Park for sponsoring this experiment! If you want to make your own DIY After Dark Skull, the KiCad design files are now available on our FTP server. (Oh, and thanks to @helenleigh for the idea!)

Speaking of our FTP server, you can also find there the final version of The Skull’s firmware, as well as the HEX files we’ll be flashing to her brain. (Minus the flags you’ll be trying to capture, of course.) We’ve developed a rigorous, automated, in-house, firmware-testing rig that runs over 50 tests whenever we update the code. In addition to those, we’ve also done over a hundred manual tests in the interest of making our release as smooth as possible.

Finally, we asked two skilled hackers to solve the riddle, just to make sure it’s possible for people who aren’t, you know…us. And one of them managed to solve the first two steps, so we’re good to go! (We haven’t heard back from the other tester, and all of our attempts to contact her have been in vain. We hope she is well.)

You can find these files in the root directory of our FTP server, along with the shell script we use to flash them:

Now excuse us. We need to get back to work so we can finish making your Skulls!