Piotr here. I hope you are still staying safe and healthy.

It’s been a couple months since the last update and we wanted to fill you in on how the project is progressing.

The Glasgow campaign was split between "Early bird" and "Regular" Glasgows. The "Early Bird" consists of the very first 200 units, and it sold out in the first hour of the campaign. In a usual campaign, we reward the "Early Bird" backers by shipping their units earlier than the remainder of the orders. We accomplish that by buying the needed quantity of parts for the "Early Bird" build "off the shelf". This means we just buy them from the regular vendor stock that ships immediately after we place the order. These are slightly more expensive than the bulk orders we place for the full production batch, but we can start production faster with them on hand. Unfortunately, that did not work at all this time, because of the "Chip shortage" that we described in detail in our previous update.

We managed to secure a majority of the parts at this point, but we are stuck waiting on a handful of remaining parts to ship before we can actually begin assembly on either the early bird or the regular tier run of Glasgows.

But we have some good news. We have all the necessary parts to build the first 200 early bird Glasgows except for the PCBs and one single remaining part. We have not pressed go on the PCB just yet, just in case we need to redesign it with a different footprint to pivot to some different parts.

The last missing part is the TPS73101DBVT LDO Voltage regulator that we use to drive the GPIO bank settable voltage supply. We ordered this part several months ago. When we placed the order, the vendor indicated that they would be getting the part in a couple of days. Unfortunately, that did not happen, or they had a higher priority customer that they diverted the parts to. It is hard to know what happens behind the scenes. But all that matters is that we still don’t have a single one of the TPS73101 on hand.

The current estimate from the vendor is that we might get some of the TPS parts in January of 2022, and the remainder for the full production is scheduled for November 2022. Yes, that is more than a year from now! We also do not understand why it would take them 12 months to manufacture a new batch of these parts. Especially when they have a pending order. The vendors do not provide us with any explanation for why it would take so long either. We can only speculate.

We found a "scalper" vendor that still has some inventory of TPS73101, but they want us to pay a 10x price for it. This is something we are willing to pay to at least get the early bird units built, but the margins on the Glasgow campaign are not large enough to buy all the needed parts for the full Glasgow build. To give you an idea of the cost. The scalper price for this voltage regulator is equivalent to the price of the Cypress FX2 USB microcontroller. This single part would cost us $32,000 to get the full quantity from the scalper (the original price of the part would be $3,200). We are already paying more for all the other 54 parts on the BOM than the prices we used to set the Campaign pricing. The shortages allowed the vendors to increase their prices, not just the "scalpers". Obviously we did not budget for 10x price increases when we were setting up the campaign.

We are also looking into alternative parts. Unfortunately, the TPS73101DBVT is a pretty unique part. Besides reverse polarity protection it also has "foldback current limit". So we are having trouble finding a drop-in replacement. We are looking at one potential candidate, but it is not clear if the vendor has any stock either. Additionally, if we decide to swap the part we will have to go through the full process of prototyping and validation, to make sure that the replacement part behaves well and does not introduce any issues.

We know that a lot of you are in the industry and have connections to contract manufacturers. So if you or your CM happen to have some of the TPS73101DBVT from a previous project sitting somewhere on a shelf and are willing to sell them to us, it would be a HUGE help to push the project towards the finishing line. Please contact us, as any quantity helps us move towards our goal of finishing assembly.

The chip shortage is still in full swing. The delivery estimates for a lot of the parts that we need for Glasgow keep being pushed back and extended deep into 2022 by the vendors. We keep trying to find alternatives and different sources for parts. We even have friends living abroad checking the international markets for these parts.

The chip vendors are predicting that the chip shortage situation might start getting better by the end of next year. But we will have to wait and see how things evolve, as some earlier predictions were mentioning earlier times. We are still in a state of flux with the delivery times.

It is especially bad for small manufacturers like us, that don’t have the financial weight to throw around and push chip-manufacturer priorities in our favor. We did get a little help from some friends working for bigger companies to move us up the line. Without their help we would be in a worse situation than we are now. So big thanks to you, you know who you are. :D

The Rest of the Glasgow Build

For the remainder of the Glasgow PCB production, besides the missing TPS73101DBVT. We are also missing some other parts to be able to complete the 4000 units we need to produce for the campaign.

We are still waiting for:

Out of the above the TLV73312PQRVRQ1 DQFN 1.2V regulator seems to be the harder one to source. So we are considering replacing it with a part in a different package. We might end up with two separate PCB designs rocking two different supply voltage regulators. But we will see, maybe one of you has a reel of the regulators they want to get rid of? Please contact us with any leads you might have. ;)

The good news here is that we have all of the other 52 different parts that make up the Glasgow bill of materials (BOM). So with every small trickle of parts that get delivered we are getting closer and closer to assembly.

There is not much progress regarding the aluminium case. Because the case is no good without the main hardware, and we did not want to finalize it just in case we need to move anything around that will result in the need for enclosure changes.

As of last week we have all the connectors, and all other parts that had the potential to impact the case design. We are bringing our focus back to the case and working on some final touch ups. As soon as that work is done we will send out another update.

As you might remember, Piotr designed a dual Hyperram RAM-Pak add-in for the Glasgow during his weekly Twitch streams. Add-in means it fits inside the enclosure and is mounted on the auxiliary LVDS connector. It provides 16 Megabytes of external RAM that can be used by Glasgow applets. 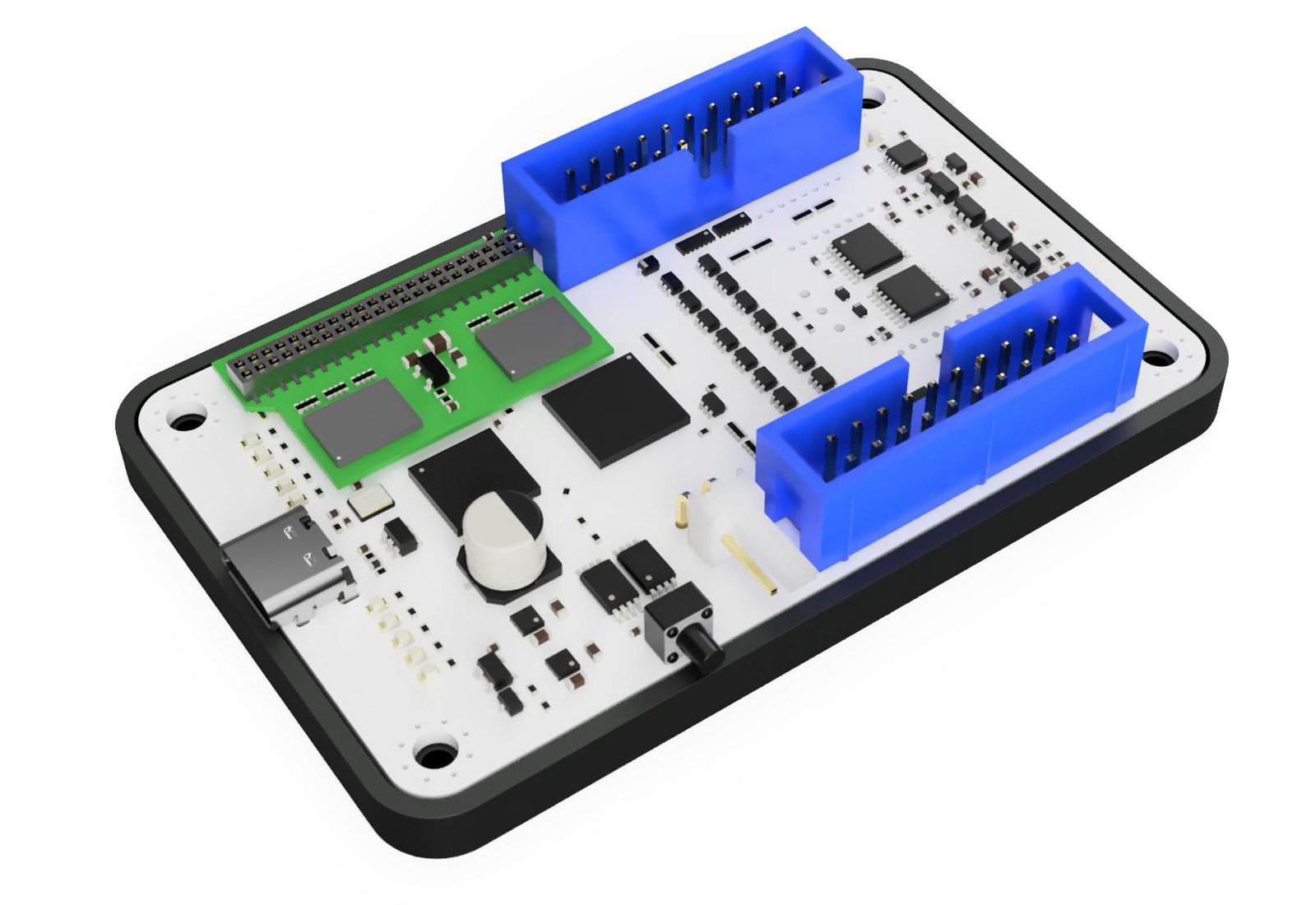 With some great help from Sylvain Munaut we have now validated that the hardware prototype Piotr made works. We placed an order for some prototype RAM-Pak panels. The PCB manufacturer did not like how some of the traces were routed between the header pins. Their requirement was to have at least 0.2mm gap between the pass-through pins and the traces. 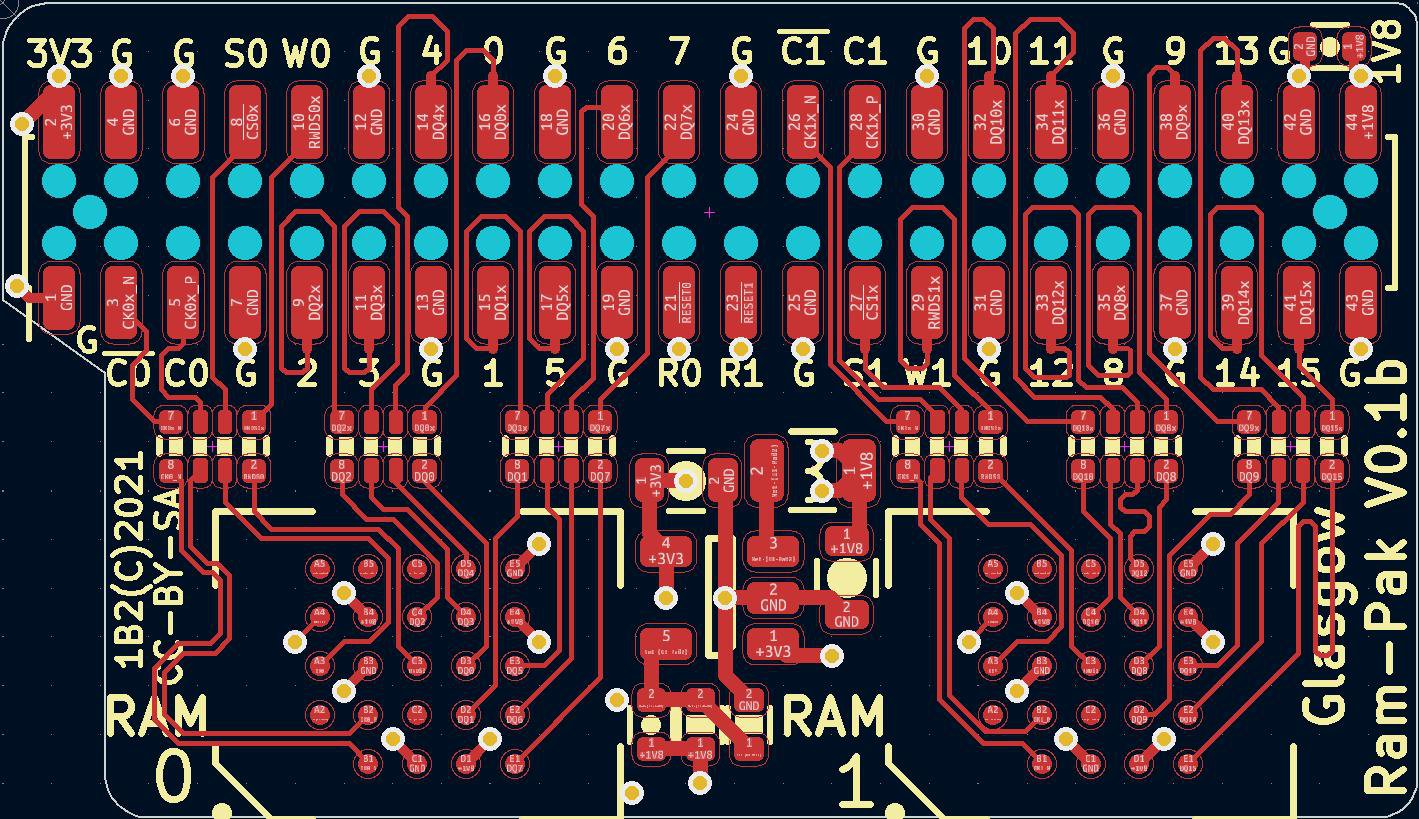 This resulted in Piotr having to reroute the RAM-Pak and redo the length matching on all the data and clock traces. But after that was done the PCB manufacturer accepted the design and the panels are now in production. 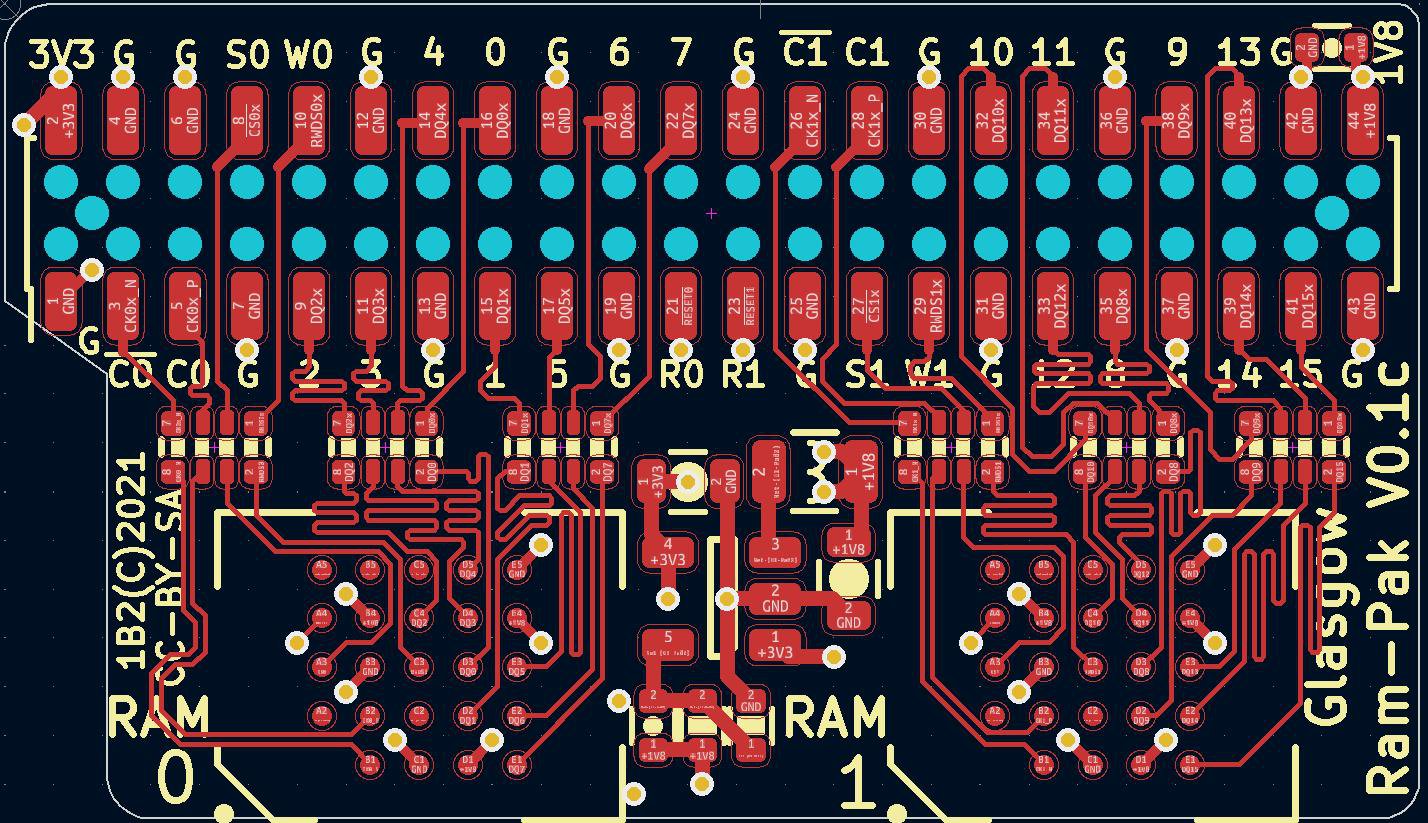 After the new and improved design is fully validated we will order a bunch of the parts for the RAM-Paks. When we know what the lead time for the RAM-Paks ends up being, we will evaluate ways you can pre-order the RAM-Paks for your Glasgows if you are interested.

That’s It for Now

As always. Thank you everyone for supporting the project and being patient. I know you are all eager to get your hands on the Glasgow. I can assure you all we are trying our best to get this project finished and the Glasgows delivered to you.

If you happen to have access to any of the parts listed above, and you are able and willing to sell them at a reasonable price. It would be a massive help to this campaign. Any leads are appreciated, please drop us a line.

Cheers,
Piotr and the Glasgow team