Piotr here. I hope you are all staying safe and healthy.

As you might have noticed, our original deadline for delivery of Early Bird Glasgow units has come and gone. I want to apologize that it took me so long to update you on the status of things. The reason is that I wanted to have more accurate data to give you a better understanding of the timelines.

tl;dr: Our usual process of ordering off-the-shelf parts for Early Bird rewards has not been going smoothly due to global chip shortages. Our vendors are extending their component-delivery estimates through the end of this year, and the whole timeline of the project has been shifted as a result. We are working hard to find alternative sourcing so that we can begin manufacturing Glasgows. We are still hoping to produce Early Bird units this year, but standard Glasgows might be delayed even further. Read on for (rather a lot of) additional details.

As you have no doubt heard, we are in the middle of a global integrated-circuit shortage. This affects the whole industry, not just us. The reasons for this shortage are fairly complicated, and they vary depending on the part brand. The main explanation is that, last year, car manufacturers caused a cascading chain of problems based on demand-estimate mistakes. I’ve tried to put together a summary of the approximate chain of events, based on the information I could find. Fundamentally, this is affecting everyone.

On top of these production shortages, electronics manufacturers turned to the regular, off-the-shelf market and started draining reserves so they could stash parts. (Toilet paper syndrome?)

I have read that narrative a few times, usually only supported by "an industry insider told us," so it’s not clear how true it is. But it’s certainly one possible explanation, especially for parts that are often used by the car industry, which would explain the very obvious lack of STM microcontroller parts in the market.

We’ve heard a few better reported incidents related to specific vendors, as well. For example, the Renesas IC factory had an equipment fire that took down their IC factory.

Another incident affected NXP, Infineon, and Texas Instruments. (TI is the vendor that has had the greatest impact on Glasgow, as we have a lot of TI parts on our BOM.) The already weakened supply of TI parts—thanks to whiplash in the car industry—was made worse by the winter storm that took Texas by surprise in February. That storm caused power outages throughout the state. TI runs some of their IC manufacturing plants in Texas and did not have sufficient backup power to keep their cleanroom systems running. That, in turn, resulted in contamination, lengthy downtimes, and the loss of parts that were in production at the time. Details are not easy to come by, as vendors are trying their best to downplay the impact, but the fact that TI parts have some of the longest lead times certainly tells a story.

I imagine there are other factors that contributed to this situation, as well. I suppose one lesson here is that large-scale failures typically have more than one cause. That, and…supply chains are complicated. :)

For reference here are some links for further reading:

Because the Glasgow campaign was so successful, we need to secure parts for 4000 Glasgows. As soon as we received campaign funds, we started placing orders for all of the parts we could get our hands on. Vendors shipped some of those parts to us, but they also canceled some—because they didn’t actually have the parts in stock—and extended lead times on others. This supply-and-demand problem has caused certain parts to become very scarce and dramatically increased prices for others.

Below are some photos of the parts that we managed to secure so far. It’s a lot of parts…but it’s not all of them. 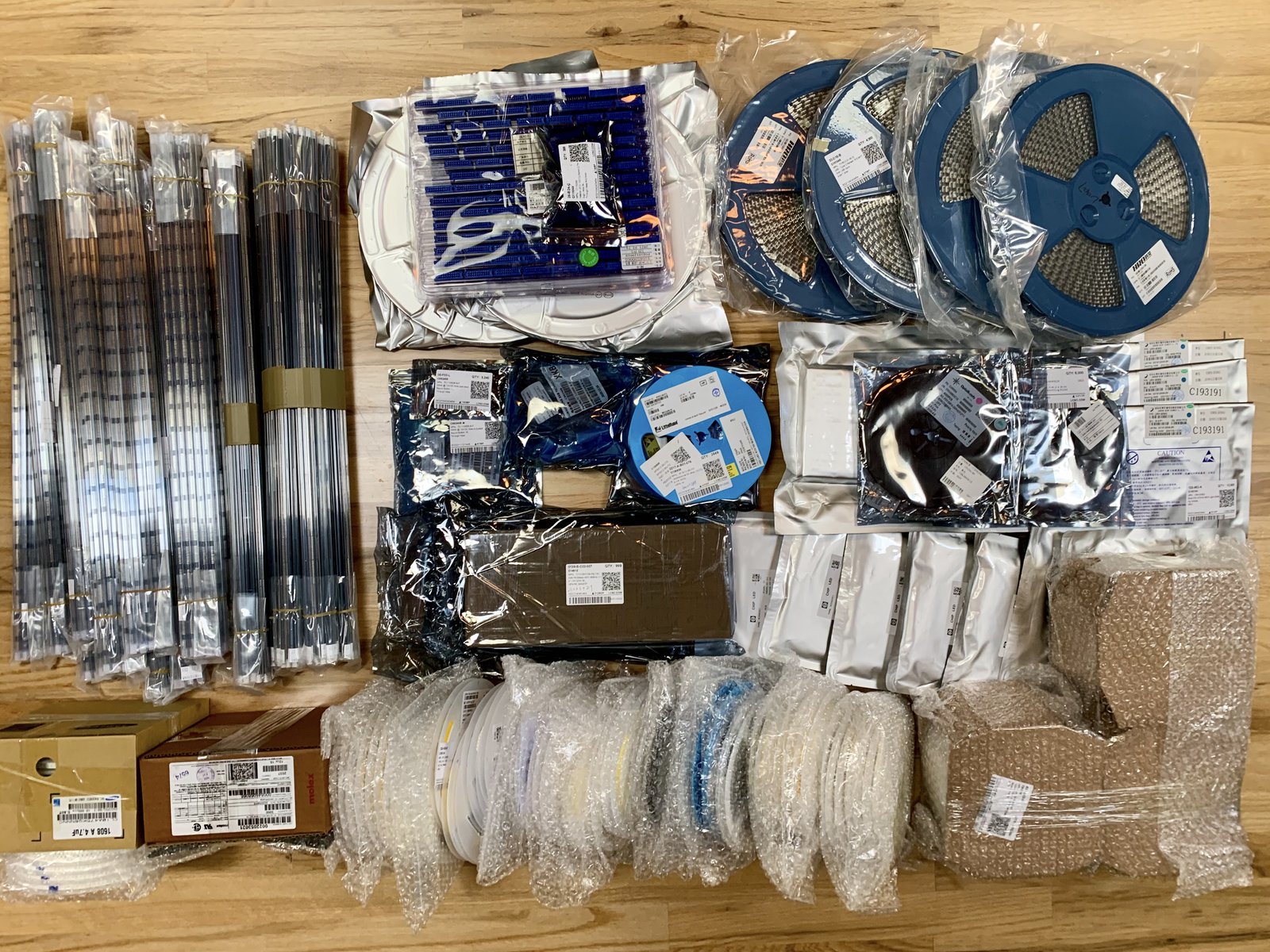 We got reels of USB Type-C connectors, blue shrouded IO-pin headers, and almost all of the passives we will need, as well as LEDs and some of the ICs 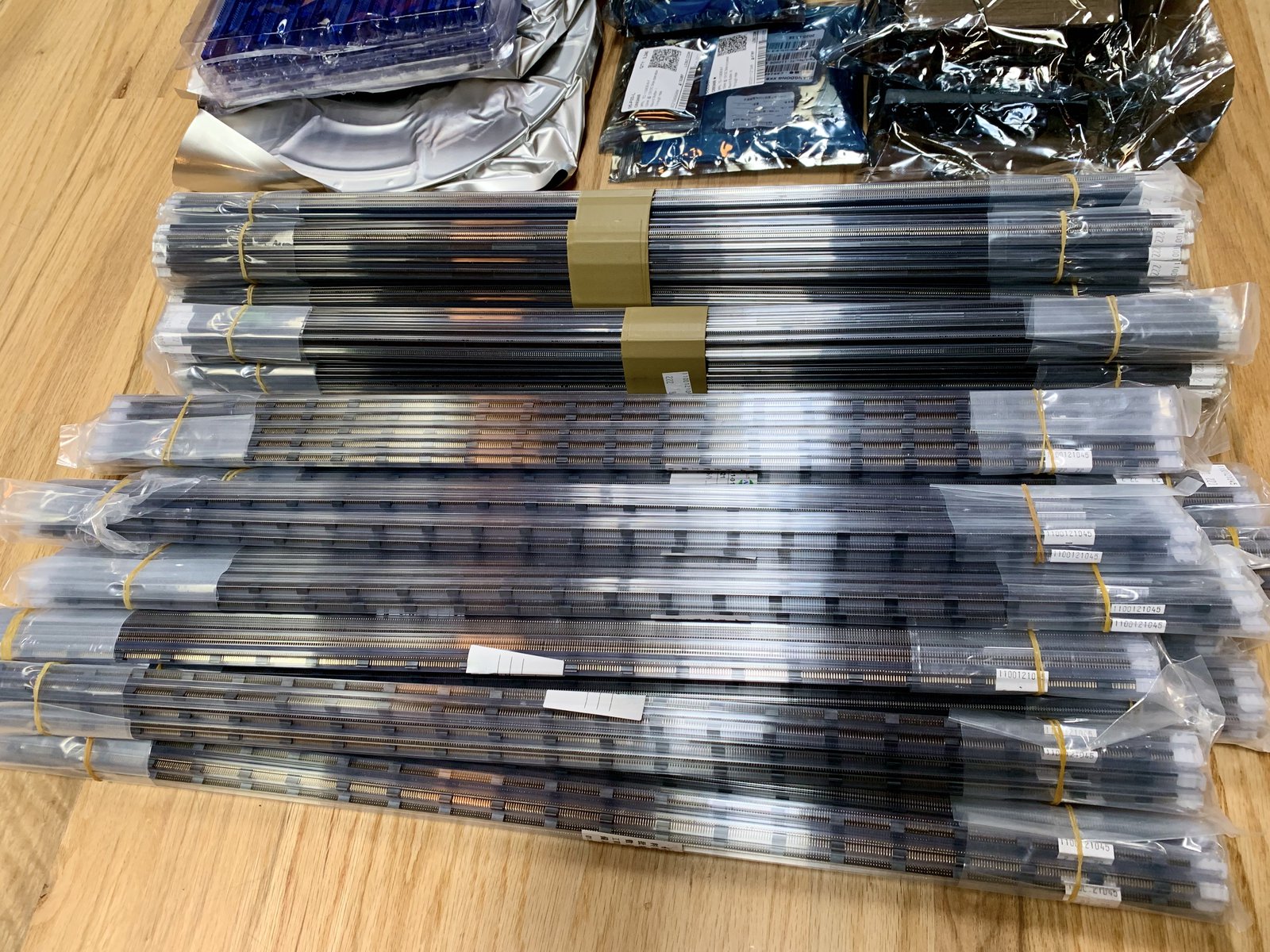 We got the keyed, 50-mil pitch, 24-pin LVDS connectors 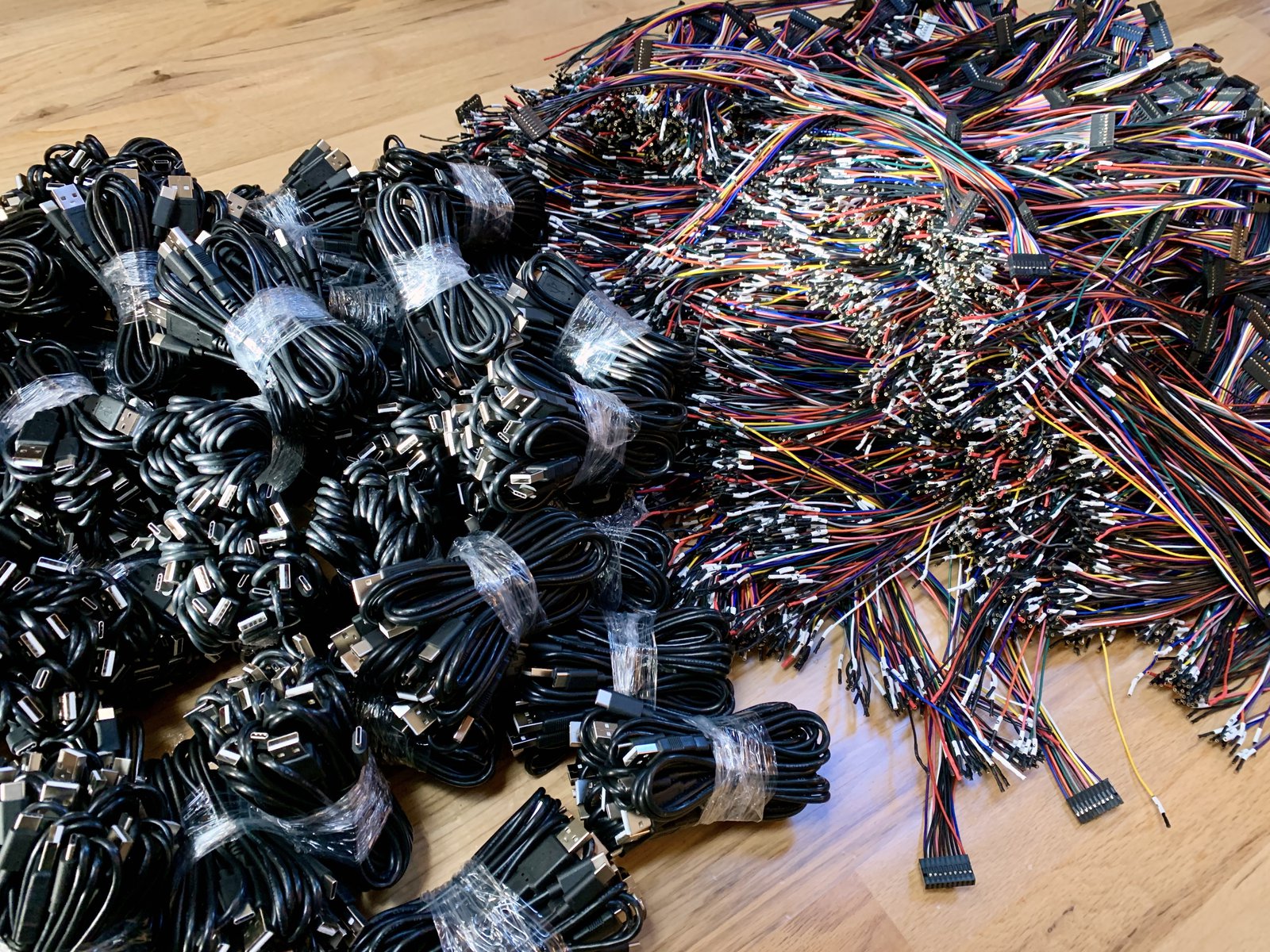 Another package containing about half of the ICs we still need is currently headed our way. We’ll post photos in our next update.

What We Are Doing

We are working hard to continue securing every possible BOM line we can get our hands on. We’ve placed orders with some alternative vendors that specialize in sourcing obsolete components and know how to "find" sold-out parts. They tend to be more expensive, but we hope they can get us enough quantity to assemble the Early Bird Glasgow units while we wait to receive our factory-direct orders.

As soon as we have all the parts to do the Early Bird production run, we’ll let you know!

What We Are Missing

The biggest showstopper for a full production run is the iCE40HX8k FPGA. (We have enough for the Early Birds. But, we are currently held up by other components.) Our direct-from-the-factory vendor is telling us that we’ll receive our iCE40s in September. If that turns out to be the last part we receive, we’ll be able to kick off production before the end of the year. Unfortunately… Our TI 3.3 V regulators currently have an estimated lead time of 52 weeks. Luckily, we think we have a new source for those, so hopefully we won’t have to wait for TI to get their factories sorted out.

This is the problem with electronics: it only takes one part to delay the whole project. We really hope we can get everything else before the iCE40s arrive, otherwise it will be some other part that holds up production.

We keep talking to vendors and sending out inquiries to get as many parts as we can from alternative sources. We are not ruling out part swaps or a PCB redesign to speed up the timeline, but that would be a tedious process with a lot of moving elements.

Overall, things are on the right path. We’ve been using this time to finalize the Glasgow aluminum case, which still has a few details that need to be sorted out. When that is done, we can finally order the production run of the cases.

When Is the Next Update?

We are sorry it took so long for this update to go out. It is surprisingly hard to write these updates when we are still in a state of uncertainty and don’t have solid commitments or dates that we can share. We are working hard in the background to get your Glasgow out to you. We have some parts in our possession now, and we will keep moving forward until we cross that finish line. It’s just turned out to be more of a marathon than we expected.

As always, thank you all for your support and your patience. I know you want your hardware as soon as possible. We want that too and are working to make it happen. :)

I am providing live Glasgow production updates every Tuesday at the beginning of each Twitch stream. If you want to ask me any questions, I’d be happy to answer them during the stream. :)

On Friday May 7th at 1pm Pacific Time, I’ll be a guest on the new Crowd Supply livestream with Helen Leigh. We’ll be talking about how supply-chain issues and the global chip shortage is affecting engineers, hackers, and makers right now. We’ll also cover how the situation is likely to develop over the coming months. Join us here.

Thanks again for your patience!