Production has Started, Slow but Steady...

We are making steady progress on multiple fronts of the project. 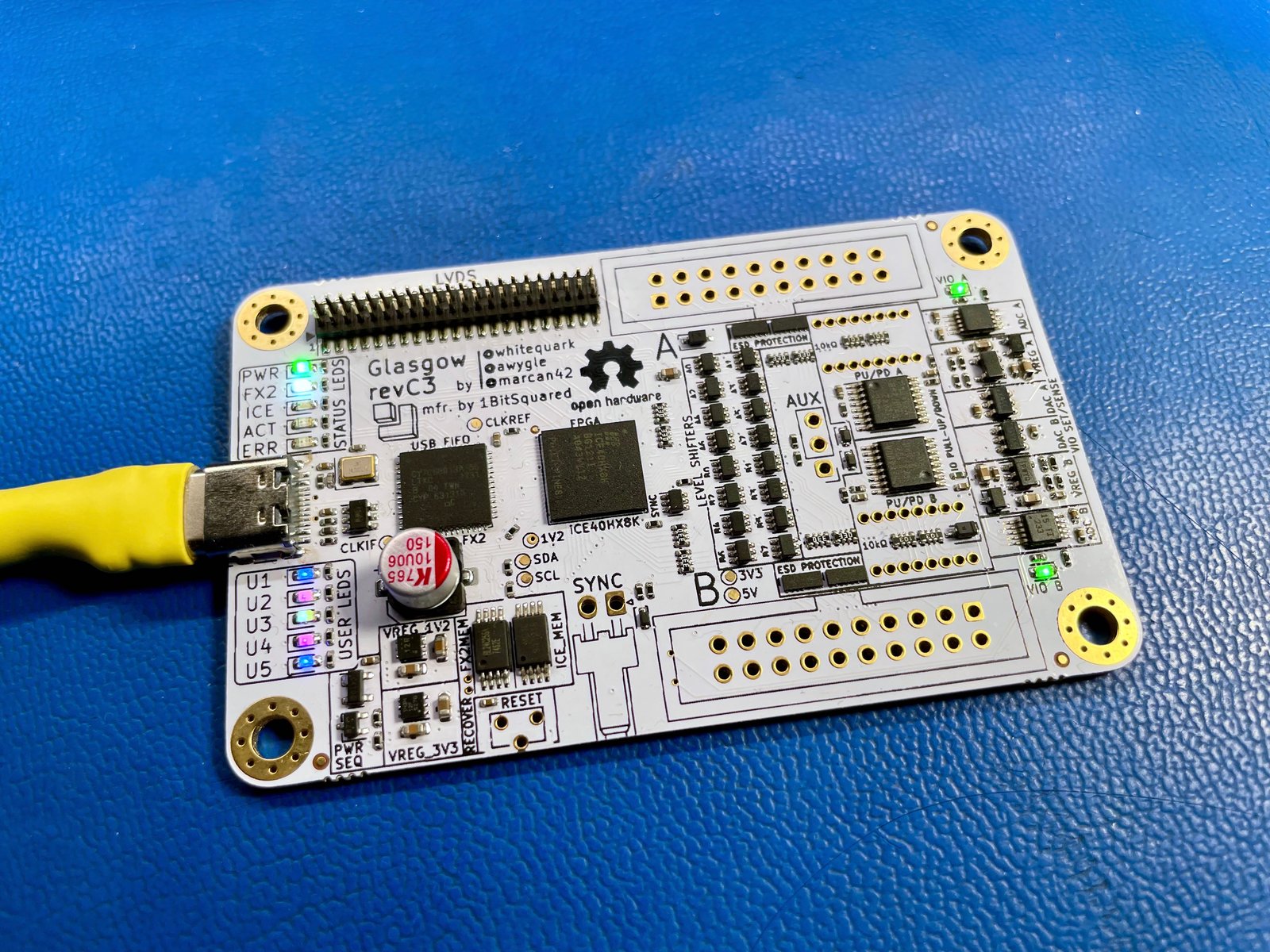 We started production after changing over our in-house PnP machine to Glasgow, and we are very slowly assembling boards. We’re testing the boards and setup to the best of our abilities at the moment. Our solder paste stenciling process is not as good as we need it to be, and the boards we make often need rework, which additionally slows down production.

We are working together with a local PCB assembly house in the US that might be able to sponsor some assembly to speed things up. We should get some more news regarding that in January.

We updated the Glasgow software to support the new revC3 hardware confirming that the hardware works. Additional work on the Glasgow software to simplify testing is needed, we know what needs to be done, but it will take extra effort and time. Catherine (@whitequark) is moving countries by the end of this year and will be able to spend more time on the project again.

We got a new version of the cases from the manufacturer. They look great, the improvements we made are very nice. Still, some changes need to be completed before we can say that we are happy. So, there will be one more round of prototype cases.

As we mentioned in our last update, all the parts are here. So we jumped in and did the necessary work to finalize the PCBs. They were ordered and delivered to us. 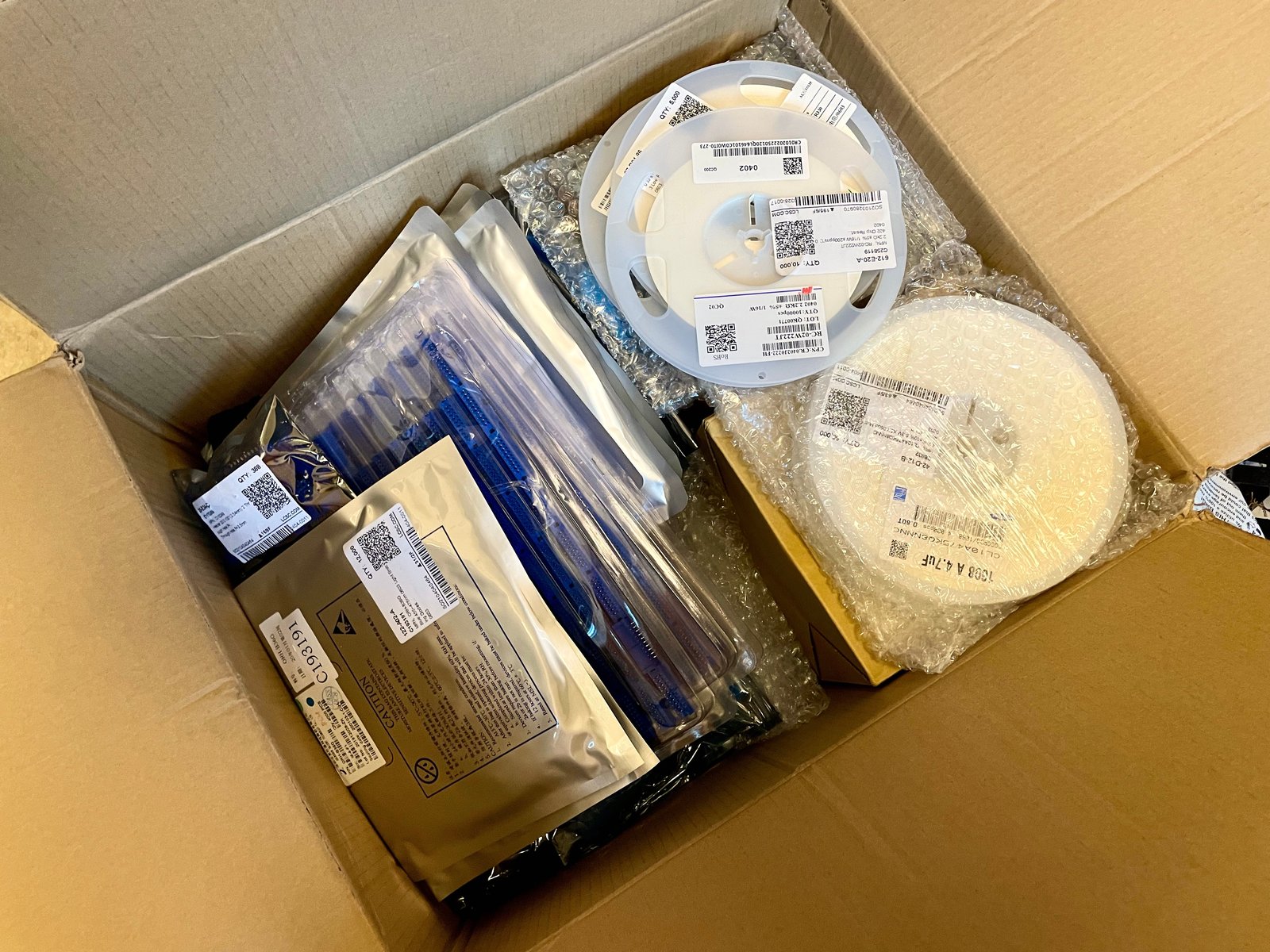 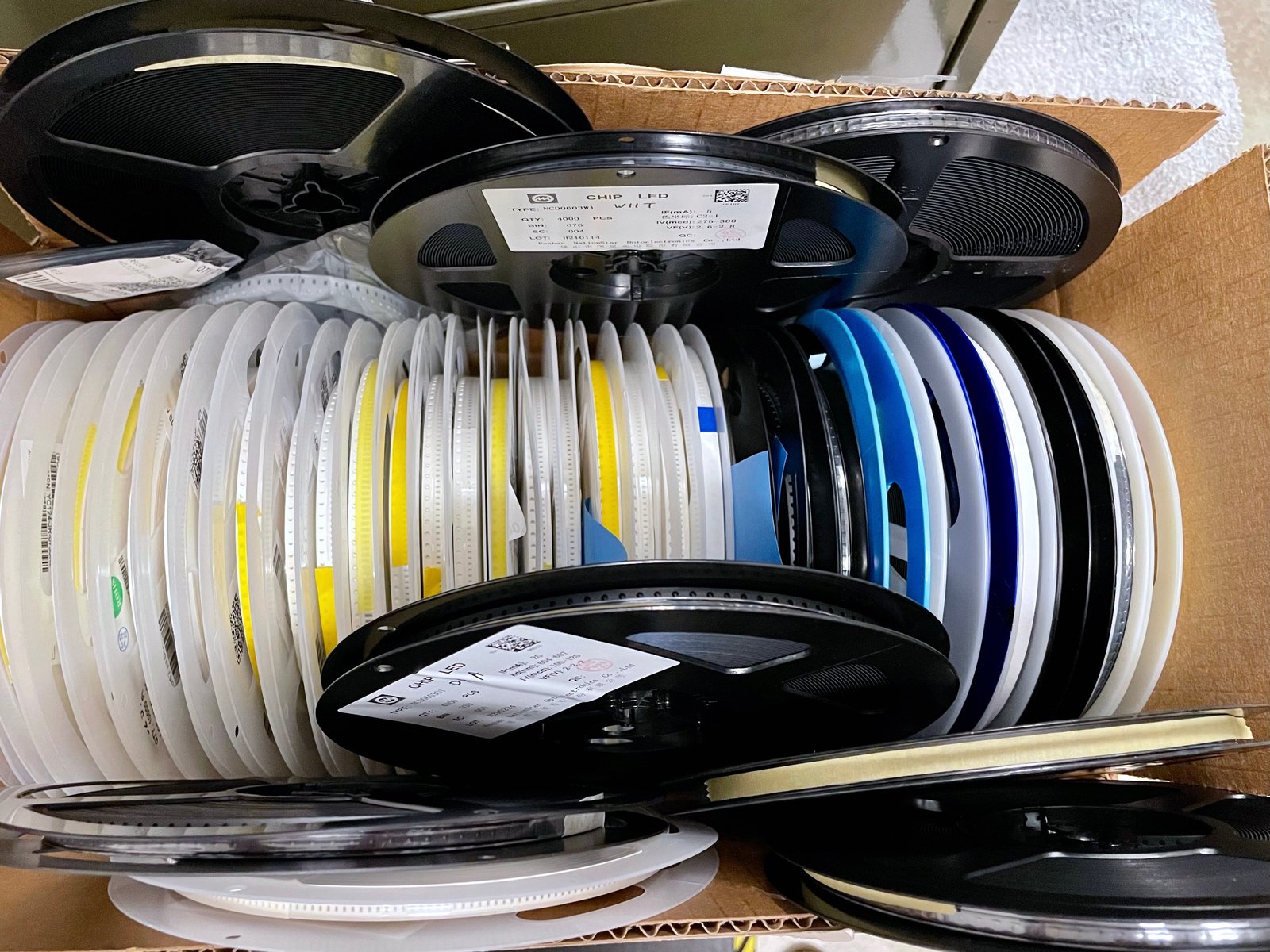 Boxes of Glasgow part reels, sorted out before setting up the PnP machine

We had to wait for our PnP machine to be freed up from all the other projects that we still had in the manufacturing pipeline, like for example: the new V2.3 Black Magic Probe, iCEBreakers, and associated Pmods. After that was finally done, we were able to program and set up the PnP machine. 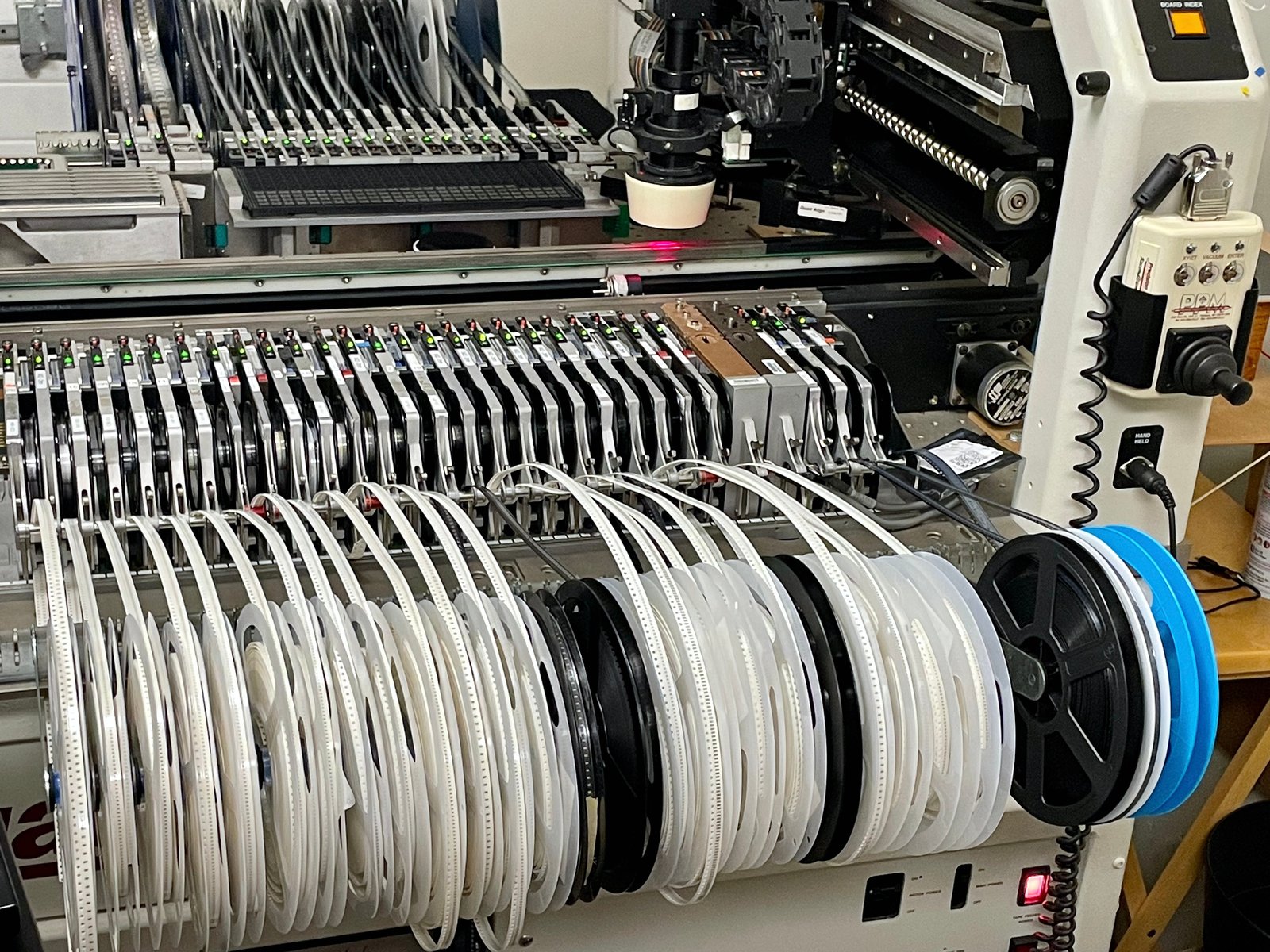 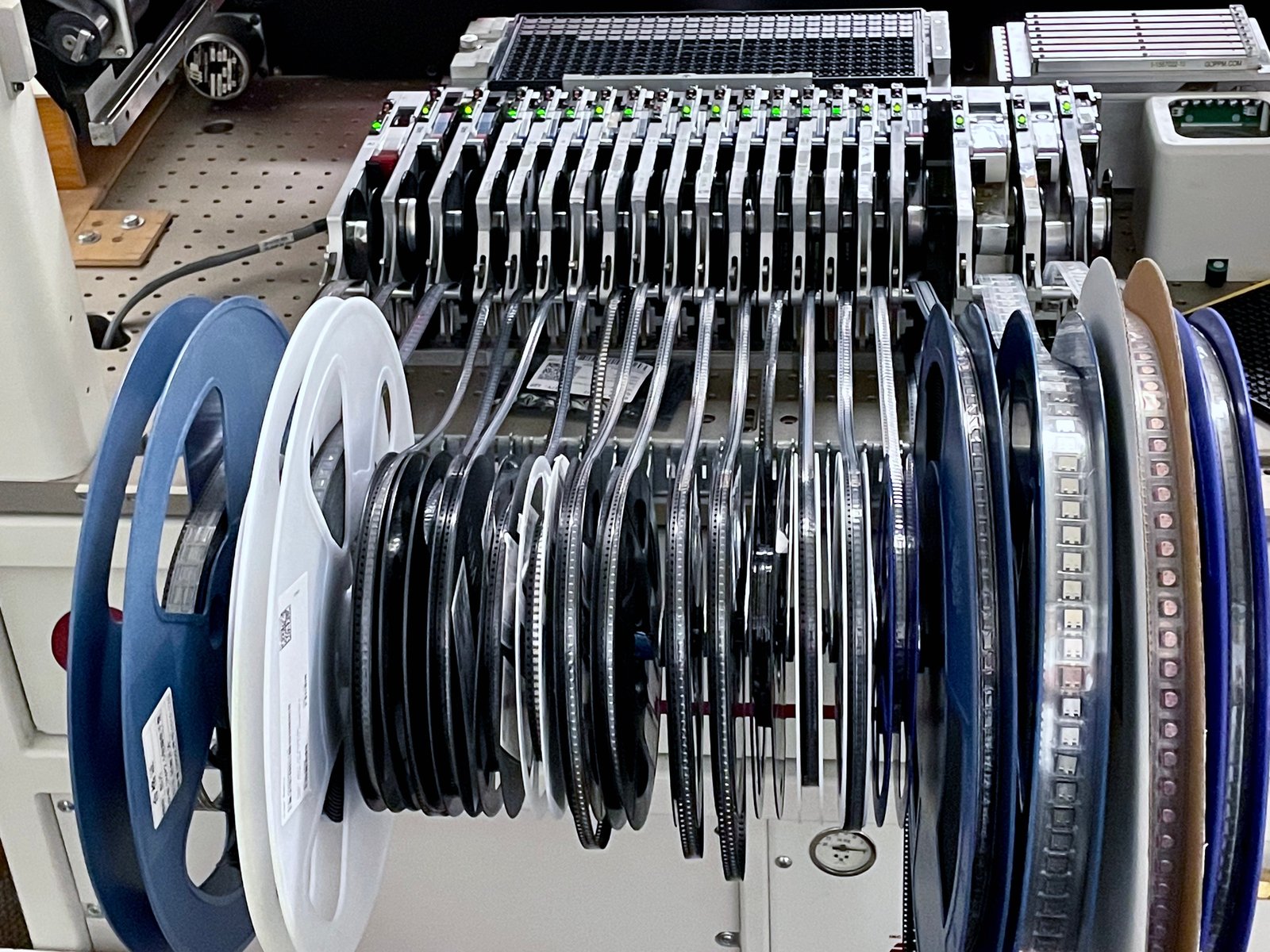 Our machine (the Quad 4000C) is now filled to its limit with reels. We are barely able to fit all the reels needed for the Glasgow on our machine. We are not even placing the large 44 pin SMD connector with the machine, but rather manually by hand, after the board is placed. It would have been pretty hard anyways, as they come in tubes, and vibratory tube feeders are quite unreliable and hard to use. 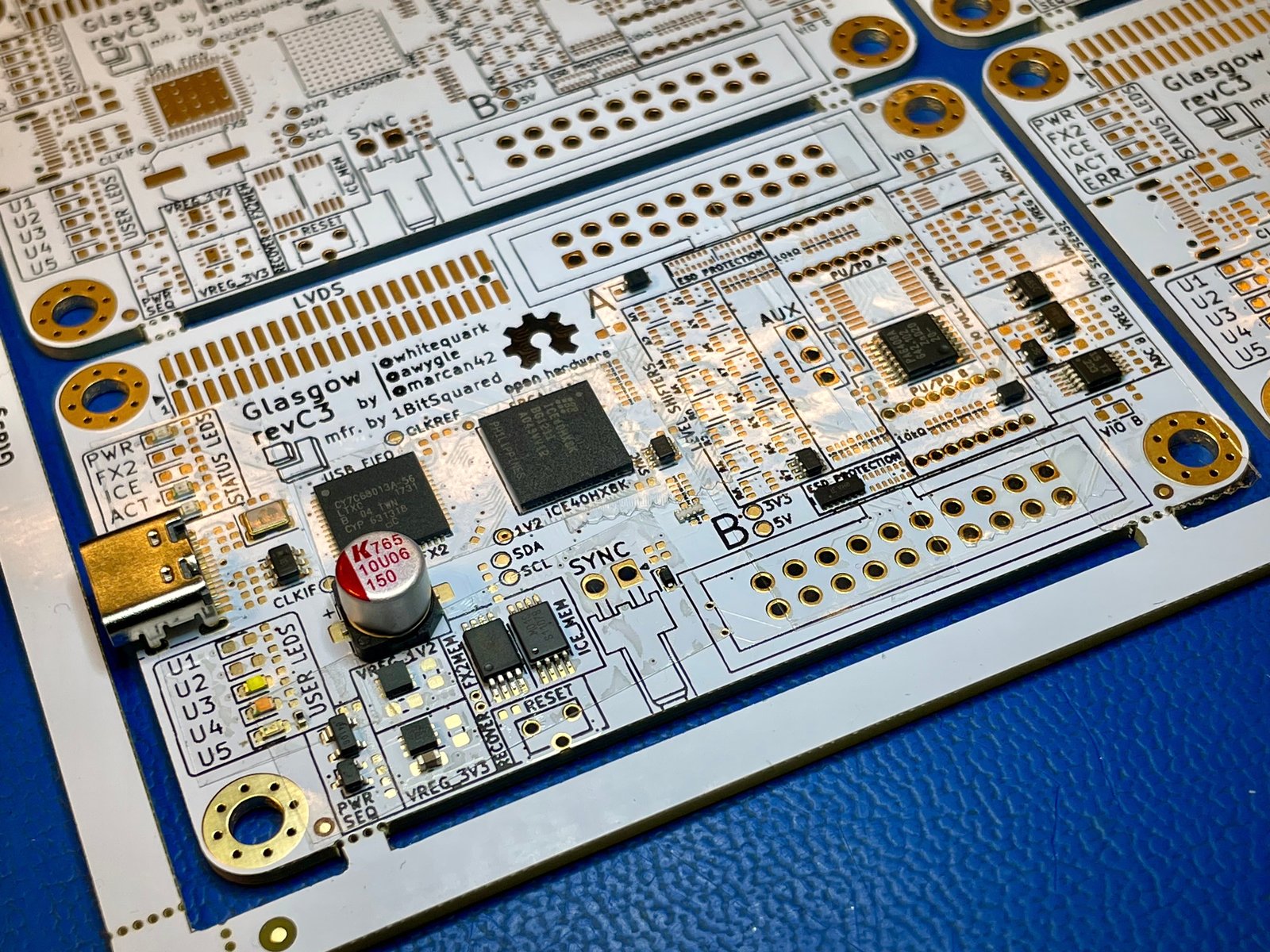 Part test placement, to make sure that the orientation of the parts is correct. This is done on a PCB with thin doublesided tape.

It took us almost two weeks to program, set up, configure and debug the assembly process of the Glasgow before we were able to put together our first test pieces. 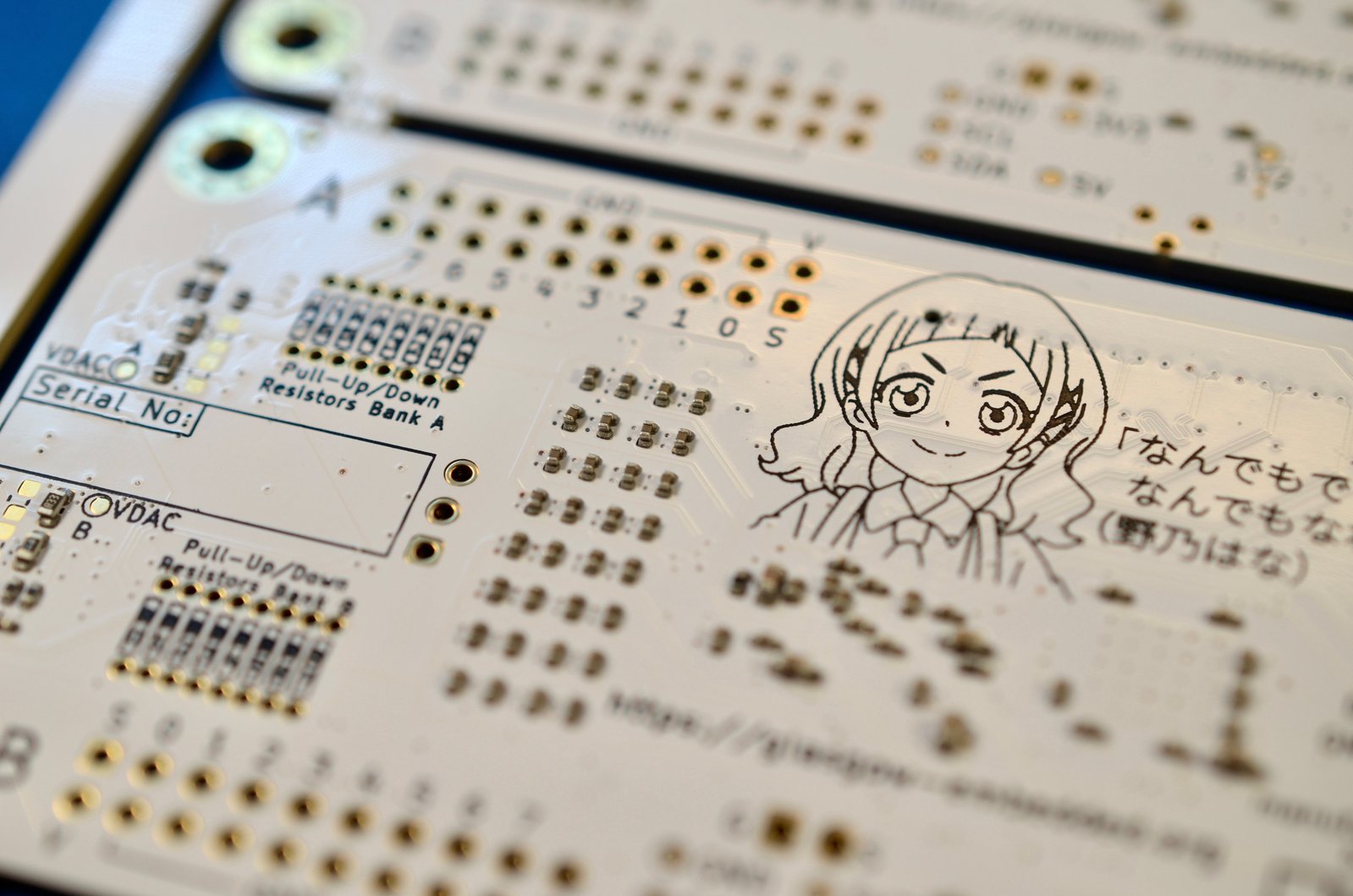 Back side of the Glasgow board. Parts placed into wet solder paste. 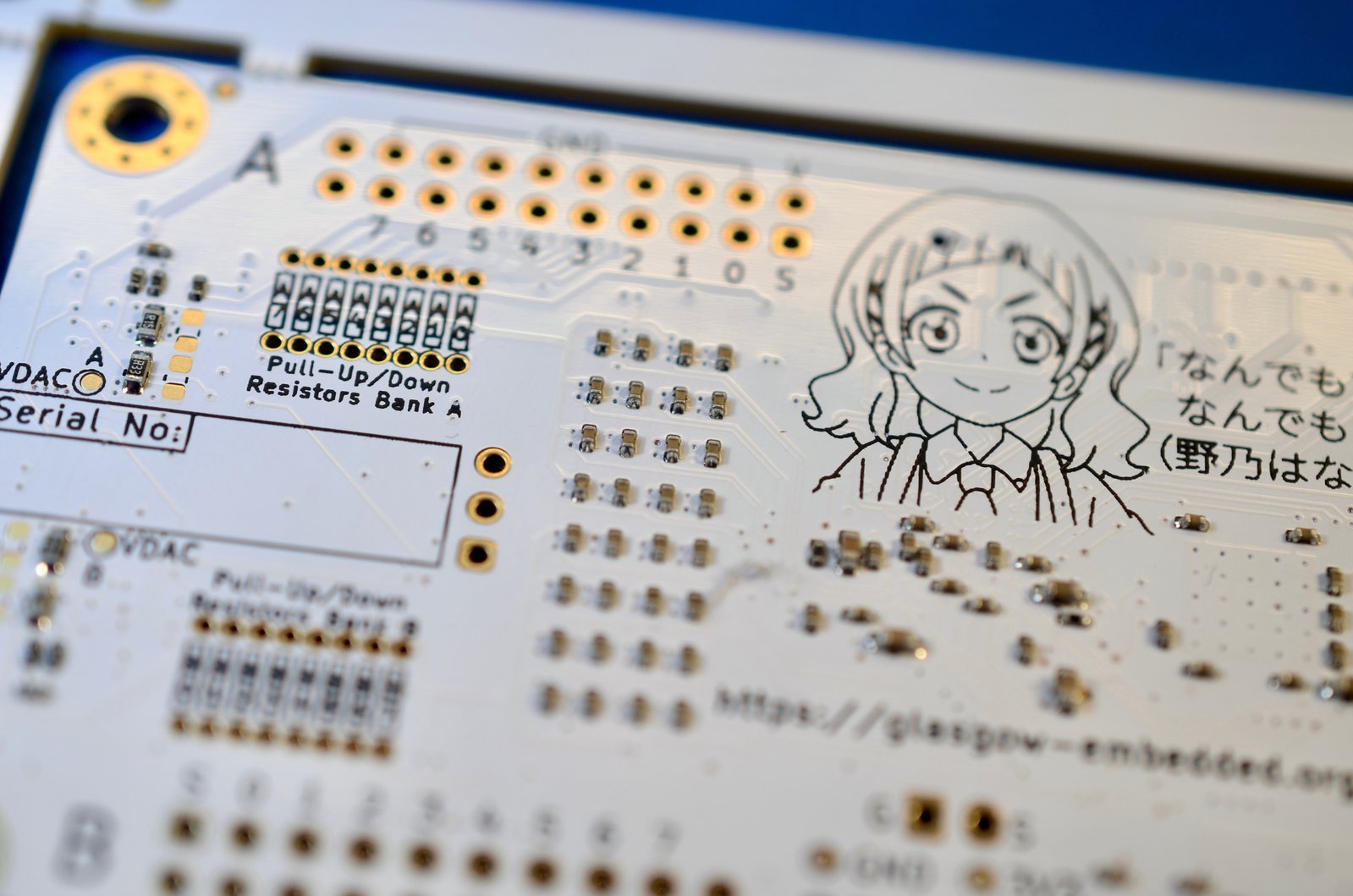 Back side of the Glasgow board after going through the reflow oven.

The assembly is not very fast, as the Quad can only place 2000 parts an hour, when all stars align, and it is being continuously fed with boards, without any stuck feeders and so on. Glasgow has 220 SMD part placements. This means that, in a best case scenario, we can assemble 9 Glasgow boards in an hour. In practice though, it is closer to 8 Glasgows an hour. And that is just the assembly, it does not include testing and potential rework of boards after reflow. 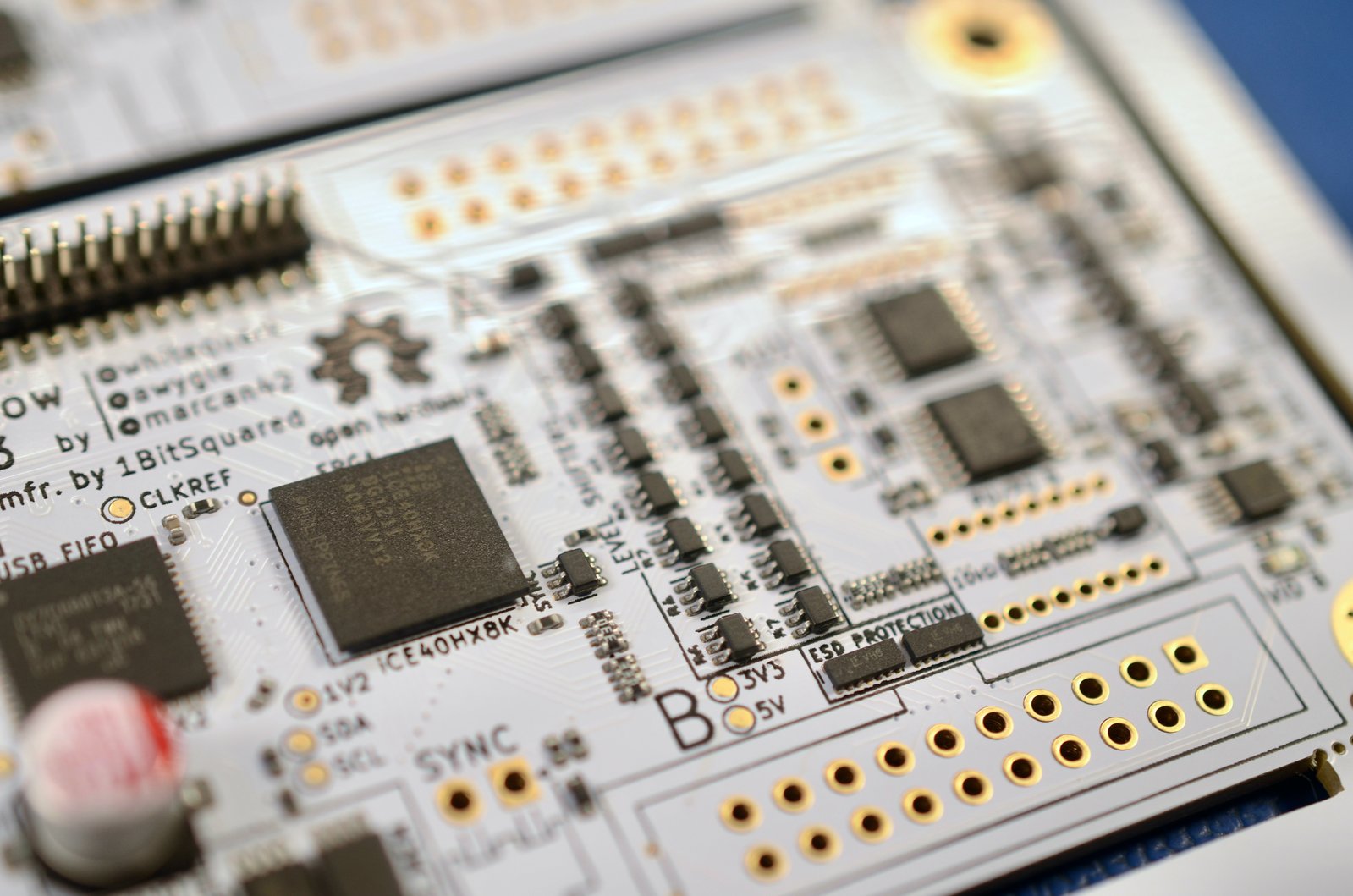 Front side of the Glasgow board. Parts placed into wet solder paste. 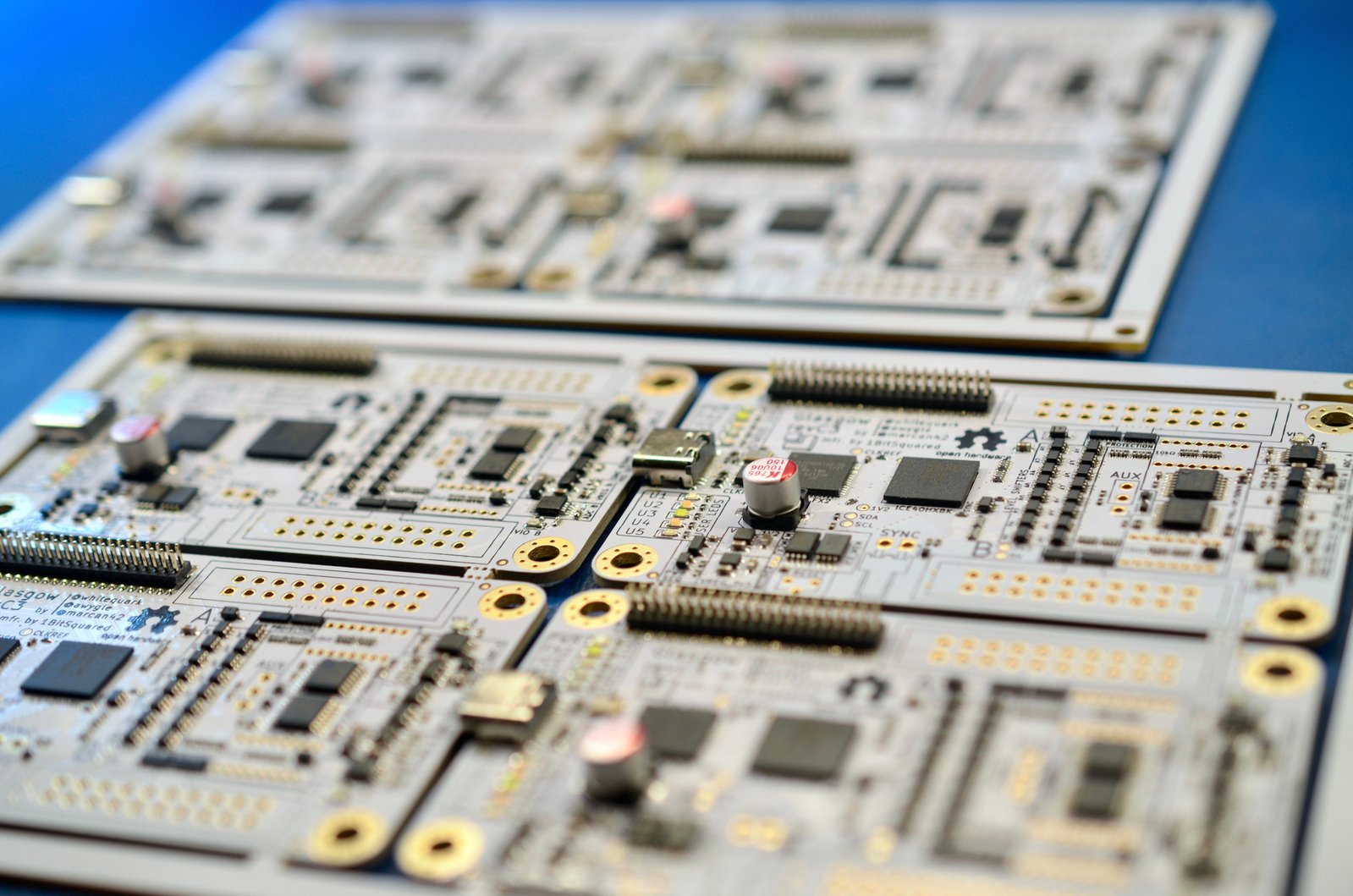 Front side of the Glasgow board panel after going through the reflow oven.

I hope this gives you a bit more insight why things are taking so long. To be honest, we knew that it will be hard to assemble Glasgow ourselves, this is why we did not plan to do it in the first place, but it is much slower than we expected.

We did reach out to assembly houses in the past to see if we can get help assembling the Glasgows. All previous attempts did not work out. This time around, we reached out to see if anyone would be interested in sponsoring the project in exchange for exposure. We think we found someone who is interested. It is not 100% set in stone yet, but it looks very promising. This will only be for the 200 early bird units. We should hopefully have good news in January.

Beyond the sponsorship, we decided that the right thing to do is to upgrade our assembly capabilities. It will not just help the Glasgow project, but also streamline and improve things in the future. A purchase like this is never quick or easy. So this will not solve our problems instantly, but we hope to get a new PnP machine early next year. The questions remain: how long it will take for us to bring it online, and how to get all the needed training and start assembling Glasgows on it. We will definitely keep you posted about that.

You can expect that Piotr will be posting some excited video and pictures of the new machines on his Mastodon account (@esden@chaos.social). So give him a follow there.

After assembling the first few units, we immediately went into board testing. We needed to do some work to add support for the new revC3 hardware to the Glasgow codebase. So far it seems that the hardware design as it is will work and does not need any changes. The test routine is not perfect yet, but we know what improvements are needed. We hope that over time the testing will become easier and faster.

We got the newest pre-production versions of the cases. As some of you noticed in our previous update, there was a mistake in the etched text. The bank B legend is up-side-down, also some of the text near the 1BitSquared logo looks strange, because it was not vectorized properly. We will fix all that in the next revision. Additionally, we are missing a cutout under the reset button, which is causing shorts when the case is screwed together. Also, the bottom part of the case is not totally rotationally symmetric, which makes it too easy to assemble the case wrong way around and potentially cause shorts. 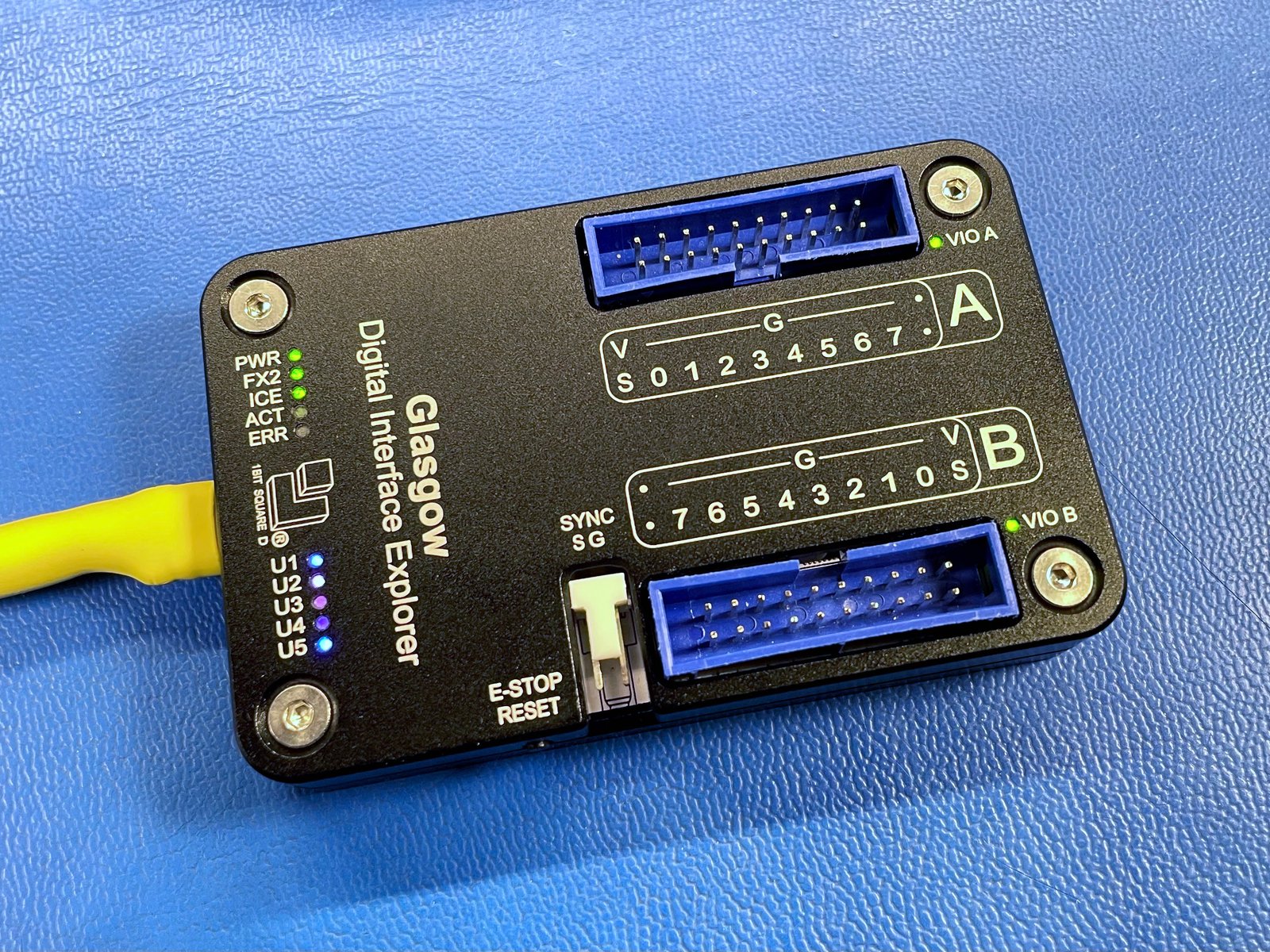 That said, the new discrete lightpipes are AMAZING! They have much larger angle of visibility, much less light bleed and are easier to see. Huge improvement over the acrylic lenses that we were considering before.

You might have noticed that work on the Glasgow software has been a bit less vigorous this year than previously. Catherine (@whitequark) has been severely impacted by the war and has not been able to spend a lot of time on Glasgow over the course of 2022, but is moving to a different country by the end of the year, and will be able to continue working on firmware and software then.

In the meantime, Piotr (@esden@chaos.social) is working on the things needed to bring up and test the new hardware.

We would like to take this opportunity for a quick reminder and update of the different project communication channels.

As always, you can jump onto the 1BitSquared Discord server and follow up on the project progress in the #glasgow and #glasgow-addon channels. The #glasgow channel can also be found on the libera.chat IRC network.

Piotr is actively posting Glasgow related content on his Mastodon @esden@chaos.social Account, and since fairly recently you can also find @1BitSquared@1bitsquared.com on Mastodon.

Piotr has not been streaming on twitch recently because of the overall workload, but he is planning to go back to it when time permits. Give him a follow to get a reminder when that happens again.

It is still hard to say when things will be finished. Production on our current PnP machine model is not as fast as we would like. With the help of the assembly sponsor, and then with our new PnP machine, things will definitely pick up the pace, and we will make faster progress. We should have a much better feel for the timeline in January. At the moment, things are slow but steady. We will continue assembling boards as fast as we can, and work on making sure that the Glasgow software is updated and able to quickly test boards when they start coming in at a higher speed. We are sticking to it, and we will deliver your Glasgows. We thank you all for your continuing patience and support.

See you in the next update!