The Defiant Bicycles Big Easy is a first of its kind: a hand-crafted, electric FAT bike that’s Made in the USA. The Defiant is the culmination of over two years of development and is the perfect choice for utility and recreation in virtually any setting. 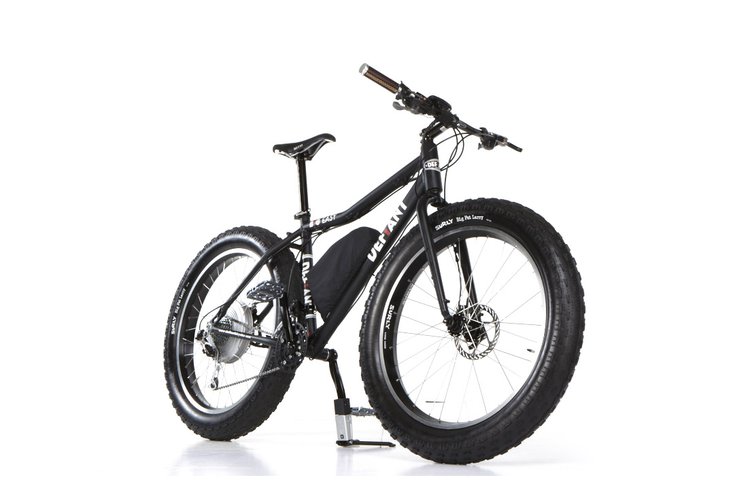 The inspiration for the Defiant came from company founder Kevin Spreng’s frustration at the lack of appropriate winter bikes. An attorney and committed bike commuter from the Twin Cities, Kevin wanted a bike that he could ride to work and for fun year round, through the harshest Minnesota winters. There simply wasn’t anything on the market capable of getting him through the snow and slush that made riding a challenge for as many as 6 months a year in Minnesota.

“I thought I’d give a fat tire snow bike a try,” Spreng explains. “It worked great on snow and ice, but it wasn’t fast enough for me. So, I put an electric motor on my snow bike. It was brilliant. Now I could go 15 to 20 miles per hour on snow-covered trails and roads while still getting a terrific workout. That’s really how Defiant Bicycles and the Big Easy model were born.” 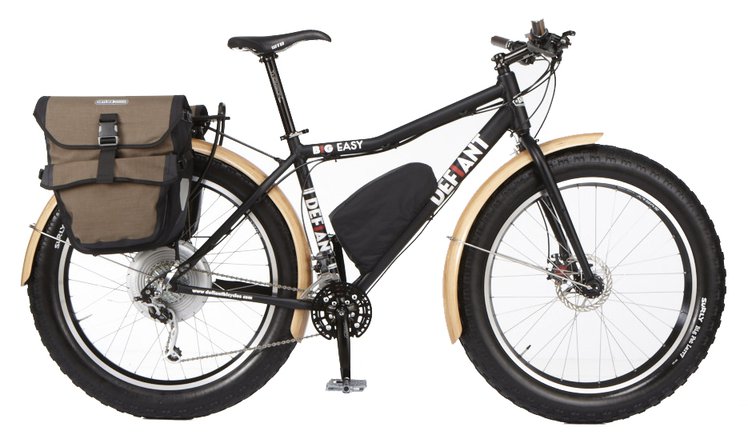 Looking to capitalize on the success of his prototype, Spreng teamed up with Jonathan Dombek and Greg Heinemann to develop Defiant, the company, and build its first model, the Defiant: an electric bike (e-bike) with the styling and craftsmanship one would expect to find in a top-dollar bike. Named, the Big Easy, Defiant’s first model has will fit and/or exceed the needs of several riding styles. As a FAT bike, it can go anywhere in as a commuter, snow, sand or rocky trail mountain-bike. It’s also perfect for the adventure-sportsman looking to get to a deer stand or previously unattainable location with a stealthily quiet mode of transportation. 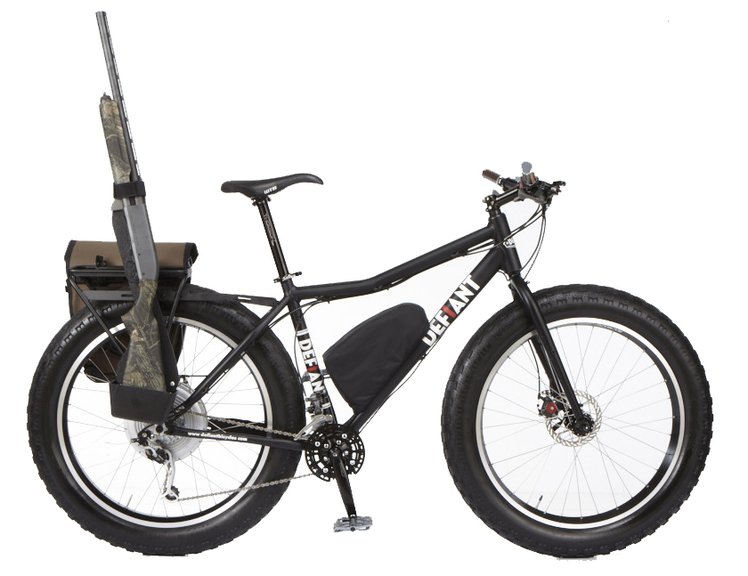 FAT bikes rule. Ask anyone who’s had a chance to ride one and you’ll see their eyes widen with glee. For the past five years, the FAT bike market has exploded in the United States and elsewhere. Enthusiasts have been blown away by FAT bikes’ ability to conquer terrain previously thought impassable by bike. Snow, rocky riverbeds, extreme off-camber sections, the steepest hills imaginable. A 4.7 in wide tire makes all of these scenarios rideable. FAT bikes were initially used on trails under many feet of snow. People were naturally curious, “I wonder how this bike would ride here, and here, and here?” Since their inception, FAT bikes have become the bike of choice for an immense cult of riders. Some people have gone as far as selling every other bike they own and opting to ride their FAT bike exclusively.

"You mean those tires won’t slow me down?"

While the FAT bike tires may appear slow and cumbersome, nothing could be further from reality. Though they are certainly wider, and larger, than traditional 26” tires, FAT bike tires float over most surfaces and keep the bike’s steering lively and assuring. Depending on rider weight, FAT Tires can be inflated to pressures as low as 7pounds per square inch. Lower PSI is how you unlock the performance advantage of FAT tires. This larger tire coupled with lower-than-normal PSI inflation also serves a dual purpose: natural suspension. Over bumps, rocks, You’ll feel like you’re riding a cushy full-suspension bike, only it’s faster and more responsive. FAT tires allow the rider to sling shot themselves through the nastiest bumps in terrain. They also ride fantastically on road. You’ll feel like you’re cornering on a motorcycle as you lean into turns on a descent at high-speed.

As a result, nowadays, FAT bikes are so much more than snow bikes. From winter riding, to desert sand dune sessions, to long-distance adventure touring, not to mention plain old-fashioned trail riding on your favorite patch of single-track, FAT bikes are showing up everywhere. FAT bikes are currently the fastest growing segment in the bicycling industry. Companies can’t make enough of them to keep in stock. That’s why we’re so excited about this opportunity. We wanted our first bike to make a splash, and what better way to do it than with the introduction of a Made in the USA electric FAT Bike?

As a means of making our Defiant more versatile than ever, we equipped it with a 500 watt electric motor. This allows you to carry more with you on a long commute, adventurous tour, or hunting expedition in all conditions. The electric assist also means that your bike has become more utilitarian than ever. Single-occupant trips by car become less necessary, which will save you money in the long run all the while allowing you to burn calories you wouldn’t if you made small trips by car.

Market Opportunity in the United States

With a range of 20+ miles, the Big Easy is positioned to put e-bikes on the map in the US where approximately 100,000 were sold in 2012. This figure lags behind sales in Europe where 1.1 million e-bikes were sold last year and in China, where approximately 27Million were sold in the same period! The Big Easy hits the fastest growing segments of the bicycle market – the electric category and fat tire category. With trends of electric car sales continuing to grow in the US as well as the use of bicycles for commuting in general, Defiant is positioned to take advantage of these macro trends with its introductory model – the Big Easy.

Unlike motorcycles or scooters, the Big Easy doesn’t uses any fossil-fuels, is easily recharged at a standard electric outlet and is light enough to be rolled into the garage or shed or carried up stairs to an apartment or dorm room. Totally green. Completely efficient with a maximum speed of 20 miles per hour, it provides a comfortable commute, an edgy, all-conditions sporting experience and a daily workout for its user on a bike design totally unique to the category. 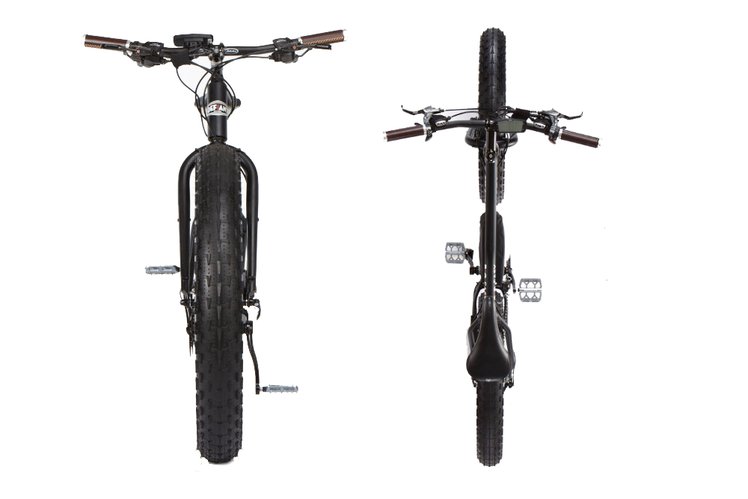 Where is the Big Easy Manufactured?

“Defiant is a state of being – a way of life. It is about breaking from the past, blazing a new trail, and redefining boundaries. Be active, get involved, lead the way – status quo be damned. Be Defiant!”

You Should Get On Board with Defiant Cycles

Defiant Bicycles Big Easy crosses the boundaries of utilitarian purpose and the simple joy of riding as fast as 20 miles per hour through impossible elements like drifted snow or a heavily sanded beach with all of the convenience and greenness of a bike combined with the unbridled joy of a Vespa.

Defy convention. Defy polluters. And dramatically, definitively defy the elements with a revolutionary electric bicycle that gets you where you need to go – reliably, effortlessly and with zero emission. Come Hell or high snowfall. Combining off-road durability with an urbane sensibility, the Defiant Big Easy flies over potholes and drain grates and plows through snow and sand at speeds up to 20MPH. The motor uses no fuel, emits no pollution and costs just pennies to recharge.

Whether you’re commuting to work or communing with nature, Defiant’s Big Easy not only does the job, it defies anyone or anything to try and stop you!

In addition to a fully-built Big Easy, we’re giving you the opportunity to help launch our brand by backing the following pledge levels. From general donations, to t-shirts, to a full-carbon FAT bike fork (yeah, that’s right, FULL CARBON), there’s certainly something here that’s bound to interest you. Please make our Big Easy a success by backing our project and spreading the word. 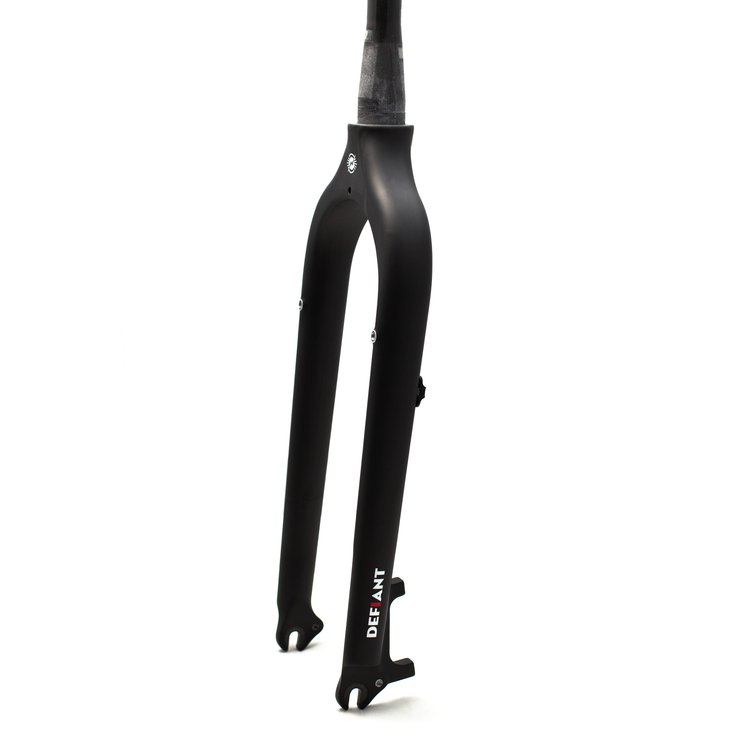 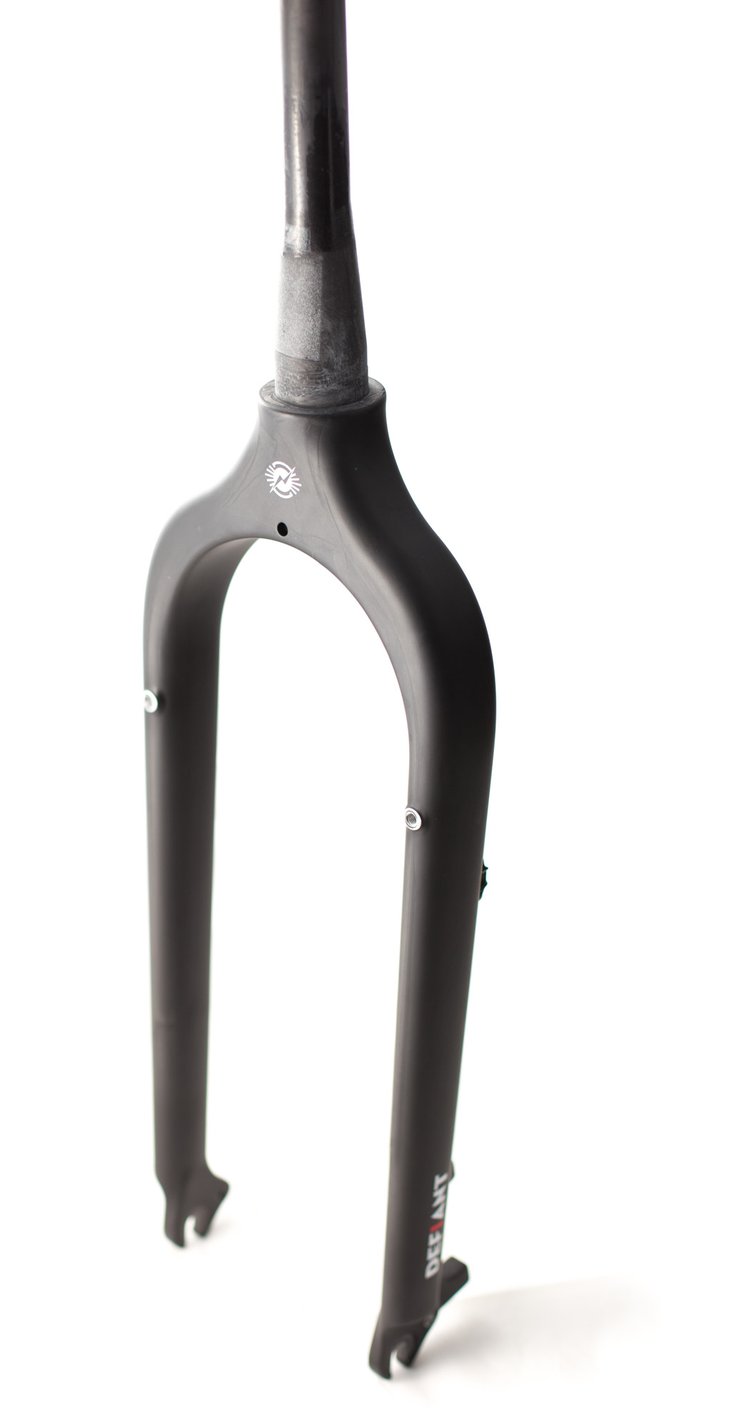 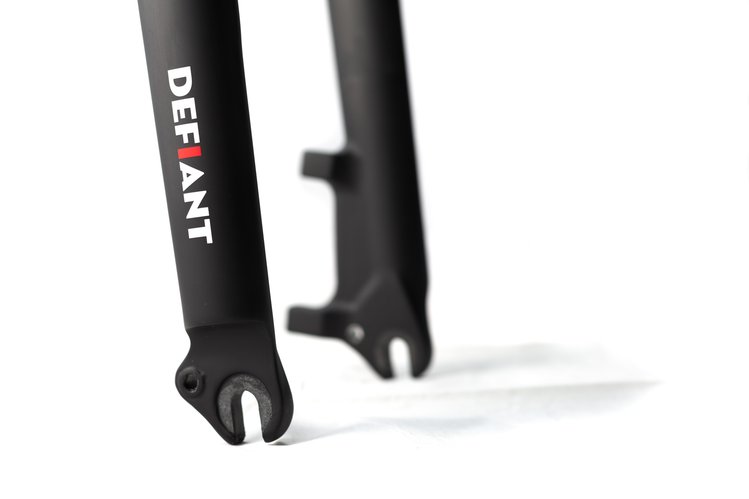 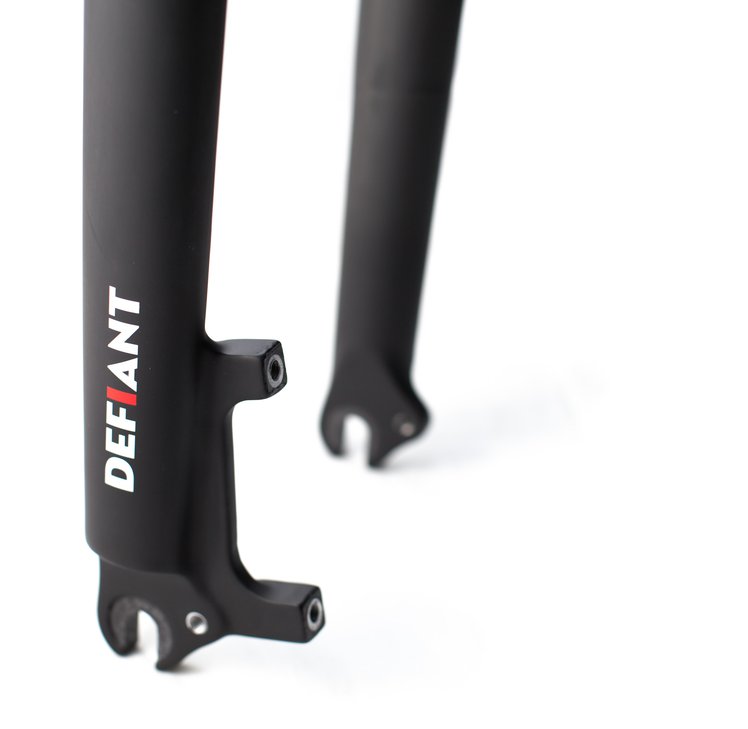 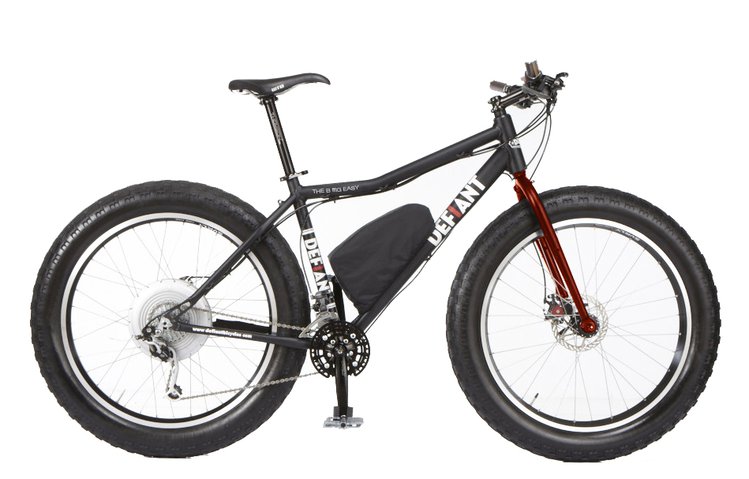 Defiant has produced its prototype and two new versions of the Big Easy. All suppliers and vendors have been identified and contracted with. 30 frames have been manufactured and inventoried. All of these frames are 19 in frames with a 61cm top tube. Based on the success of the Big Easy on Crowd Supply, we plan to add more frame size options. The released product has been developed and built in the US.

Defiant Bicycles LLC was founded in 2011 by Jonathan Dombek, Kevin Spreng and Greg Heinemann. All are avid cyclists and not only committed to the sport of cycling but also to green and responsible practices and the idea of creating a new category of cool, electric all conditions fat tire bikes. Defiant is based in St. Paul, MN, where Spreng and Heinemann live and Dombek resides in Carnation, WA. It represents the collaboration of seasoned business people, passionate about bicycles and obsessed with quality. Together, we have a long and successful history in business with a focus on Marketing, Sales, Engineering and Entrepreneurship. All have created multiple companies that they have successfully led. Defiant is a labor of love and rising to the challenge of creating a cool, functional means to exercise, commute and simply live a life Defiant – Status quo be damned!

Be Defiant. Break from the pack, blaze a new trail, redefine your boundaries. Be active, get involved, lead the way. Status quo be damned.