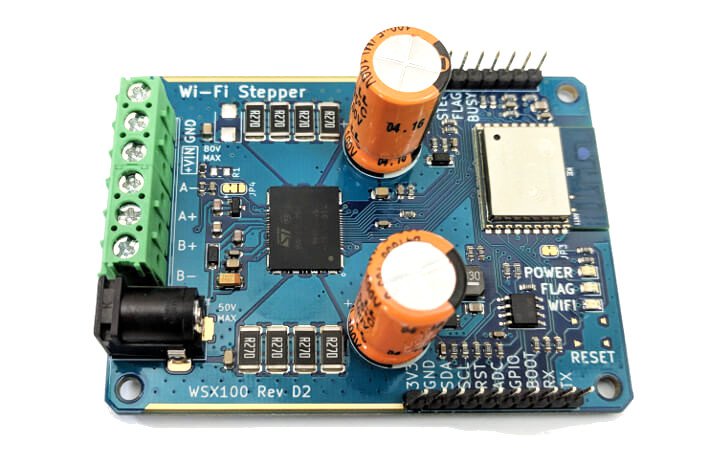 Hello everybody! We’re pleased to announce that the Wi-Fi Stepper board design is finally complete. We’re really excited about it and we hope you will be too. Over the last few weeks, since the campaign ended, we’ve been hard at work finishing the design, developing the codebase, and sourcing the components. Version 1.0 of the software will include some extra features that people have been asking about:

As we ready for production, we’re facing challenges and overcoming hurdles that we haven’t experienced before.

Sourcing the components (notably the powerSTEP01) has been a real issue. The chips have been consistently out of stock for the last few months. We were lucky enough to snap up 50 for our prototypes in January. For production, however 50 just won’t cut it. We put in an order for a tray of powerSTEP01 IC’s with STMicroelectronics towards the end of December last year. The best updated information puts the delivery April 9th. Unfortunately, that pushes the estimated April 20 delivery date to our backers by a few weeks. As soon as we can pin down a precise date, we will post an update and let everyone know. Thank you for your patience!

Now for some good news, we’ve chosen to go with PCBWay for board assembly. They fabricated the last set of prototype PCB’s and the quality looks good. We’re assembling 20 of them in-house for extensive/destructive testing. If we manage to get video of a good board pop, we’ll post it.

Last but not least, we would like to say thank you to those people that have reached out with questions, comments, and support. We really appreciate everyone’s feedback and the Wi-Fi Stepper is a much better product because of it! Special thanks to Ted Larson for helping with the final design and Pascal Broca for assembling the new boards into the wee early hours.

Good Robotics develops hardware and embedded software for robotics and control applications. Our focus is on adapting professional-level platforms and techniques for a wider range of users such as makers/hobbiests. We have experts in electrical engineering, embedded systems, mechanical engineering, and sensor fusion/controls.