PID Controller for the Line Bug

W00t! Snekboard is 150% funded! Thanks again to all of our supporters; you made this possible. We’ve been busy getting ready to start manufacturing boards, cables, and sensors, but we also found some time to develop a PID controller for the Line Bug we introduced a couple weeks back. We learned a lot in the process, and this update walks you through it.

Lesson 2 shows you how to build a simple “Line Bug”, which wanders around a table following the edge of a black (or white) line. A few years ago, while we were still using C++ on Arduinos, one of the teaching assistants for the robotics class wanted to try applying more advanced robotics control techniques and see how much better it could work.

I’d heard of a control mechanism called proportional-integral-derivative (PID) and suggested to the student that they could go figure that out and give it a try. A few weeks went by and the student came to class with a bunch of C++ code that looked plausible, and we spent an hour fixing a few bugs and got it mostly working. The student spent another couple of weeks of tweaking the parameters and the line bug was zipping around our course quite smoothly.

While browsing for sensors to include in the Snekboard Sensor Kit, I found an 8-element reflectance sensor array from Pololu. I wondered if this might make an even better line bug sensor as it would provide a wider field of vision and let us know ‘how far’ away the edge line was from the centerline of the robot.

I wired the sensors up so that they were connected across Snekboard from right to left. Then I hot-glued the sensor PCB to the end of a 4x2 LEGO brick and stuck that on the front of the robot. 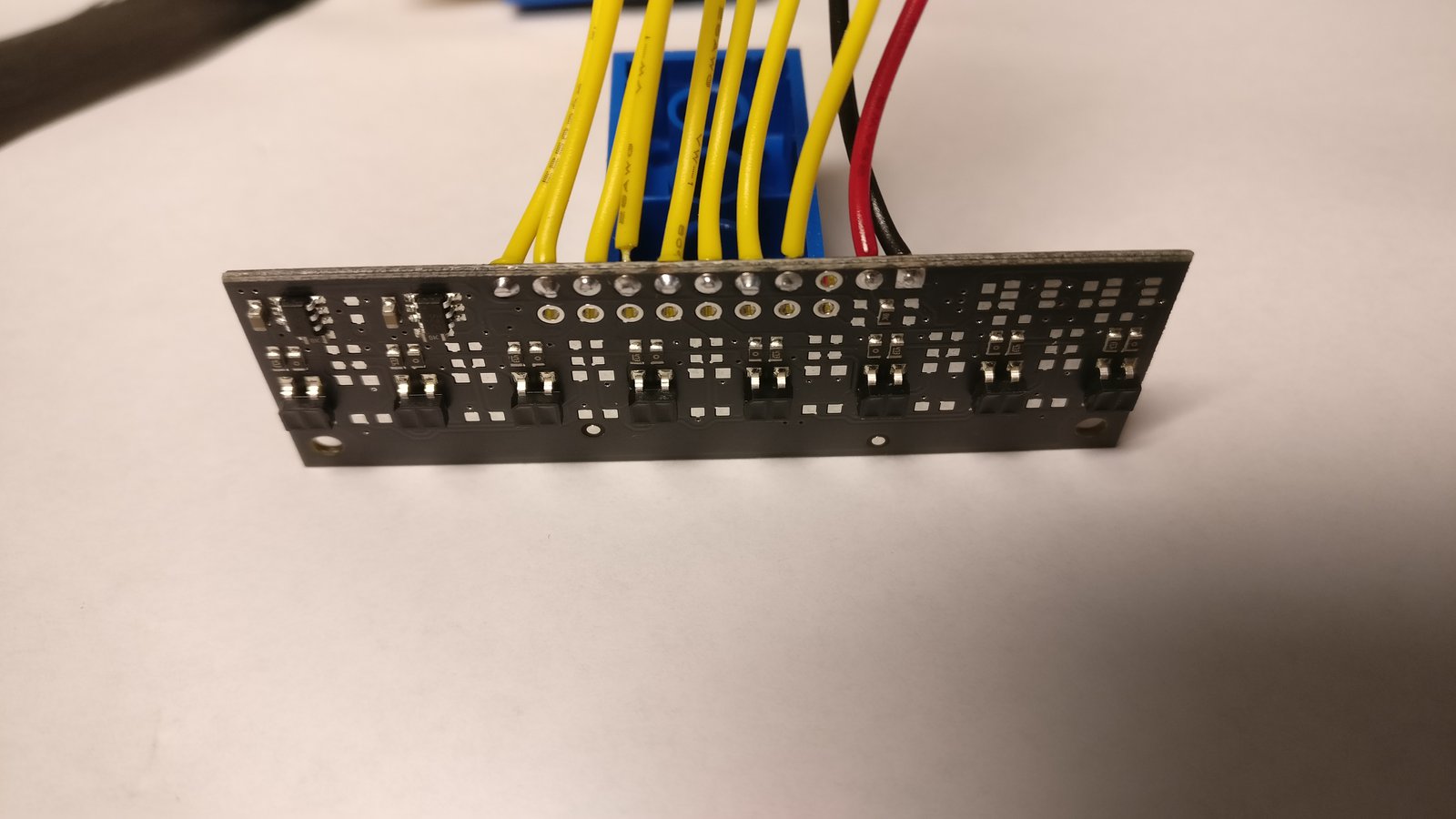 Black is Not Always Black Enough

The Pololu Sensor Array uses IR light, which means we’re looking for a two materials, one of which reflects IR light well and one which absorbs it. White paper is a fine reflector, but when I tried a black marker, that turned out to reflect IR about the same as the paper.

So I headed off to the local craft store and bought a selection of black paints, including poster, tempera and acrylic. Painting blobs of each on paper showed that the acrylic was the best absorber, producing a value of 0.77 while the white paper was 0.06. The poster paint only read 0.53, while the tempera was 0.70.

I took the black acrylic paint and created a nice track for my line bug on a big piece of white paper taped to the table. 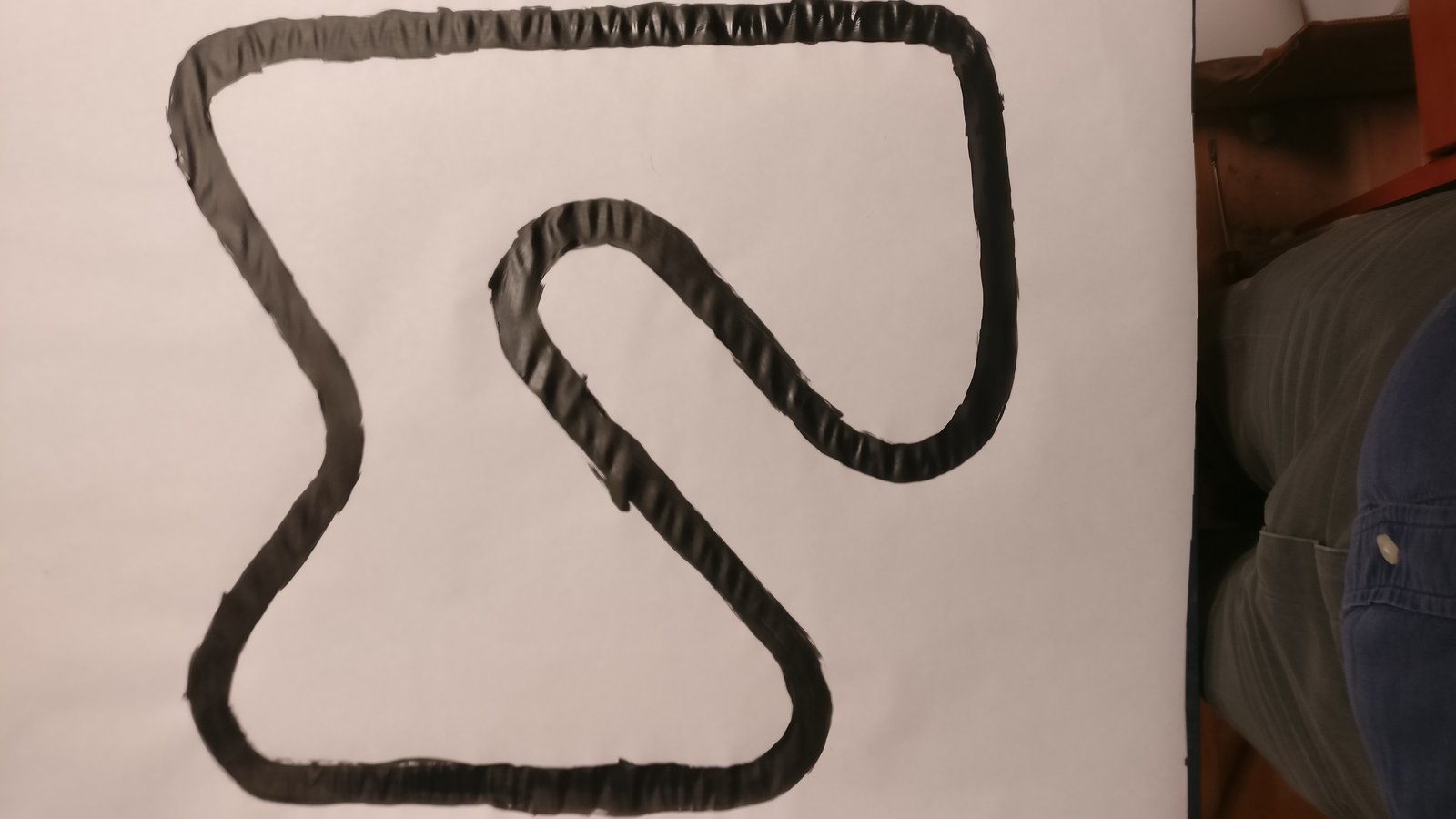 Just for comparison, I took our classic “bang-bang” line bug code and implemented it on this robot:

That means we want an error value which is zero when the middle of the line bug is over the edge of the black line. When it’s on one side of the line, we want positive values and when on the other side, we want negative values. The further from center, the larger the magnitude of the error term should be.

Because the line is not as wide as the sensor array, I needed to look for the ‘first’ edge and ignore any others. So I scan the sensors and stop when the first one is over the line:

This returns a value from -1 to 1, depending on which sensor first sees black. It’s not very smooth though, as it doesn’t try to figure out how far from the center of the sensor the edge appears. We can improve this by using the amount of light reflected into the first sensor that sees the line. That’s just black - v. Let’s add that into the result so that we get a smoother answer:

As the name implies, a proportional-integral-derivative controller uses three values:

Given these three values, the process value of the PID controller is computed using:

Kp, Ki and Kd are three magic constants which are provided to the algorithm by the programmer. Figuring out what these values should be is the hard part of the problem.

To make sure everything was working, I set Kp to 1, Ki and Kd to 0. This is the simplest case; setting the motor speeds directly proportional to the error value. To avoid chasing the robot across the table, I scaled the speeds back to 1/4 of maximum and set it off:

I then set the speed back to the maximum and spend about half an hour messing with the PID constants. My technique was something like:

With a successful 8-sensor robot, I wondered if I could use just a single sensor and still make it work. All that required was to change the measure function to read from a single sensor:

Again, I started by running the robot at 1/4 speed just to see how things worked, setting Kp to 1, Ki and Kd to 0.

This worked, but attempts to up the speed resulted in failure. Because there’s just one sensor, when the robot overshoots far enough to get the sensor on the other side of the line, it gets very confused, thinking that it is too far right. That means the controller needs to react quite quickly when the value changes, which can cause a bit of oscillation.

I spent a while tweaking the PID values to find a balance between smooth operation and keeping on track, ending with these: