Hello! This is Luke, Hexoshi’s pixel artist, with an update on the state of Milestone 1. You may have noticed an apparent slowdown in development this last month or so, and that has been the case, unfortunately — I have been holding things up with a lack of progress on animations and tiles. Julie is at the point where she cannot make more headway on code until I catch up on the graphical side, so she and you are in the same boat waiting on me. I apologize for that, and I am working to get back on track moving forward. But to get to the actual update for a moment, below is an overview of what I have been drawing in the last few weeks.

Julie mentioned in the last update that I had been doing some work on the first area of the game, Iridia; this is where I am with that right now: 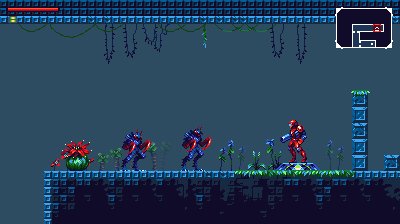 Though this is not one of the goals of Milestone 1 and I am working on it in my own time, I thought fleshing out Iridia right now was worth doing in the long run so that it does not look out of place as the next milestones get underway. I wanted to make sure this area had a unique feel. Julie’s vision was of vibrant, hostile alien flora and fauna, so I looked around a local greenhouse in search of interesting plants, which inspired some of the elements in this mockup. (If you ever feel like indulging your inner botanist, feel free to send any bizarre plants you know of my way, and you might see a pixel art form in Iridia at some point.)

As for advancement toward the actual goals of Milestone 1, since the last update I have been working on two different enemies. I completed the base frame and attack animation for the mantanoids’ scorpion-like animal sidekick, but the rest of its animations are temporarily on the back burner while I figure out how to make bugs walk. ​

​ I also worked out the visual concept for the mantanoids based on Julie’s descriptions and got started on two attack variations. The idea is that mantanoids have blades folded along the inside of their forearms; Julie used the analogy of switchblades in describing them, which I thought was pretty cool. ​

With that said, I want to make sure to emphasize that I am sorry for not making more progress as of late. I have been tending to a variety of academic and personal situations; the month of June is generally pretty hectic for me. But more to the point, I have not placed enough priority on Hexoshi. Again, I apologize for that. My hope is to correct course and make significant progress on Milestone 1 in the weeks to come. Many thanks for your continued patience and support.