Today we have reached over 50% of our funding goal, which is great!! We would like to say a big thank you to all of you out there supporting the Paperino ePaper project! If you know anyone who might be interested in seeing Paperino funded, please share our campaign! Now the time to spread the word with only nine days left!!

The MKRFOX1200 is a newly released board of the Arduino family. It offers the functionality of the Zero in combination with Sigfox connectivity. It features convenient ultra low power requirements: just two AA batteries are enough to run the MKRFOX1200 for six months!! Sounds like a nice sibling board to drive a Paperino ePaper? Let’s give it a try! After connecting the MKRFOX1200 and the breakout board, running the first sketch worked nicely and looked like this:

To understand how grey levels work we need to take a quick look into the principle of e-paper screens. 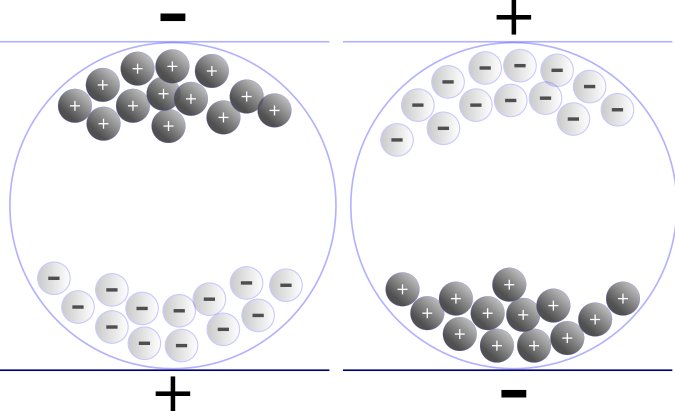 The display roughly consists of a backplane (a transistor matrix on a plastic substrate, pretty cool stuff btw) and the so called ‘media’ being laminated on top of it. The media is the part that we see. Inside the media are charged particles (black and white ones). We use the transistor array to charge the little pixel capacitors, which then generate an electric field across the media, just enough to let the little media particles move.

In the picture you can see the two extreme cases. In the left one all black particles are on the top; visible as a black pixel. On the right side all white particles are on top; we see a white pixel. Now, what happens when you don’t drive the particles to the extremes but mix them in the middle? Right: The user will see different shades of grey.

It’s quite difficult to achieve intermediate grey levels as it requires a tuned waveform, that’s why often only black and white pixels are possible. However, we are very happy that the display supplier gives us the freedom to use four different grey levels (otherwise known as 2-bit gray scale) and they look like this:

If you have any more questions or comments please feel free to ask!