One of the main advantages of open hardware is that it gives users the chance to understand exactly how it works. But open source designs also have the benefit of being more extensible. Because ScopeFun is completely open source, users can modify it or add new features simply by editing the source code.

To show how easy it is to customize ScopeFun, we have created a short tutorial. For the purpose of this tutorial we have implemented an averaging filter, inside the FPGA, that averages digital samples coming from the onboard AD converter. As we learned in our previous update, this has the effect of reducing noise in the captured signal.

Before we start hacking, lets review the main aspects of the ScopeFun design. 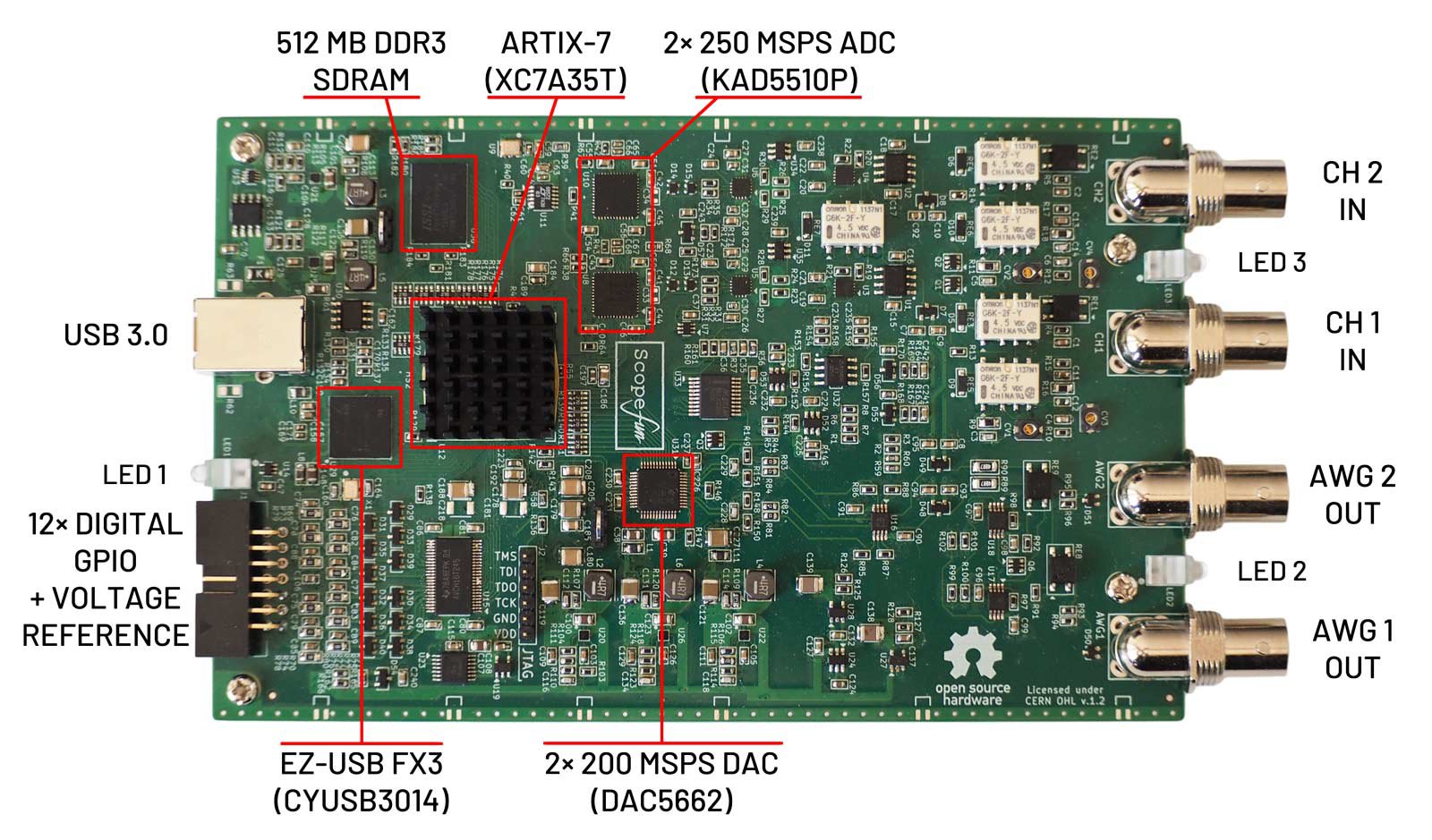 All the main hardware components are connected to the Artix-7 FPGA, which handles several tasks:

The FPGA is designed to process these tasks in parallel. This maximizes throughput and allows for independent operation of different design blocks. The oscilloscope, arbitrary waveform generators, and digital pattern generator can all work independently.

The main task of the FX3 firmware is to handle USB transfers between the FPGA and the PC. It provides this "bridge" through it’s DMA channels and its GPIF interface, which supports fast data transfer rates. The FX3 firmware also allows the FPGA and onboard EEPROM to be programmed through USB. The EEPROM is used to store the FX3 firmware and ScopeFun calibration data. This allows ScopeFun hardware to be used on different computers without the need to re-calibrate it. Another useful feature of the FX3 firmware is its support for Windows OS descriptors. This allows Windows to identify the drivers it needs when ScopeFun is first connected to a particular computer. This is possible because ScopeFun uses a standard USB driver, WinUSB, which is already included with Windows. 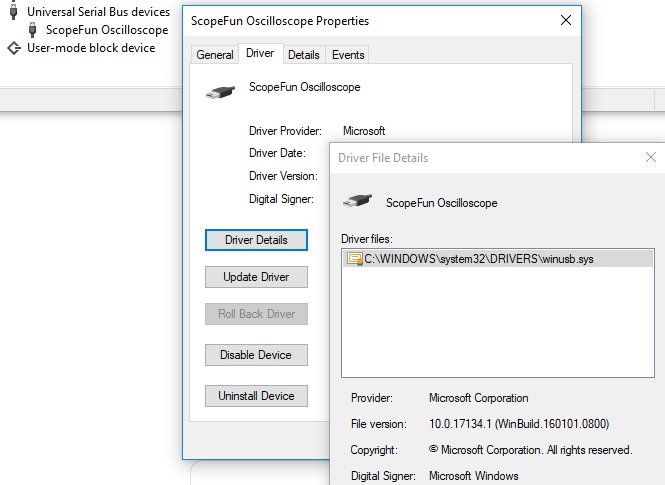 Implementation of the Averaging Function

We have seen, above, that ScopeFun’s hardware is controlled by data stored in its control registers. So if we want to give users control over the feature we are about to add, we will need to expand our set of registers. The new register will tell the FGPA to enable or disable our new averaging function. For reference, a list of all hardware control registers can be found on our Gitlab repository.

Now that we have implemented the averaging function, we need to give users a way to control it. The averaging function will be enabled if the controlling bit is asserted in the software and disabled if it is not. The following VHDL code snippet shows how the FPGA reads the contents of control registers in the main ScopeFun process.

Now that everything is ready on the firmware side, we just need software to control our new feature. To do so, we will add a checkbox that can be used to to enable and disable the hardware averaging function. We can do so easily with a tool called vxFormBuilder, which generates the necessary UI and callback code: 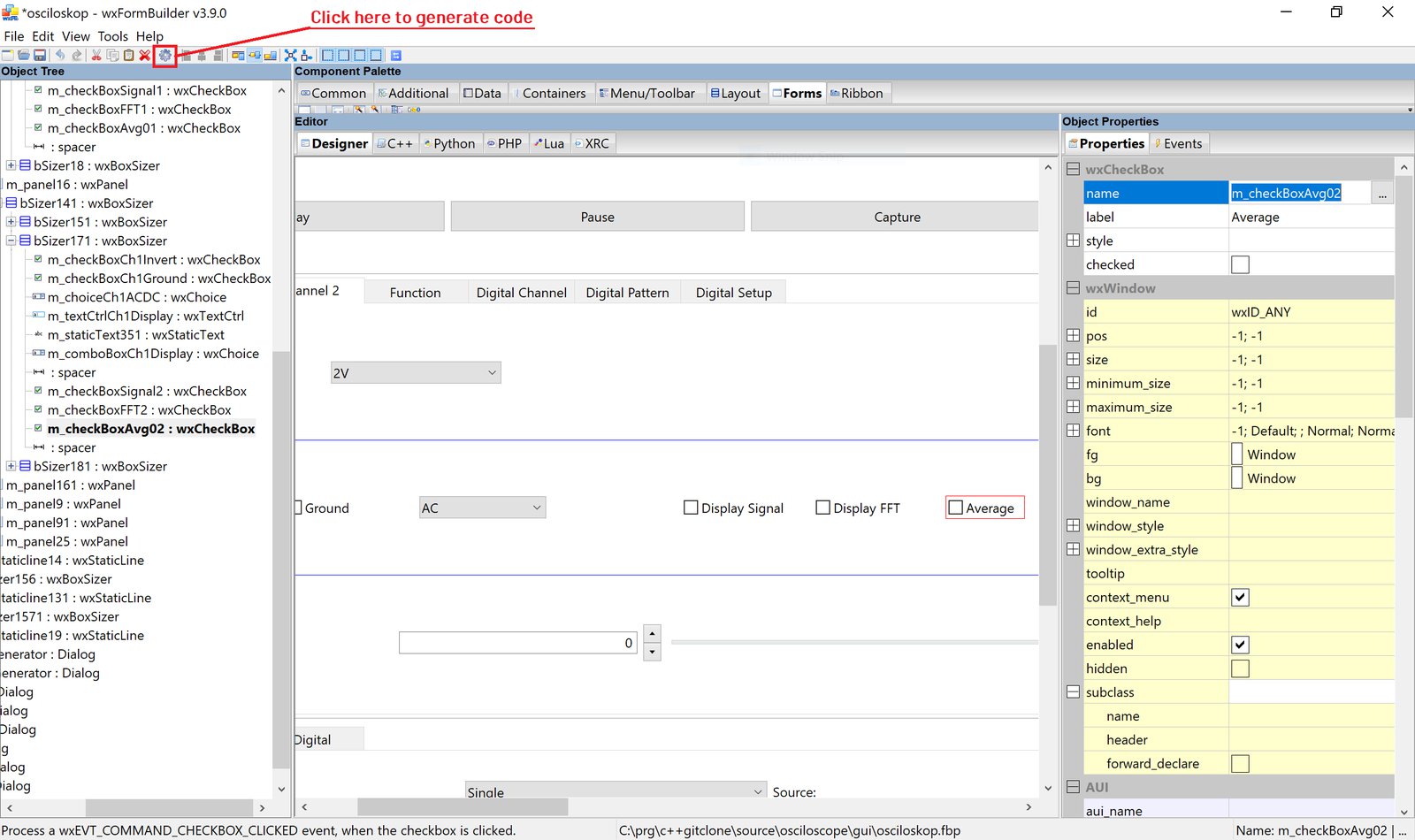 In the screenshot below, we have added the new control register: 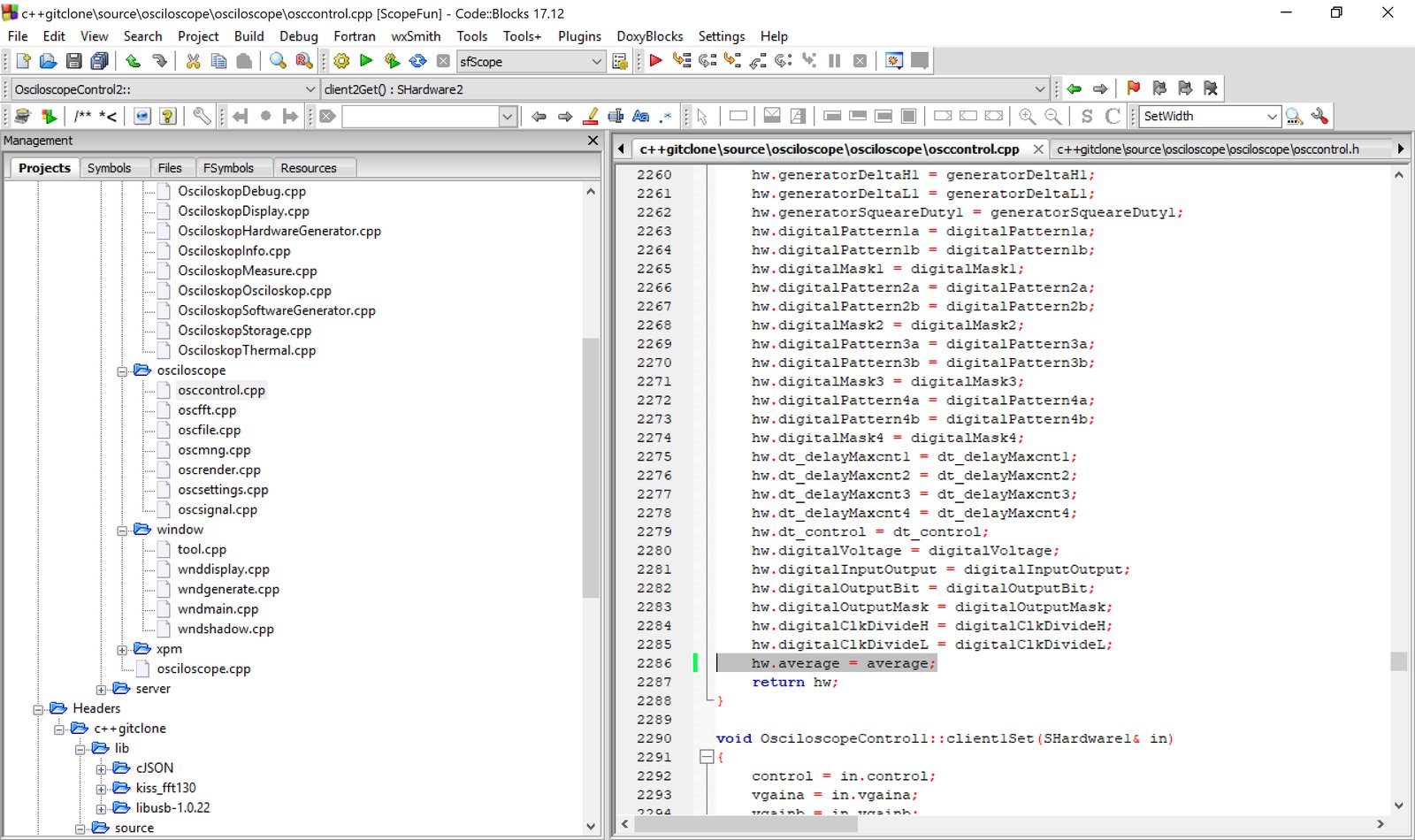 Then we implemented a function that asserts the register values depending on the value of the checkbox: 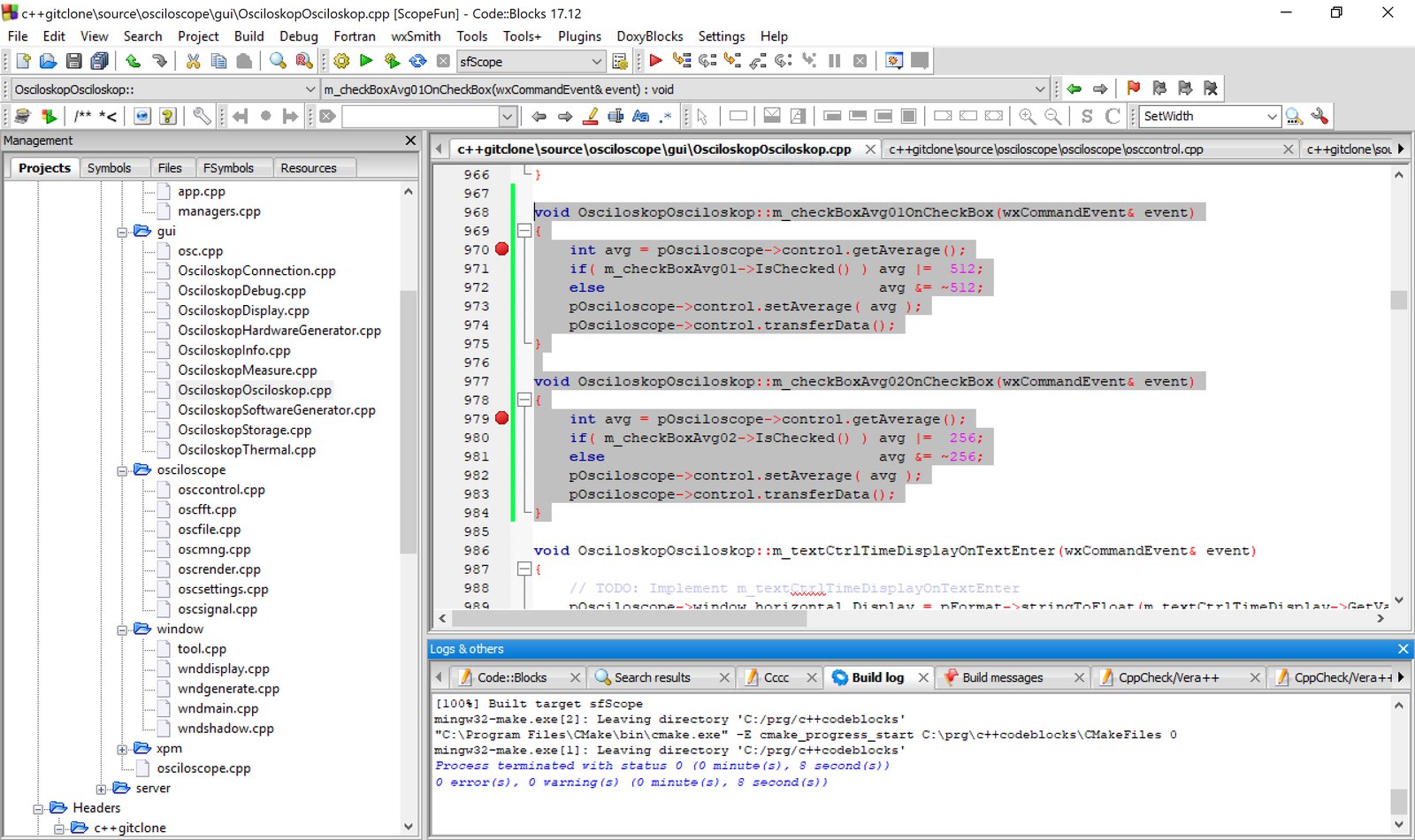 In the final step, we update the Python API wrapper so that our new register can also be controlled by a script. For this purpose we simply run the swigpython.bat script, which generates an updated API.

The purpose of our averaging filter is to reduce noise, so let’s see how it performs. To do so, we have taken baseline noise measurements on the lowest vertical scale setting, which is the noisiest: 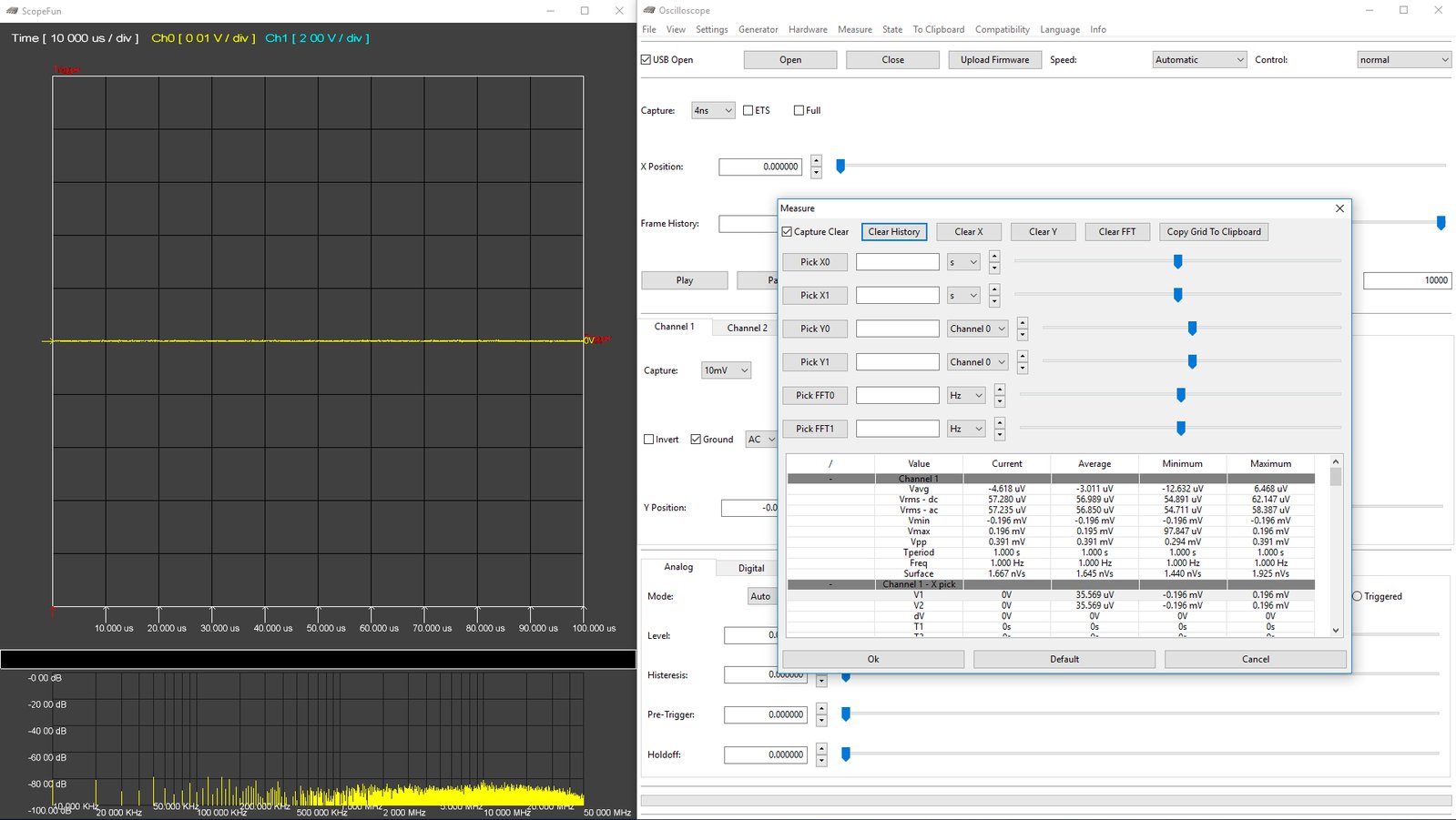 We have learned about the ScopeFun’s architecture and demonstrated a simple process by which we can extend its set of features. As expected, we have seen an improvement in the level of baseline noise after enabling our new averaging filter. We believe this level of flexibility will greatly benefit engineers, developers, electronics enthusiasts, and other members of our community.