Production Status and Other Updates

Sorry for sporadic updates: as usual, one thing led to another and here we are. In this update we want to share where the production is, how SlimeVR has evolved over the last few months, and when everything should be done.

Right now, we are manufacturing the first batch of SlimeVR Trackers, and it’s mainly limited by the amount of chips we will have. The initial campaign and Crowd Supply pre-order was for 30000 trackers (one main tracker or one extension is one tracker, one set contains 5+ trackers), that’s how many trackers will be produced for the first batch. We ordered 32000 BNO085 chips, so 2000 more trackers will be in a batch 1.5 shortly after. This covers all orders placed during the campaign and up until around May 2022. If you ordered later - your order will be in the second batch, which we will discuss down below.

Here is a breakdown of the state of each part of SlimeVR manufacturing process for the first batch.

What we have right now: 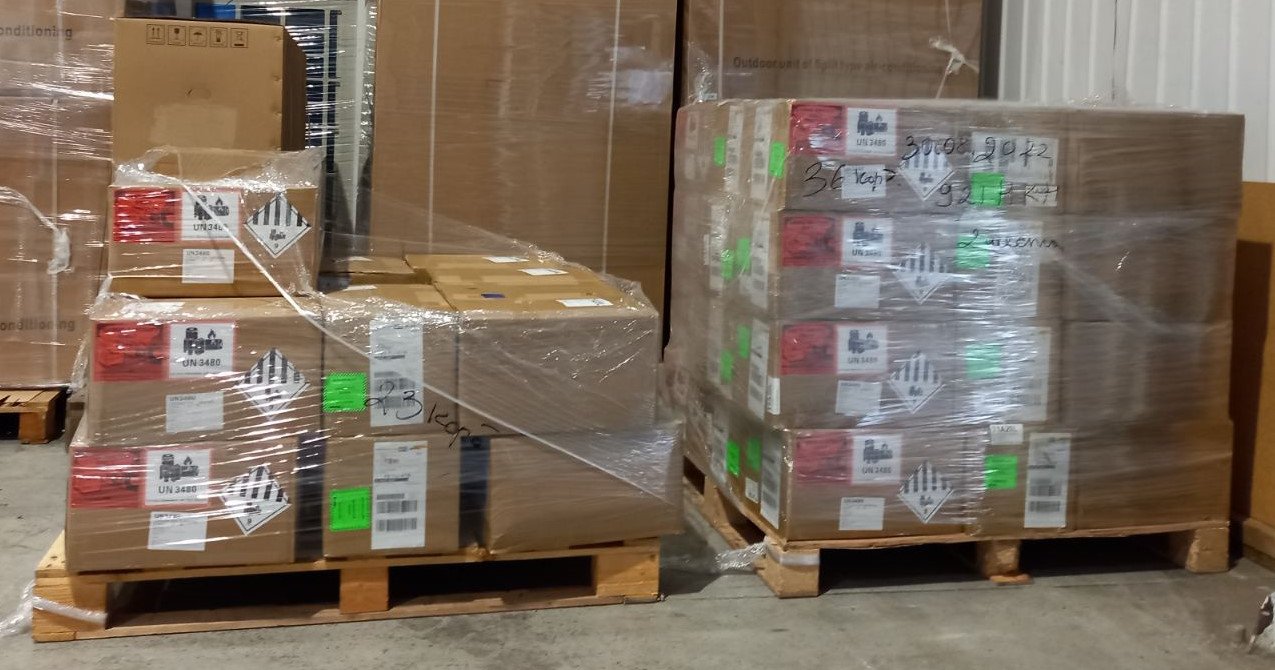 Don't worry, in these batteries is a bit less power than in a Tesla Model S. 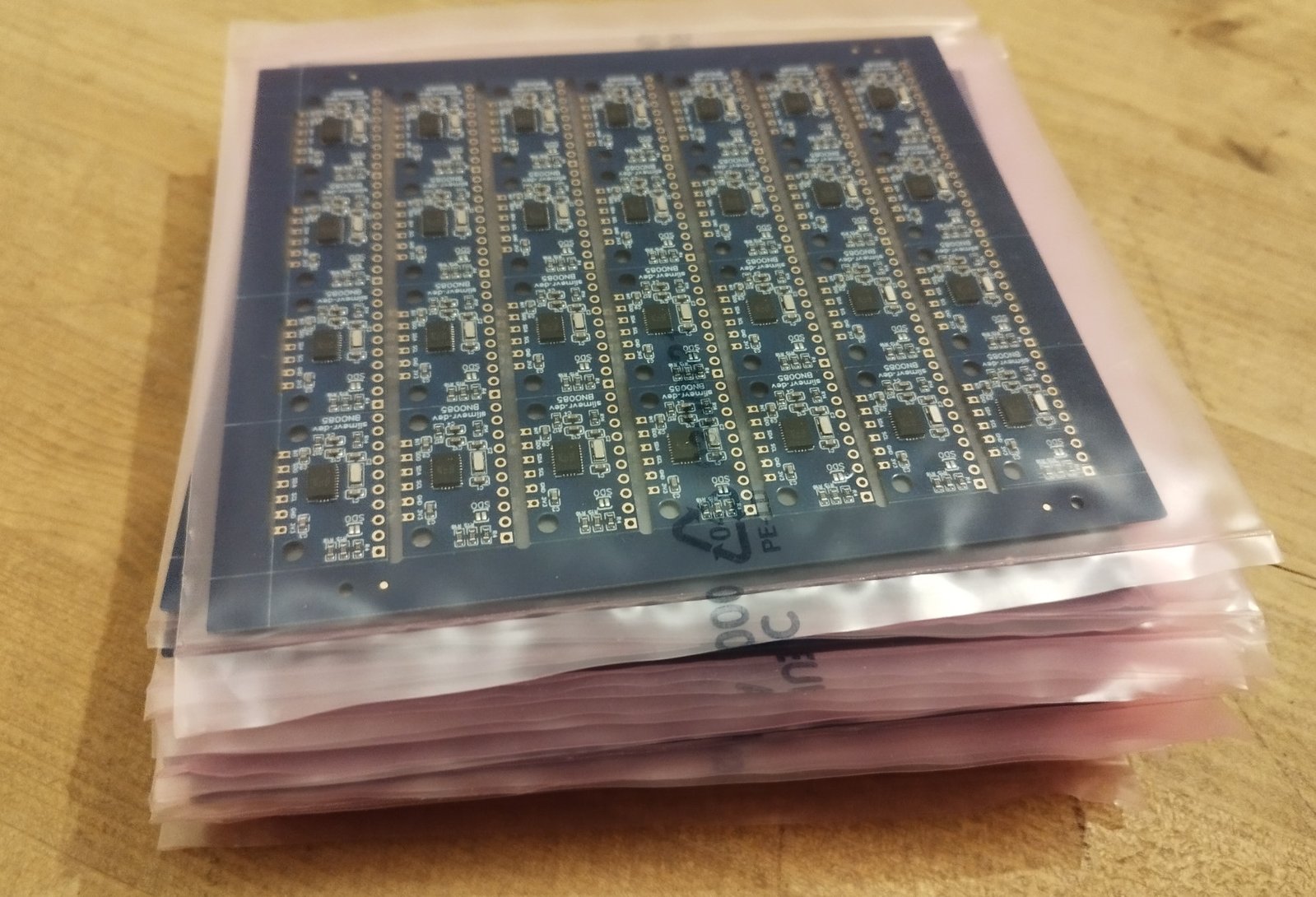 How IMU modules arrive to us, all neatly packaged 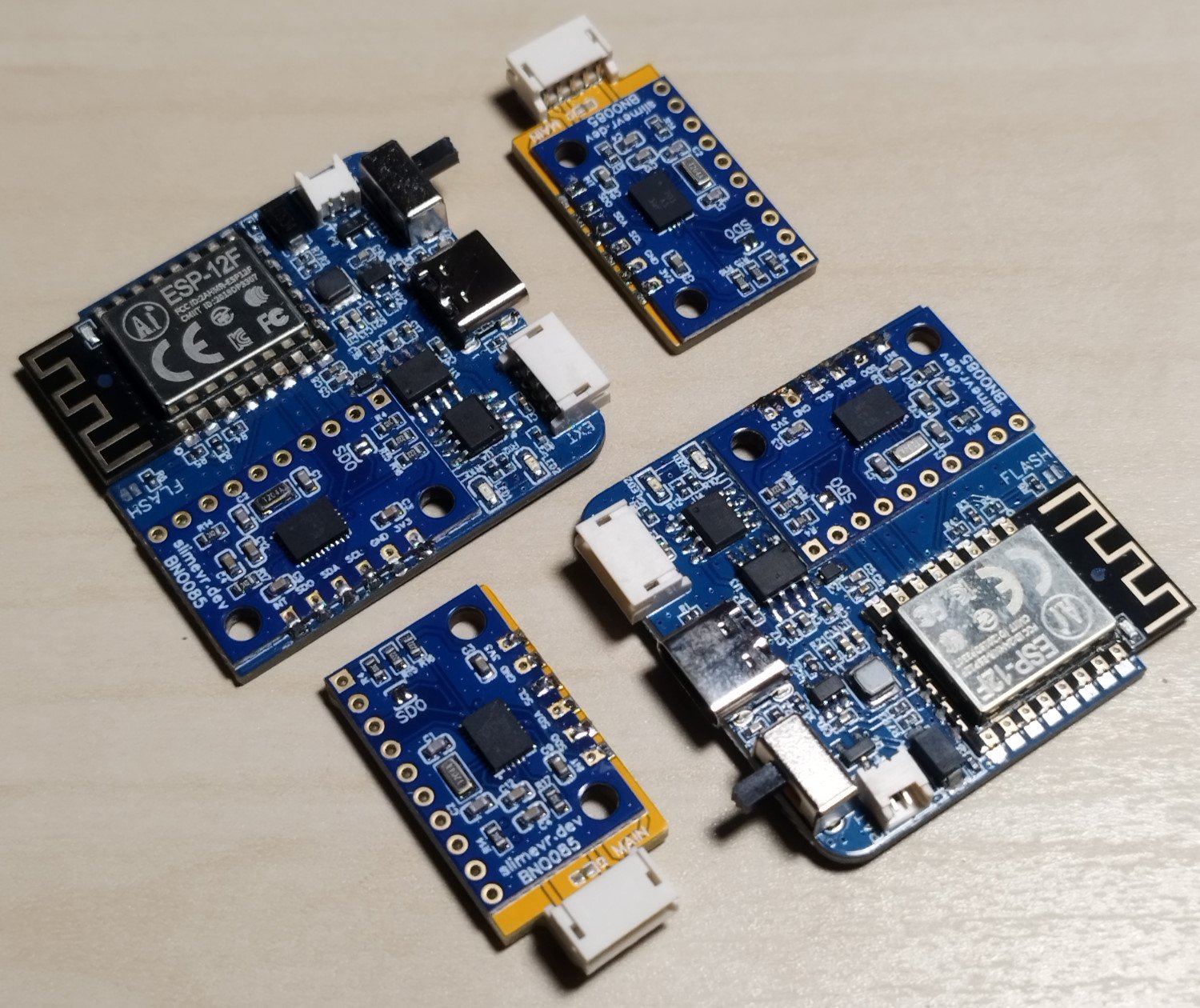 For BNO085, we did the best we could, but chip shortages in the year 2022 were more powerful than we were. Even the FSP201 chip that we had a lot of hopes in the last update didn’t work out, as the chip was delayed for an unknown amount of time (we even tested engineering samples!). We also couldn’t increase the allocation of chips for this year, which is why we had to push post-campaign sales after a certain point to the second batch. For 2023, we are ordering way more chips. Hopefully this will help not only cover all preorders, but then make SlimeVR actually be in stock for immediate purchase.

For straps, cases, and other components, the delay is our fault. Everything we discussed in previous updates, in addition to some oversight on our part led to us not ordering everything until last moment. And some things still aren’t ordered: packaging and cases, due to design changes we’re working on.

Because of this, we expect the first 18000 trackers to be assembled and shipped to Mouser by December 15, and second 12000 trackers to be assembled and shipped by December 30. After this, they will take some time to ship to the Mouser warehouse, and then some processing time to be shipped to backers. Which means we expect SlimeVR to start shipping mid-to-end January 2023, or 2 more months delay from what we projected last time.

We are once again sorry for the delays and inconvenience. This journey hasn’t been smooth sailing, but we’re trying our best to be open about all hardships that we face, and the state of the project, and we are immensely thankful for all the support we receive from you. If you want to see everything as things happen, we post weekly updates in our Discord, and we have a separate channel where we update live on the status of shipments and parts.

As we mentioned above, only 30000 SlimeVR trackers are in production right now - that’s the amount that were preordered during the initial campaign and what Crowd Supply pre-ordered for post-campaign sales. But, the amount of orders we received after the campaign were way more than we expected. Right away (in April!) we tried to increase the quote for BNO085 with the manufacturer, but even after much pressure, it was impossible to get even 1 more chip this year.

As a result, orders placed after the start of May 2022 don’t fit in the initial 30000 Slimes, and have to be pushed to the second batch. We still don’t have confirmation from CEVA on when we will receive the chips in 2023, but it’s safe to assume that we will get at least some in Q1 that should be enough to cover the rest of orders placed this year, and they will be shipped in March-April 2023. So if you ordered SlimeVR after the start of May 2022, you can expect your order in April 2023. This includes orders placed right now, too. More information will come when we get confirmation from CEVA, and we will update you right away.

Since we ordered 32000 BNO085, we will have 1500 chips left after the first batch (some will be used for development and similar things). We plan to make Slimes out of them sometime next year, after ordering everything else for the second batch. For now, there is no lead time for this small 1.5 batch.

Of course, during all these delays, we weren’t just sitting idly! Both creators and contributors have worked to make SlimeVR the best it can be during this time and continue to do so. Right now SlimeVR has more than 60 contributors as well as a community of tens of thousands people, many of which use DIY trackers and help test and improve the SlimeVR ecosystem. We don’t gather any usage statistics (because privacy), but we estimate that more than 2000 people are using SlimeVR, so it’s already a tested and proved technology.

This update is getting long, so let’s keep things short for now and go over new things with broad titles. If you want to learn more, we will post the next update sooner next time! Or you can check out our Discord, or search on YouTube for SlimeVR for videos by many SlimeVR creators.

It’s pretty neat! Last time we showed early version, and it has been finished since, and is being actively tested. 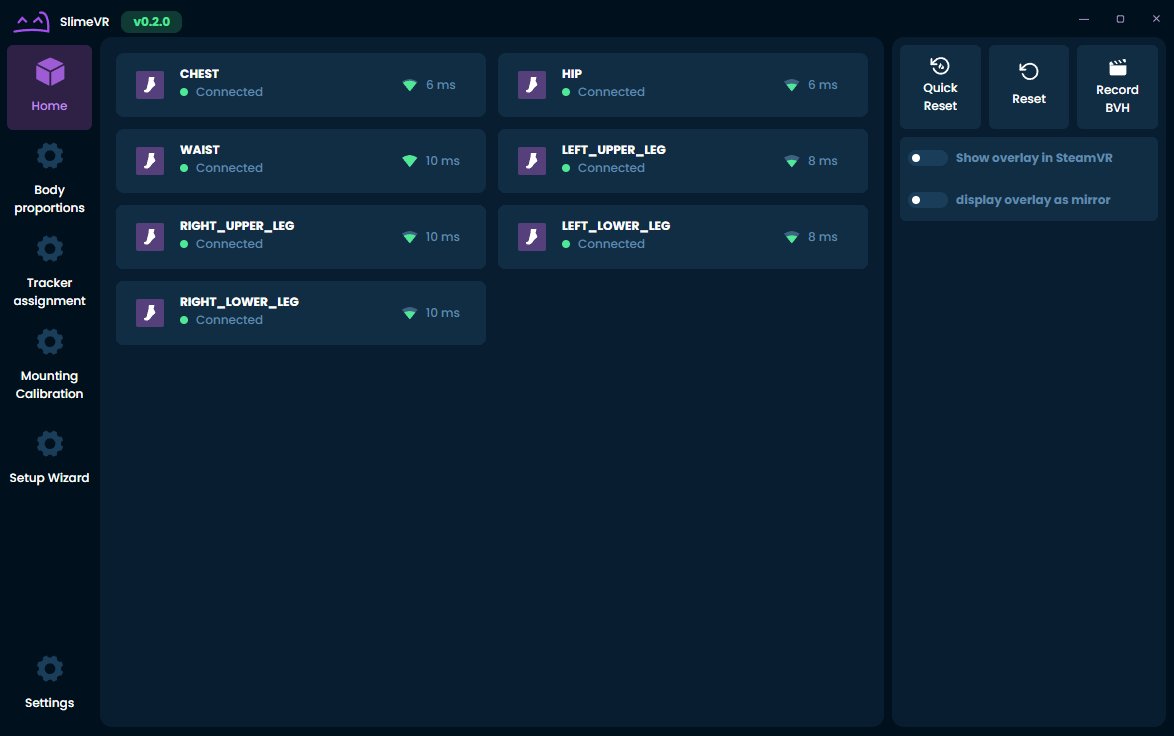 This was a big complaint by early reviewers, but now setting SlimeVR shouldn’t take more than 15 minutes the first time, and couple more each time you want to play! 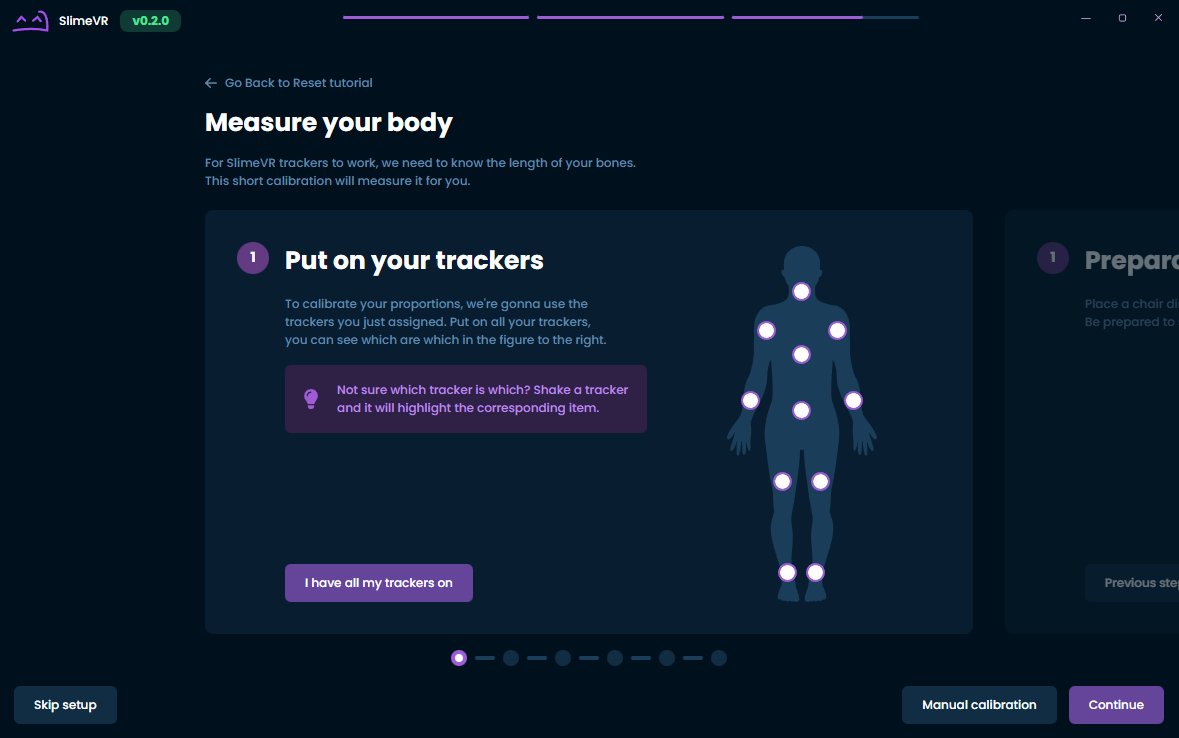 Interactive setup wizard will guide you through the setup process

We have tested a few case designs, but this is what we settled on. New design feels way better on most parts of the body, and the same on others (Chest). Can’t wait for them to be injection molded soon!

It's a render, but we'll have the real thing soon enough!

SlimeVR now supports full arms tracking, like elbows, hands, shoulders, etc, as well as 3 trackers for the spine for all your Deluxe Set needs ;) This is especially relevant now since VRChat started supporting many-points tracking recently without any mods.

Below is a video by ZRock35 that showcases tracking with different SlimeVR sets. It’s also a good demo of how much better the tracking has become over the past few months!

Did you know that even our hardware is Open Source? We have published Main Board and Extension Board designs on OSHWLab. Because of this, some people have already made DIY Slimes using these designs and helped test the boards, as well as find and fix errors!

We also finished the move to the Netherlands that we talked about in the last update. This was a big reason for lower productivity and delays, so we’re very glad that it’s behind us now.

Thanks again for all your continued support! We rarely update Crowd Supply page because it feels too important for smaller updates, and we’re constantly waiting for some new information that should give more clarity to everything, and as result don’t post updates. We will try to rectify this in the future by updating with the current state more frequently :3 So, see you soon!