While we’re negotiating shipping terms with chip manufacturers and suppliers, and waiting for (hopefully) good news about availability, here is some other good news about our progress so far…

A lot of people have been asking about using SlimeVR with an Oculus Quest (and without a PC). Our answer so far has been, "that’s impossible!" Of course, anything is possible, but this particular thing faces some serious challenges. Not only is there a chicken-and-egg problem, there is a farm-and-farmer problem… Making standalone Oculus Quest applications play well with SlimeVR would require support from SlimeVR, from application developers, and from the manufacturer of the Oculus Quest itself, Facebook.

With that in mind, we contacted the developers of SideQuest and VRWorkout, as well as members of our community who are quite familiar with Android development, and set to work.

In the raw proof-of-concept shown above, a SlimeVR server is running on a PC that is connected to the same network as the trackers and the Quest. It sends FBT data to VRWorkout running on an Oculus Quest 2. We know this is not "true standalone", but…Rome wasn’t built in a day! To be clear, it is still safe to say that SlimeVR does not work—and may never work properly—on a standalone Oculus Quest. Most people who ask about FBT for the Quest are interested in applications like VRChat. And even if we manage to make SlimeVR work with standalone Quest apps, without a PC involved, we’ll still need support from game developers and maybe even approval from Facebook (at least if we want to be included in the official Oculus store). So this is not yet a promise beyond simply, "we’re working on it!"

You should have a look at VRWorkout, by the way. It’s a free, open-source VR-fitness game that runs on both Quest and PC!

Our GUI is something we’ve neglected for a while, now. Truth be told, we just haven’t had enough free hands to work on it properly…which is why it’s a hacked-together Swing UI. But we’ve been working with the community, lately, to redesign it from scratch. Below is a mockup of that design, which we’ll get into production soon! 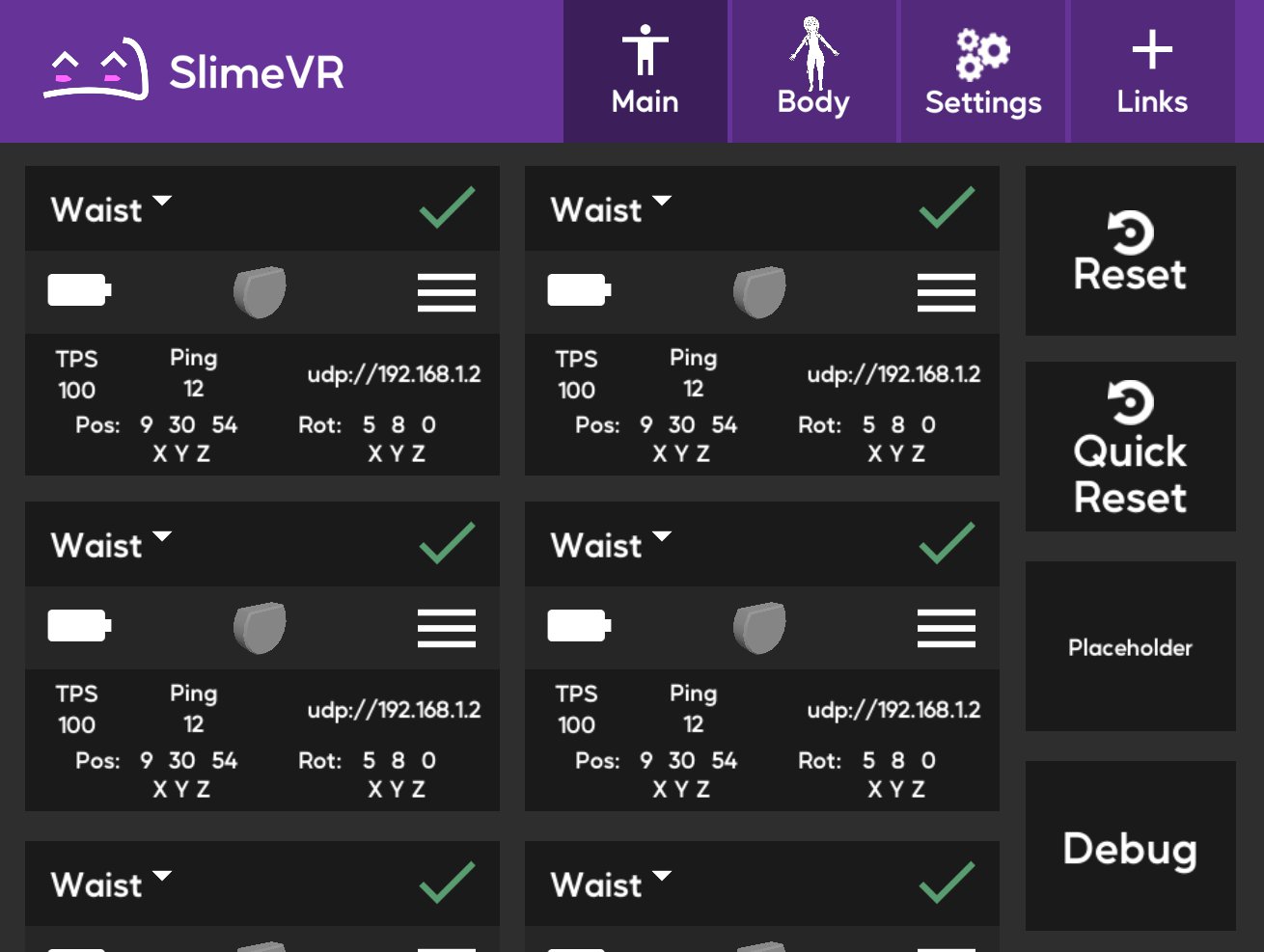 VMC, Motion Capture, and Other Applications

Our ultimate goal is to support as many platforms as possible. Ongoing Quest-compatibility work is adding support for WebSockets to SlimeVR, which means potential support for WebXR. We are also working to add support for VMC, a popular motion-capture protocol for VTubing. This should let anyone use SlimeVR with programs like VSeeFace. Our community is also working on giving SlimeVR the ability to export data to BVH files, which are widely used by 3D-animation packages (like Blender) for character animations.

There is an exciting VR future ahead :)