Thanks everyone for supporting the Tigard campaign. I knew other people would be interested in it - but had no idea HOW many people would!

Thanks also for your patience since the campaign ended - We’ve spent the past week working on logistics to make sure everything is set in motion. This week I’ll update you on what is and isn’t ready to ship, what’s being assembled, what’s changed, and what will happen once everything is delivered.

Most of you that pledged early got an estimated delivery date of February 18. That was a conservative estimate based on the number of Tigard, BitMagic, and Class Kits that were in our hands ready to ship. As that lot of BitMagic, and then Tigard were claimed, the ship date pushed out a few months at a time. We were waiting for the close of the campaign to figure out the size of the second production order.

288 Tigard boards are tested, flashed, bundled, packed, labeled, and ready to go to CrowdSupply to ship out to backers. In a few days, an additional 144 will be ready as well. In addition to Tigard and the wiring harnesses, there’s a pair of Tigard stickers for you in each bag. 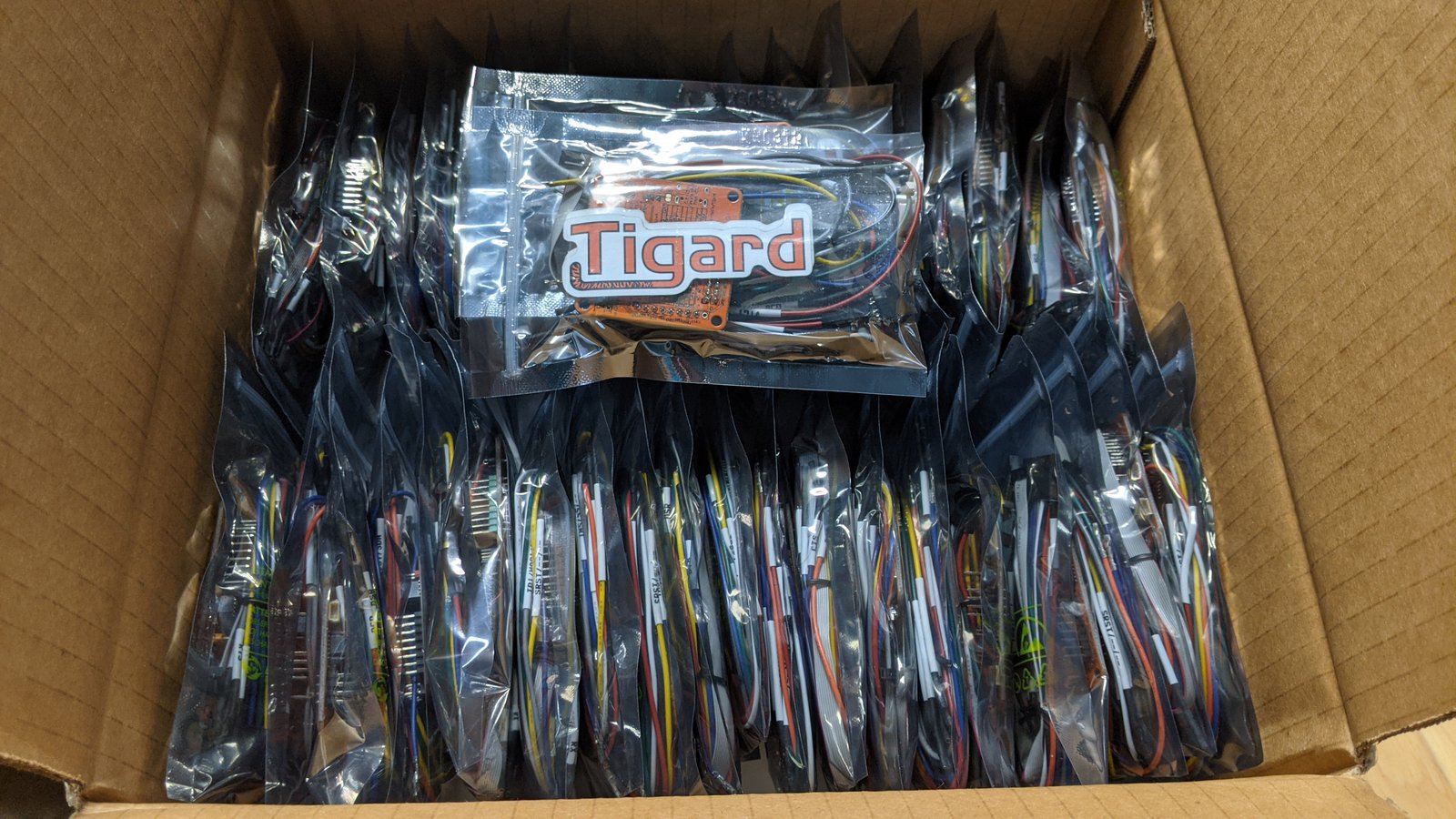 I mentioned in the last update that the entire BitMagic supply was stolen on it’s short journey from 1BitSquared to SecuringHardware, but we should still have replacements in time to meet the original February 18 delivery date.

BitMagic is one of the tools in the Applied Physical Attacks Class Kit. I debated shipping them with alternate logic analyzers but the logistics of revising the course material and distributing replacement BitMagics when they’re available - combined with how soon we hope to have them - did not make it worth the additional effort.

December is a slow time for some industries and a busy time for others - to our surprise, our contract manufacturer has committed to 3 week turnaround - half the time it took for the smaller original batch of Tigard boards. They’ve already been paid for and the PCBs are in production. The assembled Tigards are due January 6.

In the past, all BitMagics were assembled in-house by 1BitSquared. Considering 1) The huge demand for BitMagic 2) The lost shipment and 3) The Glasgow campaign they’re working on launching any day now, we decided to outsource BitMagic assembly to fulfil the campaign pledges much sooner. Assembled BitMagics are also due January 6.

Our contract manufacturer sources most of the parts, but there are a few hard-to-find ones that are en-route to them now and should arrive before the PCBs are complete. One example is the colorful UART headers. I found myself mixing up the JTAG and UART headers on occasion. We placed the VCC and GND headers so that you’re unlikely to fry things when this happens - but it can be confusing until you realize the mistake. My solution was to make the UART header a different color, but it turns out getting custom length colorful 0.1" headers is not so easy - manufacturers want minimum order quantities in the tens of thousands at least. Undeterred, I ordered yellow 40-pin breakaway headers, snipped them down to 9 pins, and shipped them back for assembly. It’s time consuming - but well worth it in the end. 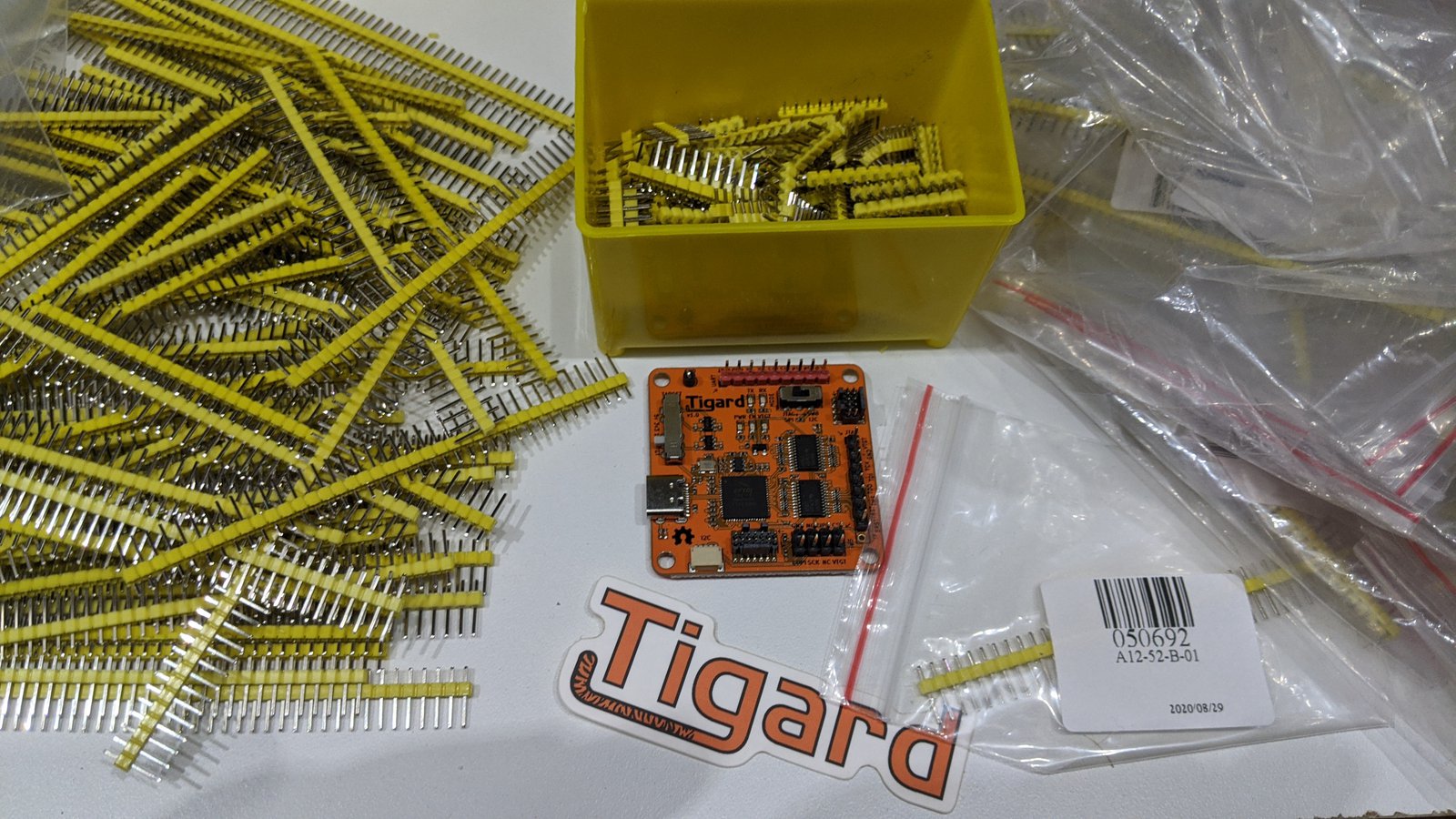 Both Tigard and BitMagic need include wiring harnesses. I used to make custom FTDI breakout harnesses for my classes, but there are WAY too many of you for that to be a good idea anymore.The cable manufacturer wouldn’t guarantee anything less than 30 days delivery - January 14 - but has always delivered ahead of schedule in the past.

Both Tigard and BitMagic have new V1.1 revisions for this production run:

Tigard V1.1 has mostly cosmetic changes, although the position of the logic analyzer port moved to give more clearance for the SPI/I2C header.

BitMagic V1.1 has a USB type C connector. This results in a slightly larger board, but hopefully reduces the number of cables you’ll need in the future. Also, the PCBs will be a unique ‘magical’ color.

What happens once everything is delivered?

Both Tigard and BitMagic have test and programming procedures. Both are automated - but this is still hardware, so there is a bit of manual plugging and unplugging necessary. Once tested and programmed, they’ll need to be kitted, labeled, and then shipped to CrowdSupply. This will mean a few days before we’re able to turn them around and pass them on for fulfilment.

What could possibly go wrong?

More lost packages. Manufacturing errors or defects. All the usual issues which do happen, but hopefully happen rarely. We’ll keep you updated!