It is often valuable to be able to send messages from the target system when monitoring its state. Black Magic Probe (BMP) implements a USB serial port that performs this task. It provides a serial connection that you can attach to a UART of the target. BMP will then send the data it receives through this connection to a second USB serial port on the host computer. ctxLink now provides the same functionality, over the network, by exposing a separate TCP port to which client applications can connect in order to receive serial data from the target.

The only requirement is that the client application offer a "raw" connection mode capable of displaying data exactly as it is received, without a protocol wrapper. Many terminal emulators support this mode. For the example below, we will use PuTTY running on a Windows host system. 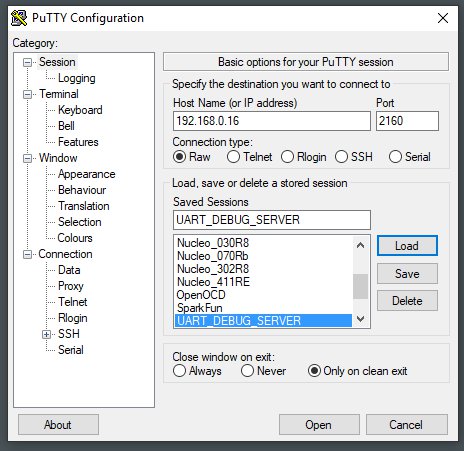 When you open the connection, the terminal will show a prompt from ctxLink: 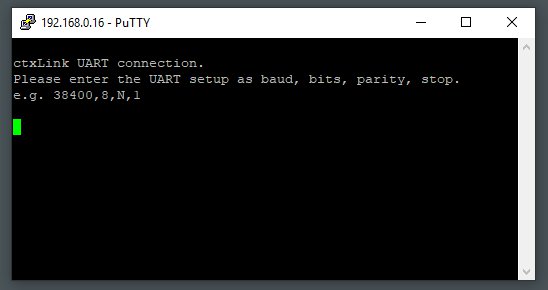 Enter the serial port configuration of the UART on the target system so that ctxLink can configure its UART to match it and receive data.

For this test we set up a Nucleo-F411RE to send a short, periodic message to one of its serial ports. Using the serial cable supplied with ctxLink, connect the transmitter output from the target UART to ctxLink. Note that the UART connection uses the same level converters as the SWD/JTAG interface and supports the same wide range of input voltage levels.

The short video below shows the configuration of the UART and the messages from the target:

The next feature we are adding to ctxLink will be support for the transmission of data from the target MCU by way of the SWO connection.

A provisional User Guide for ctxLink is online for those interested in learning more, such as how to provision ctxLink on your network.

It is exciting to see our list of backers growing steadily and we look forward to delivering a new debugging experience to each of you. Thank you for subscribing to receive our campaign updates, and please don’t hesitate to contact us if you have any questions about ctxLink!