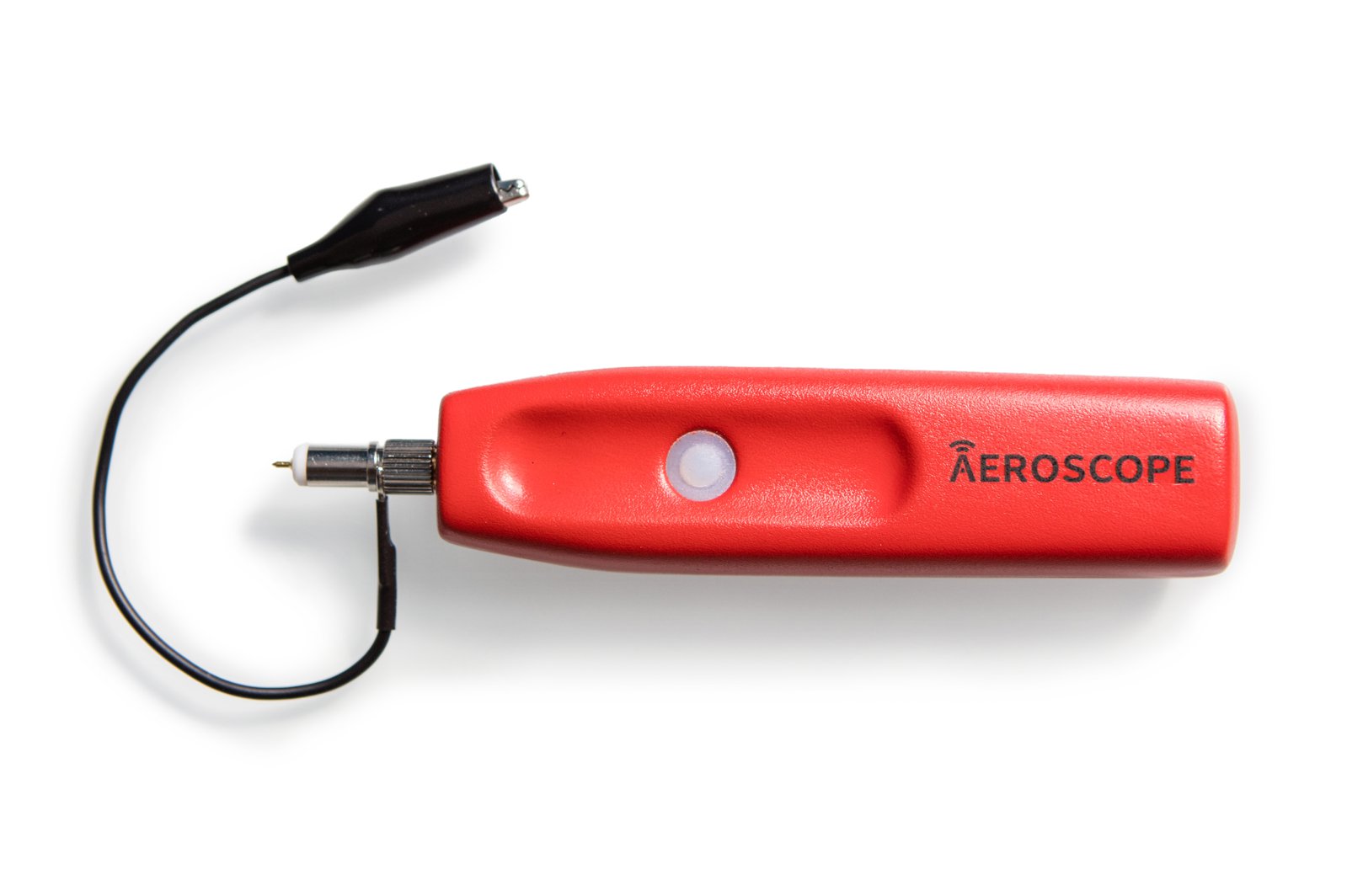 Aeroscope is a wireless oscilloscope probe that pairs to a user’s tablet or phone. It was designed with both portability and performance in mind. Aeroscope crams an impressive amount of measurement power into a small package. It includes a rechargeable battery for a typical full day of measurements and has a wireless range of up to 200 feet. 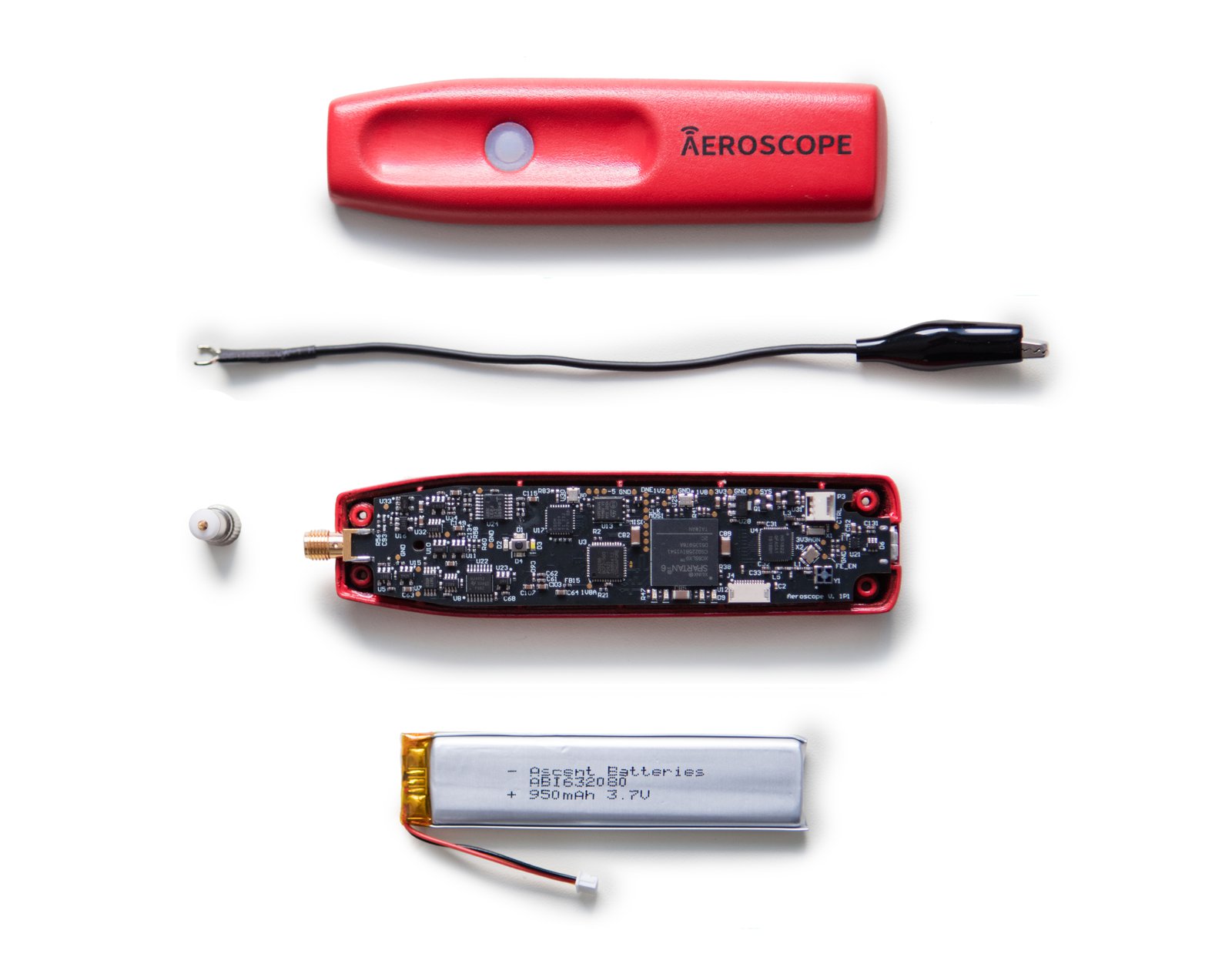 Aeroscope is small enough that it can be embedded inside of mobile systems. This opens up new measurement possibilities for anyone working in fields like robotics or drones. Imagine measuring the power draw of your robot as it is driving around, in real-time or debugging your autonomous vehicle in the field from a safe distance away. You can even monitor signals on your drone while it is in flight. 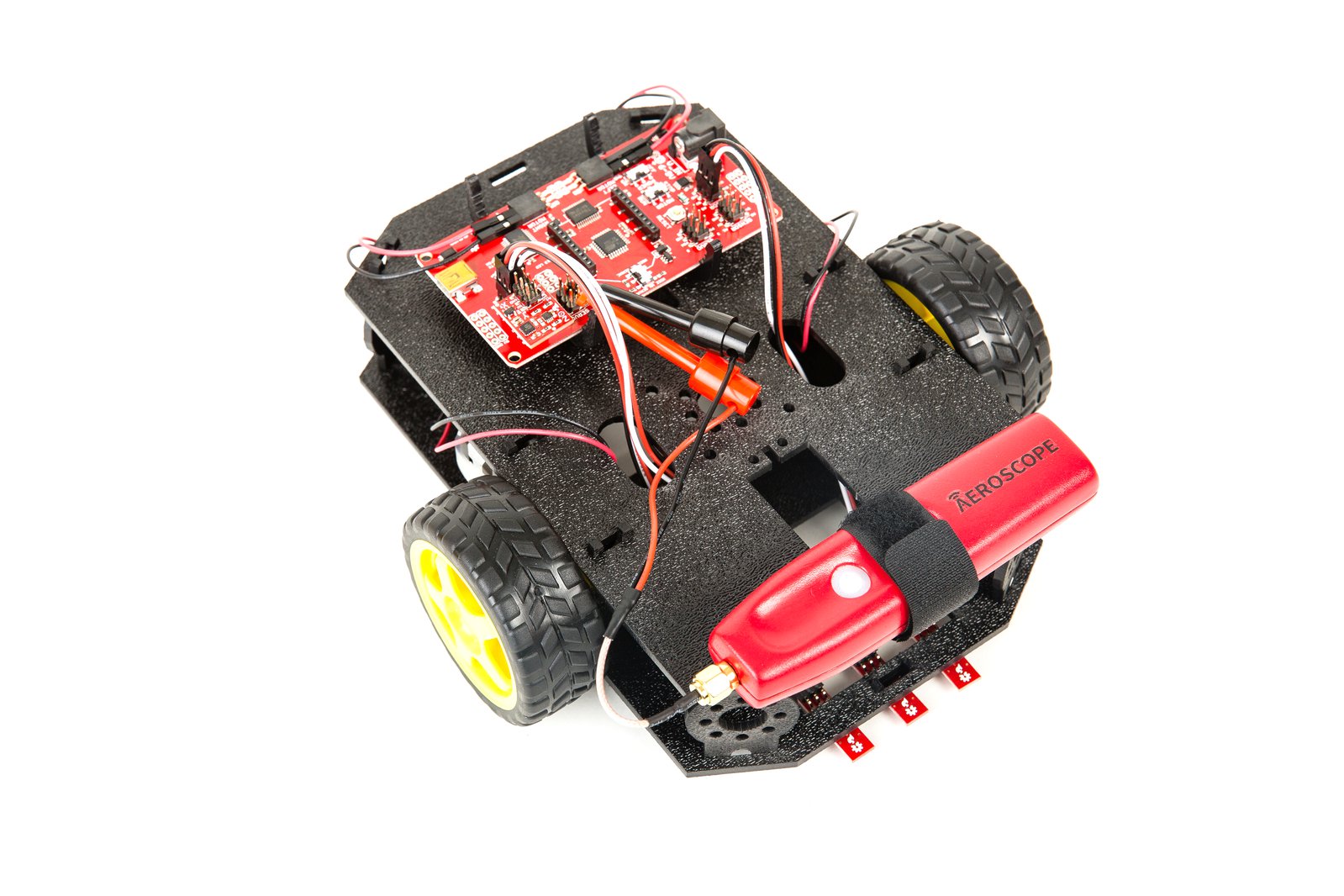 In addition to Aeroscope’s embeddability, its small size and battery power makes it perfect for work out in the field - no more lugging heavy test equipment or searching for AC outlets. Easily bring your oscilloscope with you to even the most remote locations. 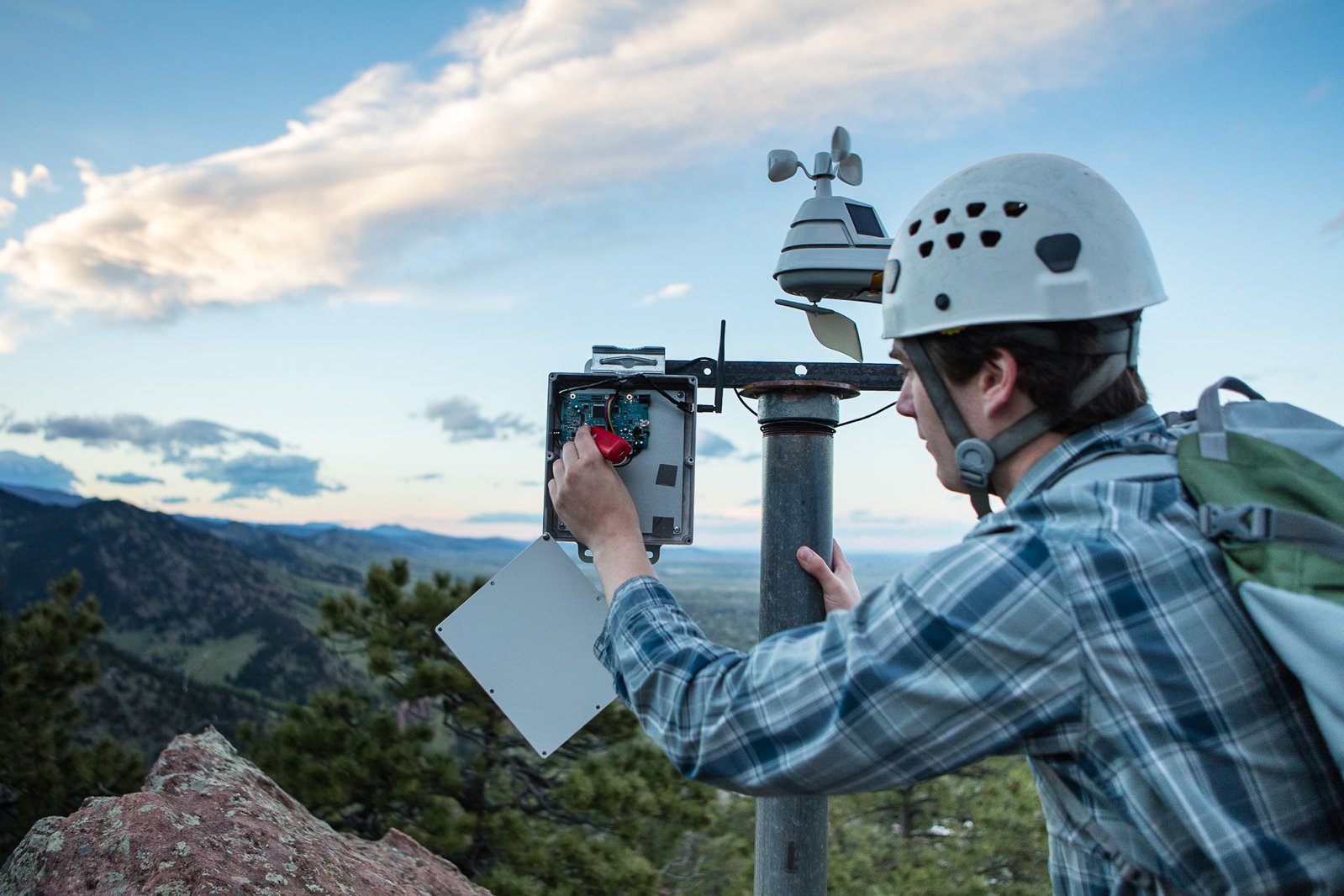 Aeroscope is a great fit for anyone who is space constrained. Its small size allows users to work on electronics wherever they like - a small apartment, a coffee shop, a brewery, or even in the backcountry. 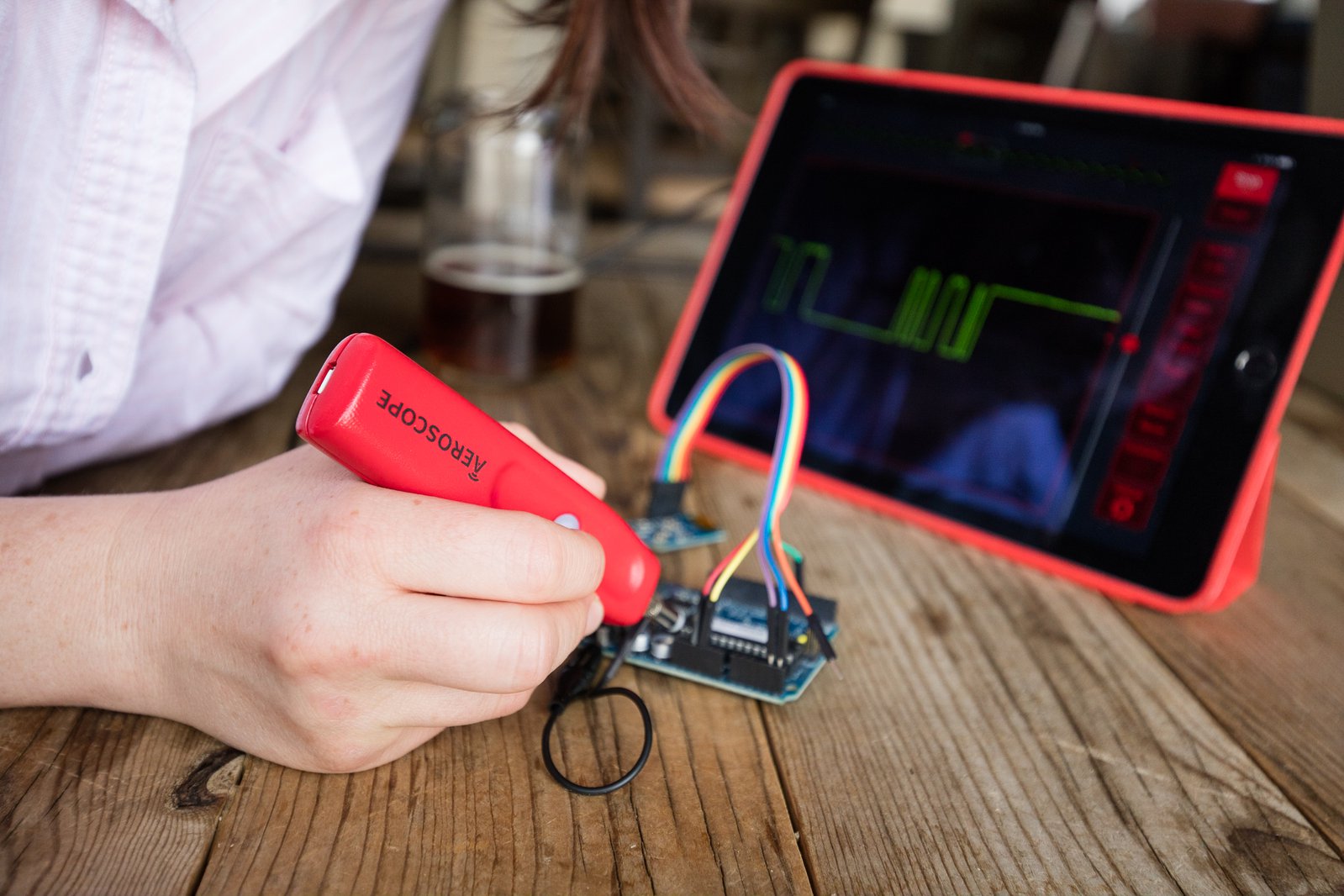 Since Aeroscope is wireless, it is fully isolated from mains ground. This means that you can ground Aeroscope wherever you like and you don’t have to worry about damaging it or shorting out your circuit. This comes in handy when probing things like switch mode power supply switching nodes. 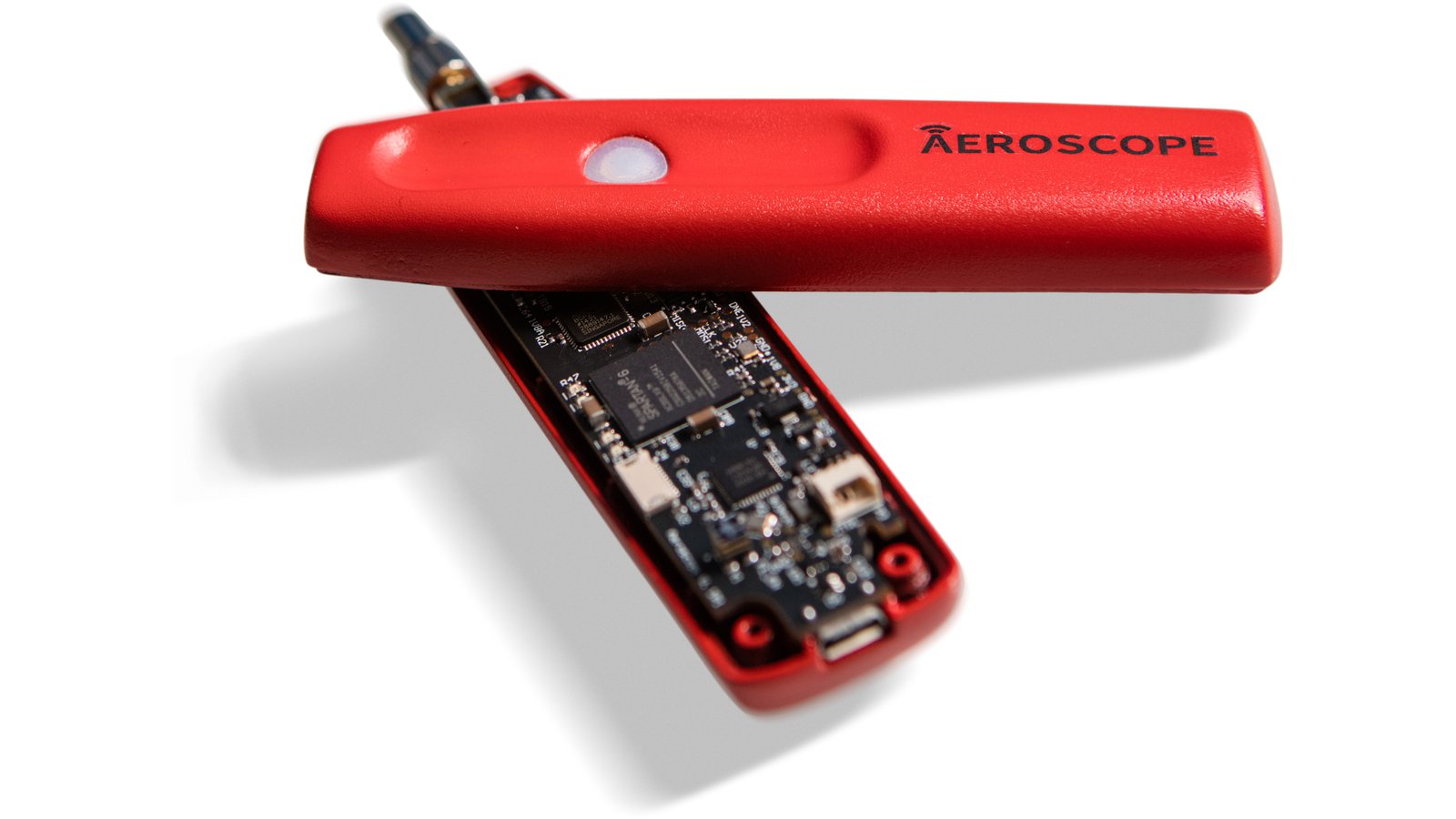 This model is also hosted at autodesk360.com.

Aeroscope’s app and protocol will be completely open source. You can use our app or write your own for whatever unique application you have. 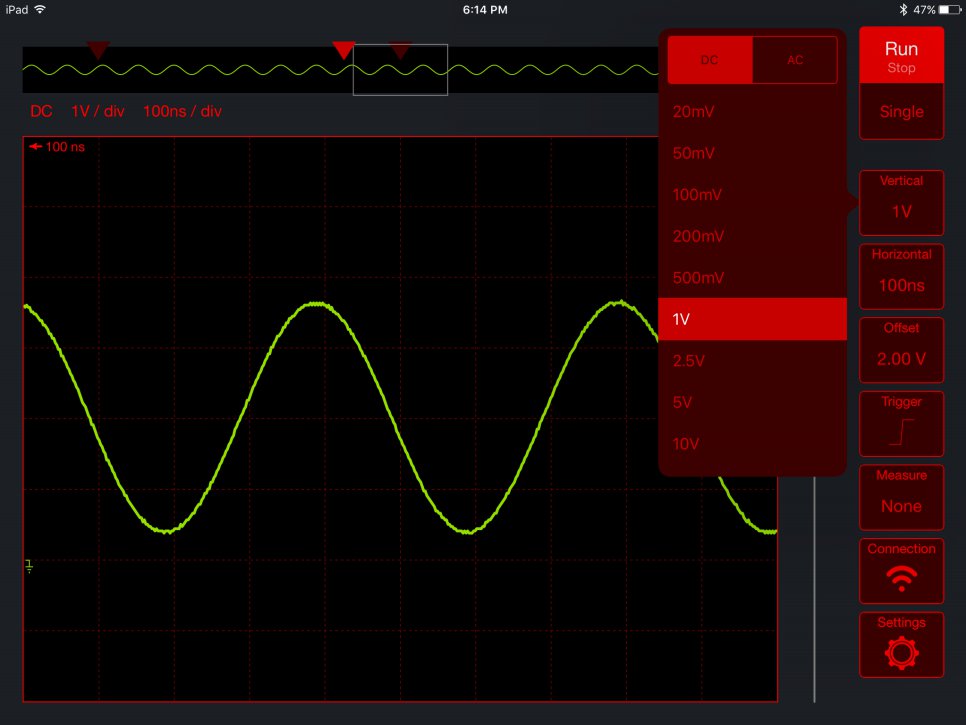 Screenshot of the Aeroscope app in action. 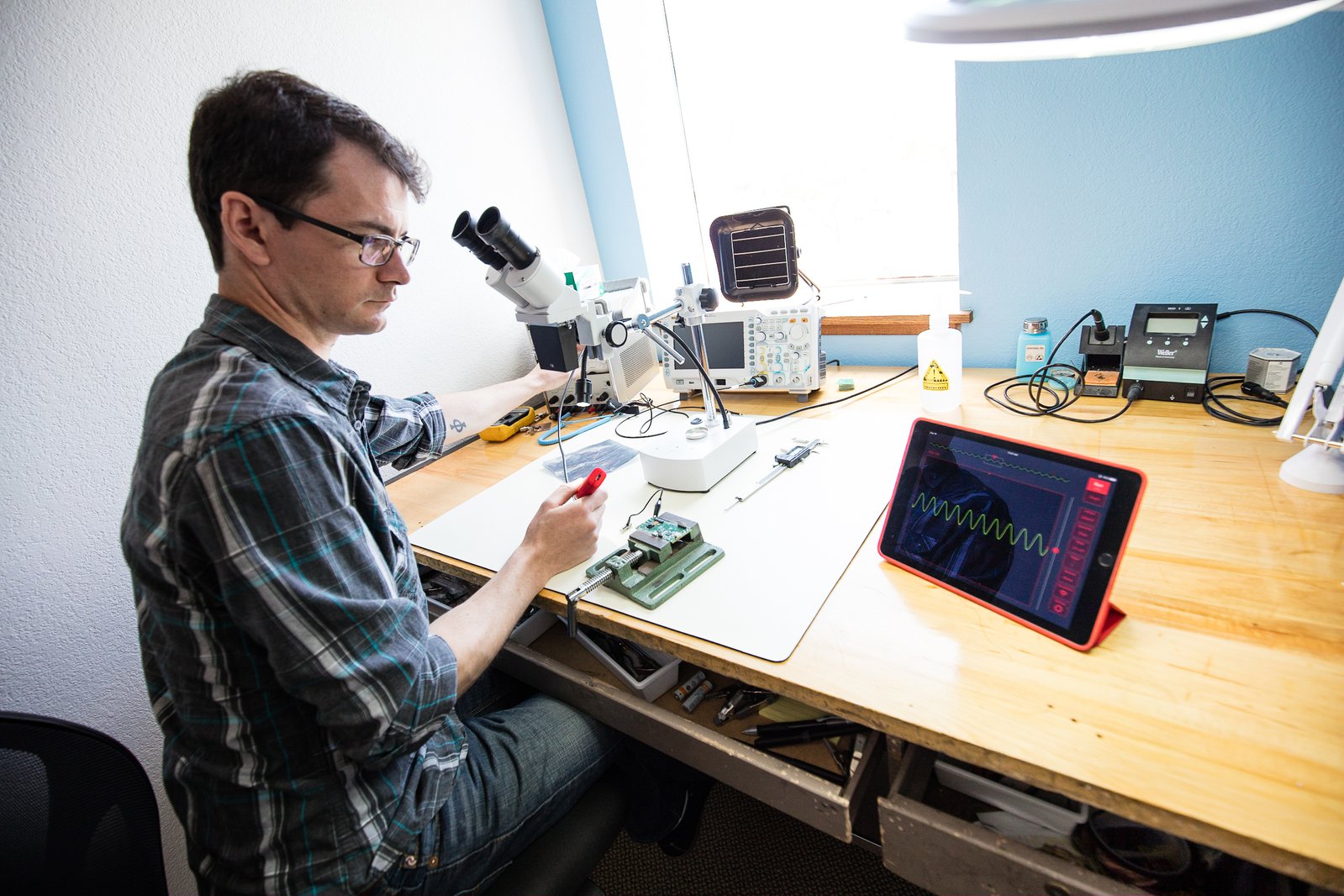 We have been working with a US-based manufacturer that will produce Aeroscope. This manufacturer has over 30 years of experience in low to high volume electronics manufacturing. We have traveled to their Wisconsin-based plant and feel confident they will be a great partner to help bring Aeroscope to market. 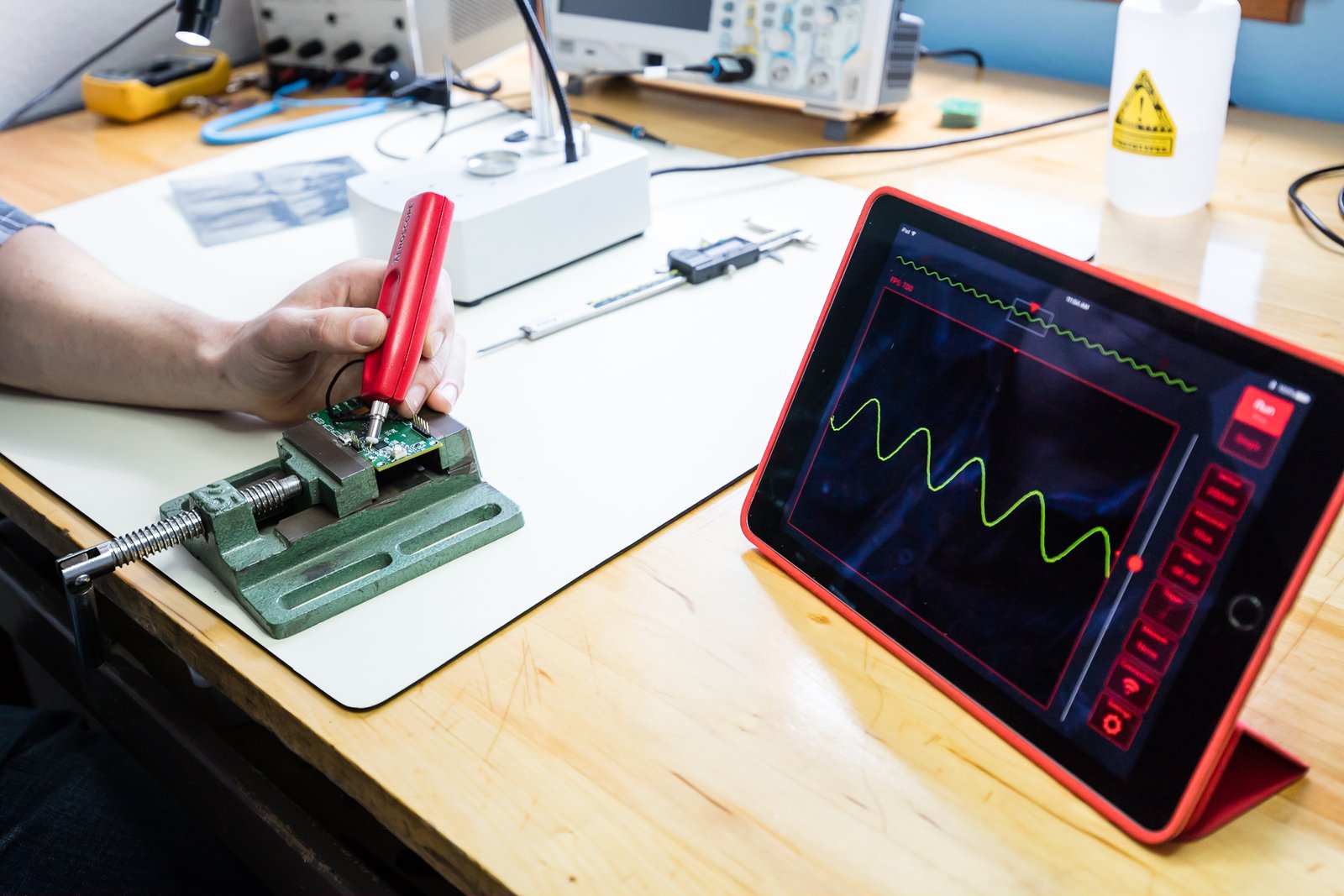 We plan to ship all backer rewards by December 15, 2016. There will be no shipping charge for US addresses. We will be charging shipping for international orders.

We have been working on Aeroscope for the last two years and have reduced most of the technical risk associated with the product. In addition, we have taken steps to reduce our manufacturing risk. We engaged early on with a contract manufacturer to review our build/test plan and solicit feedback. We have pre-tested our product for radiated emissions and ESD compliance in a test lab to prepare for our formal compliance testing. Lastly, we have had consulting engineers review our mechanical design for manufacturability and robustness.

The Aeroscope team has a combined 20 years of experience bringing new products to market and are confident that they can handle any challenges that may arise. However, bringing a new product to market always includes some risk. There is uncertainty associated with compliance testing of devices, especially when shipping to both Europe and North America. There could be unforeseen delays with vendors, quality assurance, or part shortages. We have built margin into our schedule to allow for these unforeseen delays and will let our backers know if there are any problems that will affect the ship date. 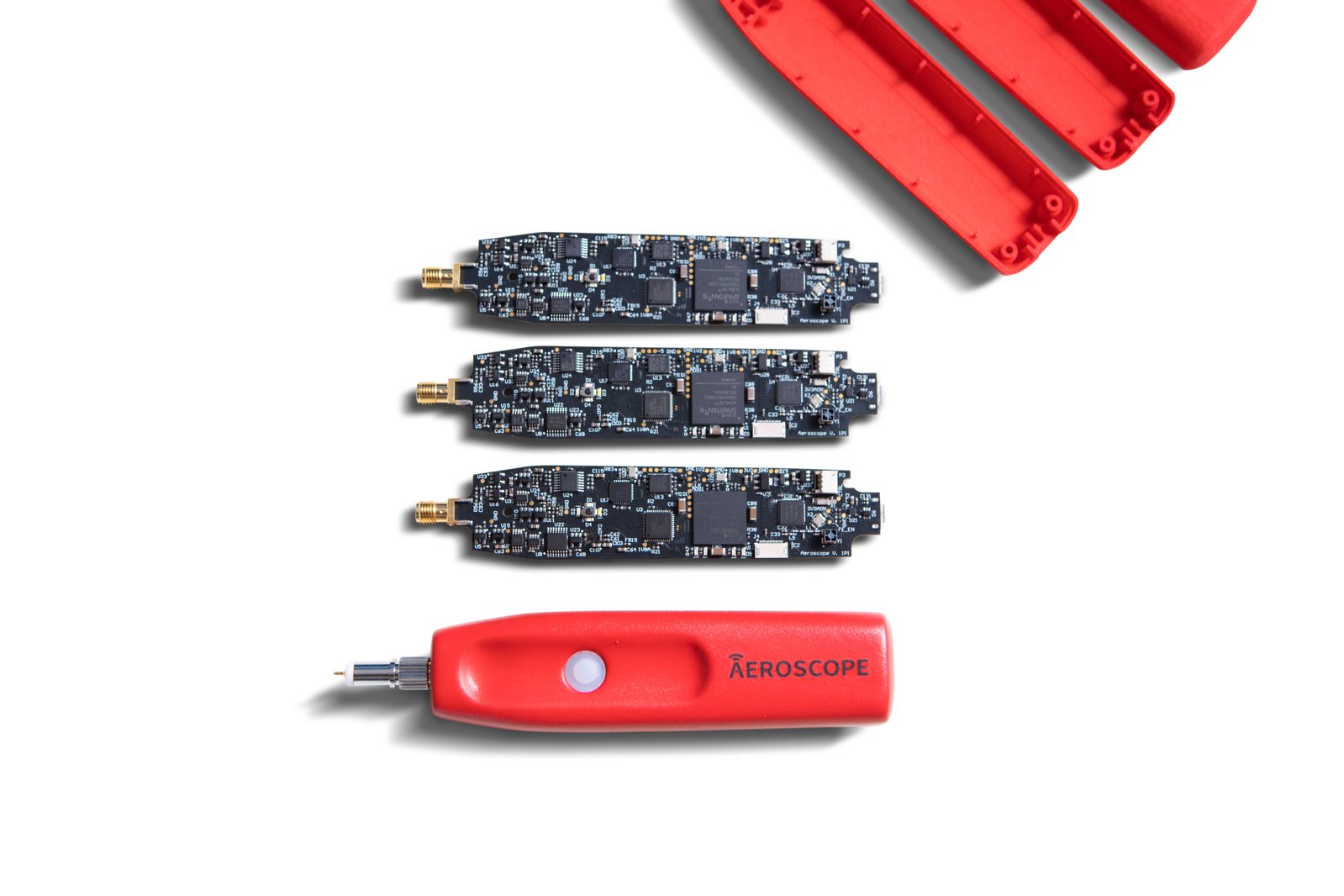 Q: How is it possible to operate a high sample rate oscilloscope over Bluetooth data rates?

A: Aeroscope can operate over Bluetooth (BT) data rates because the "guts" of the oscilloscope all reside within the probe itself. The analog section, ADC, and memory are all located inside the Aeroscope probe. The BT link is only used to display the video frames of the data that Aeroscope has captured. Like other oscilloscopes, data is not streamed continuously from the ADC to the display (phone or tablet in this case). The step-by-step process is this: Aeroscope captures enough data for a video frame at 500 MSPS, this data is stored in a memory buffer, the frame data is then read from memory and sent over the BT link to be displayed on the user’s device. This process happens repeatedly for as long as the capture section receives a valid trigger.

Q: What is an oscilloscope?

Q: How is an oscilloscope different than a multimeter?

A: The first difference is what is measured. Oscilloscopes typically only measure voltage whereas multimeters also measure current and resistance. But, the biggest difference is the time scale of measurement. An oscilloscope can be compared to a high-speed movie camera while a multimeter would be more similar to a conventional movie camera. With a multimeter, you can only make measurements at the rate that you can perceive numbers on a screen. An oscilloscope like Aeroscope makes voltage measurements at 500 million times per second which gives you insight into what is happening at time scales much smaller than humans can perceive. With today’s high speed electronics, this insight is often essential to figuring out what is wrong with a circuit.

Q: Why is analog bandwidth important?

A: In addition to sample rate, analog bandwidth is a key spec for oscilloscopes. Technically, it is the maximum frequency sine wave the scope can capture. With today’s high speed electronics and digital signals, analog bandwidth is more important than ever for general signal accuracy. Square waves (like digital signals) are made up of many harmonics (or multiples) of the fundamental frequency. A rule of thumb for accurately measuring a square wave is to capture frequencies up to the fifth harmonic. So, with Aeroscope’s 100 MHz bandwidth, you can accurately measure square waves up to 20 MHz.

A: Aeroscope is a single channel oscilloscope. We plan to add support for a second channel in June 2017. This feature will allow you to sync two Aeroscopes together with a special USB sync cable. Once synced, this will give you two time-synchronized channels at 500 MSPS each. Aeroscope ships with hardware support for this feature, but some software work remains. This feature will be enabled with an over-the-air firmware update.

A: Yes! We have made Aeroscope attractive for professionals while still making it easy to use. Our app’s interface and touch screen gestures are intuitive for today’s smartphone generation. Imagine how useful it could be for a class to view an instructor’s oscilloscope on a large display during a lecture. Also, since the interface is an open source app, custom versions can be written to specifically target an educational audience.

Jonathan Ward
Jonathan Ward has always had a passion for measurement tools and equipment. He started his career at Agilent Technologies (now Keysight) designing high-performance spectrum analyzers. Most recently, Jonathan has developed high-volume consumer electronics and portable chemical analysis equipment in the San Francisco Bay Area. In addition to his decade of industry experience, he holds a MS in electrical engineering from Columbia University and a BSEE from Case Western Reserve University.

Alexander Lee
Alexander has been working in the industrial and consumer electronics industries for the past ten years. He has a BS in electrical engineering from Cal Poly San Luis Obispo and a MSEE from Colorado State University. He began his career at Agilent Technologies (now Keysight) as a production engineer for spectrum analyzers. He has been a key member of many product development teams ranging from high volume consumer electronics to high-end test and measurement equipment and one-off precision instruments for satellite operation. Alexander spends his free time with his wife and two dogs or climbing rocks in the Colorado front range. 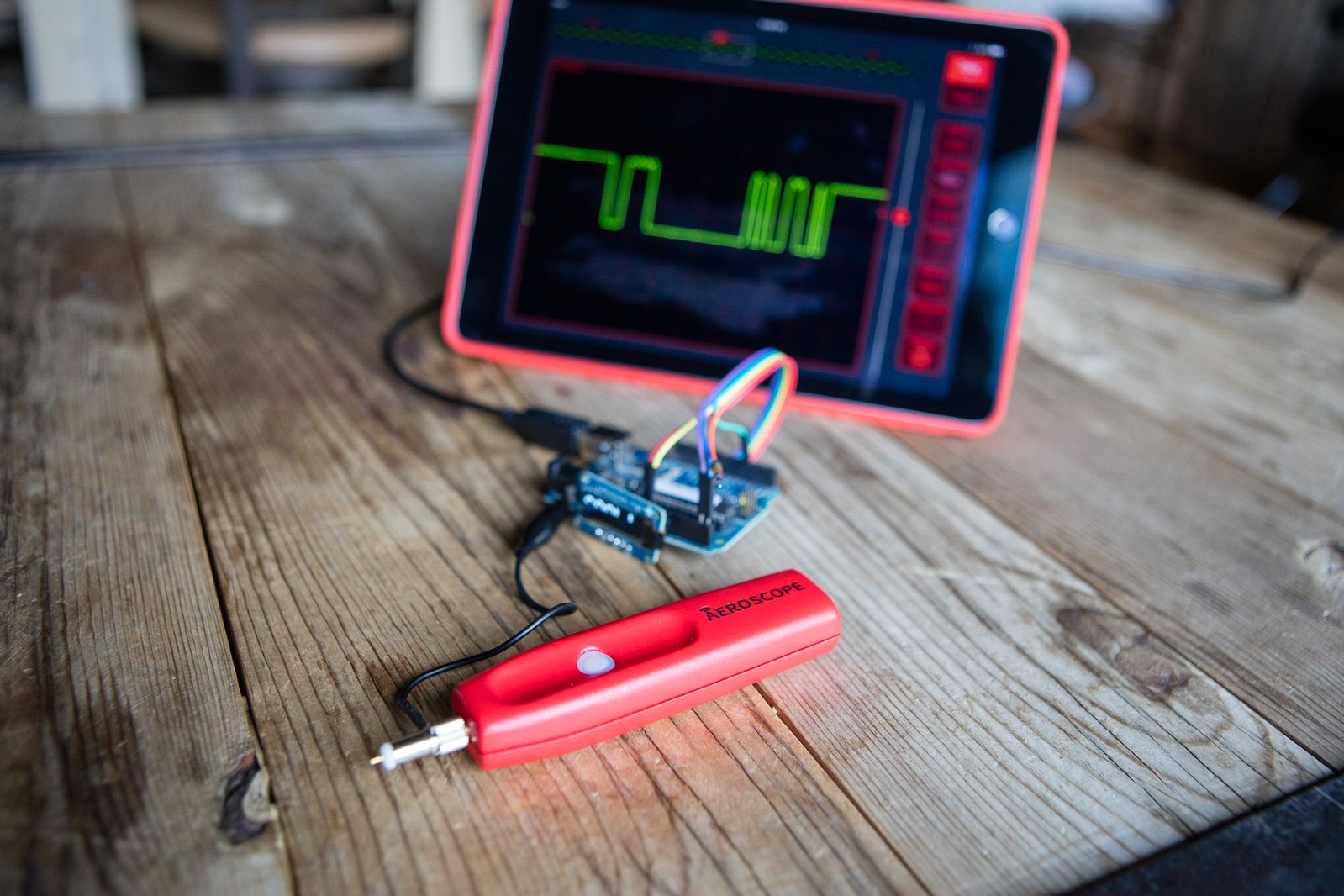 "It’s also extremely portable, so it appears to be ideal to take measurements on the field."

"The specs for the Aeroscope are about equal to the quite capable ‘My First Oscilloscope’ Rigol DS1052E."

"The ability to setup a measurement and easily monitor the data in another room while I’m working on something else is very useful."

"...it's easy to use. The app lets you adjust screen setting either by using pinch gestures or by tapping icons."

"a wireless, portable tool that lets you debug circuits like a pro." 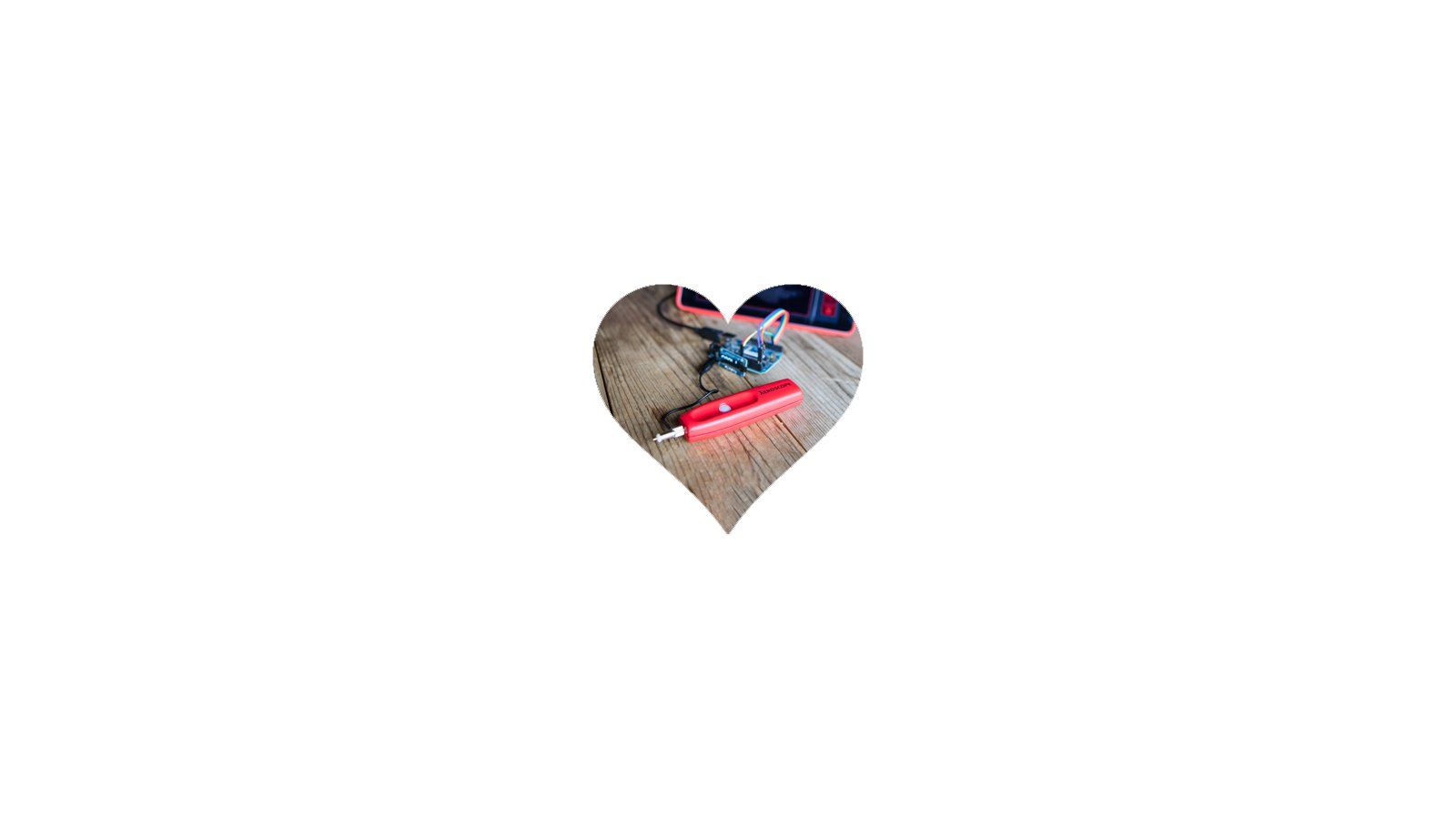 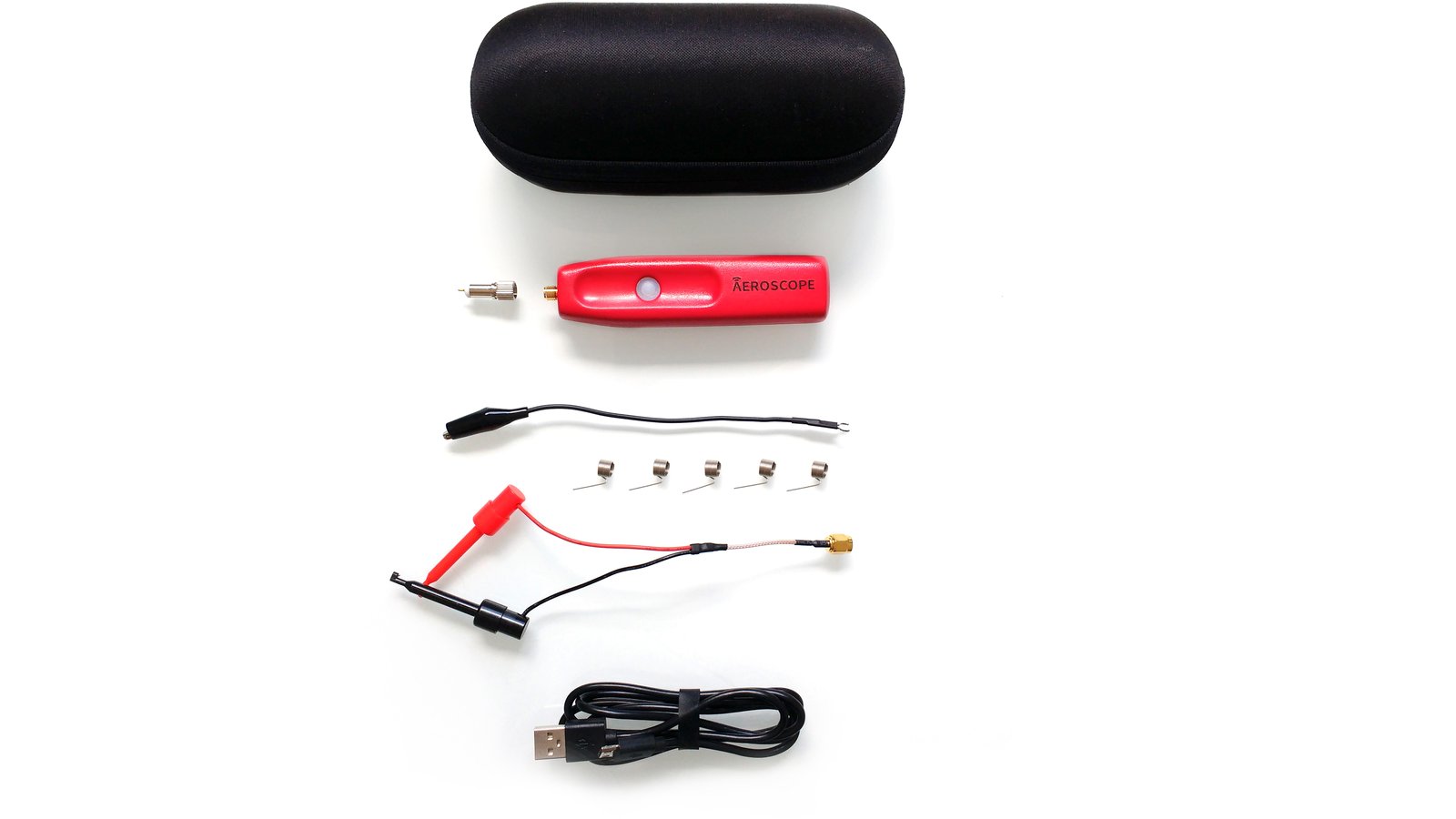 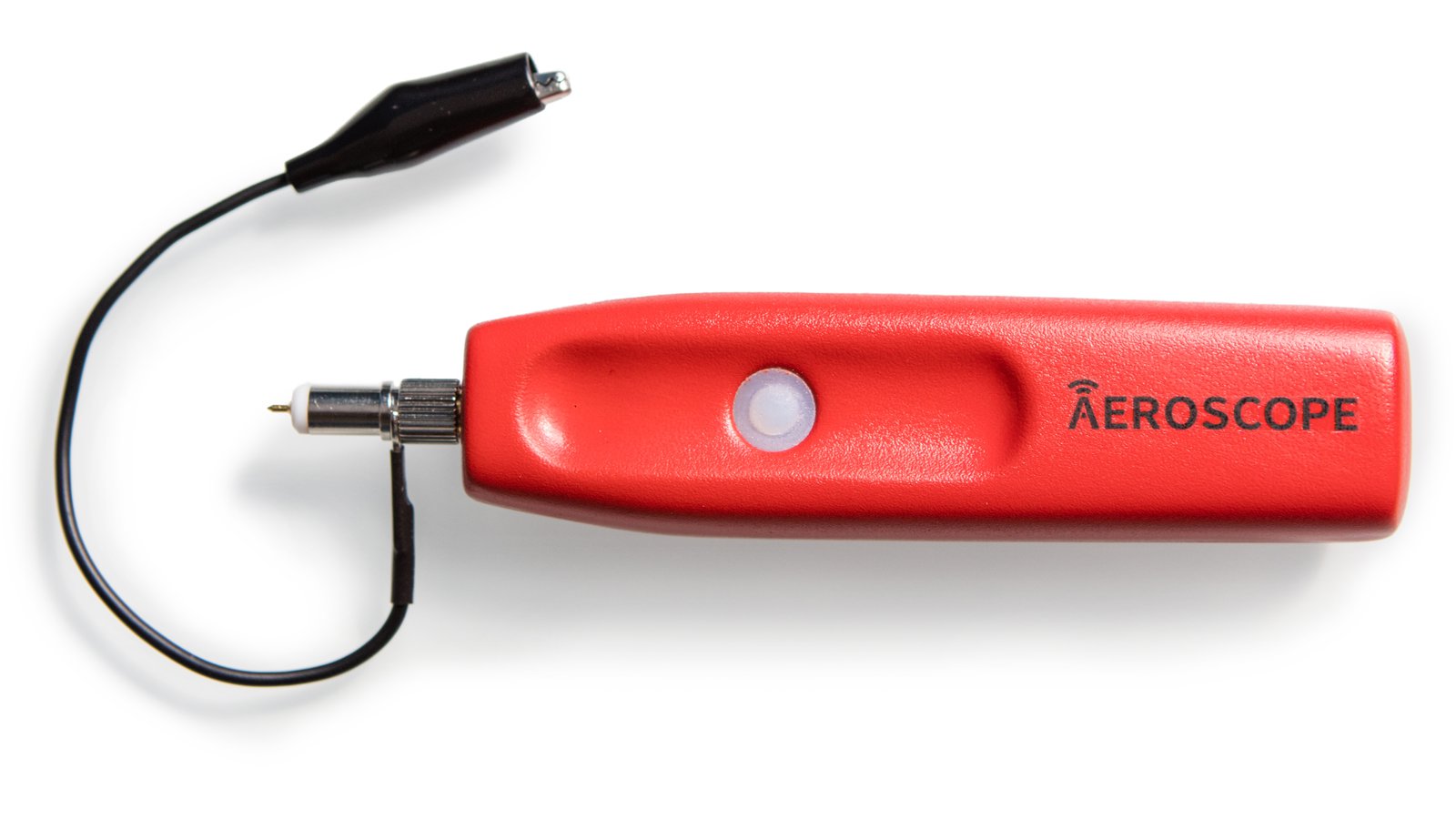 Get your Aeroscope at this campaign only price - Aeroscope will eventually retail for $359 USD. 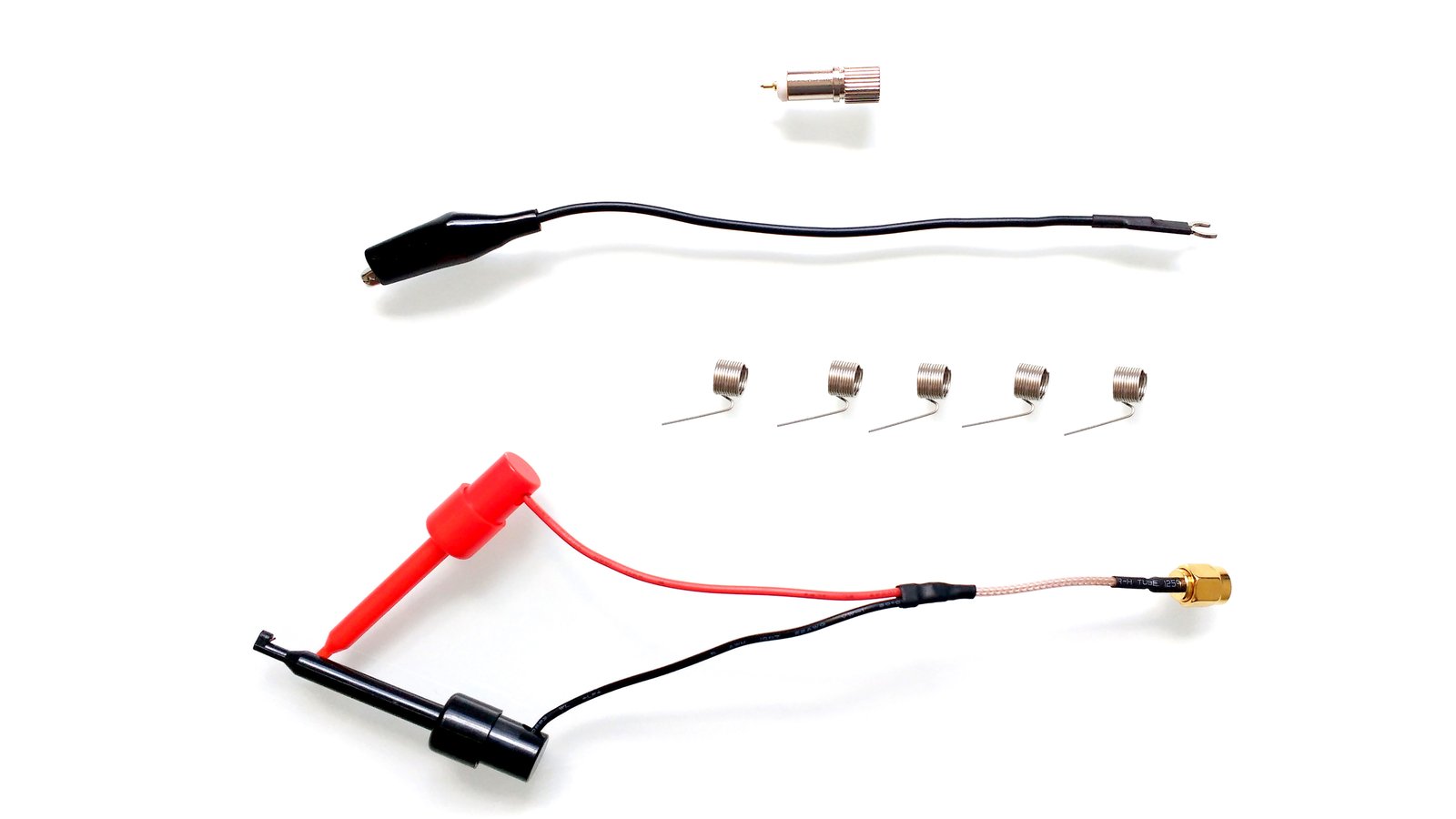 All the accessories you need to go with your Aeroscope. Includes the minigrabber cable, probe tip, ground clip and 5 high-speed ground leads. 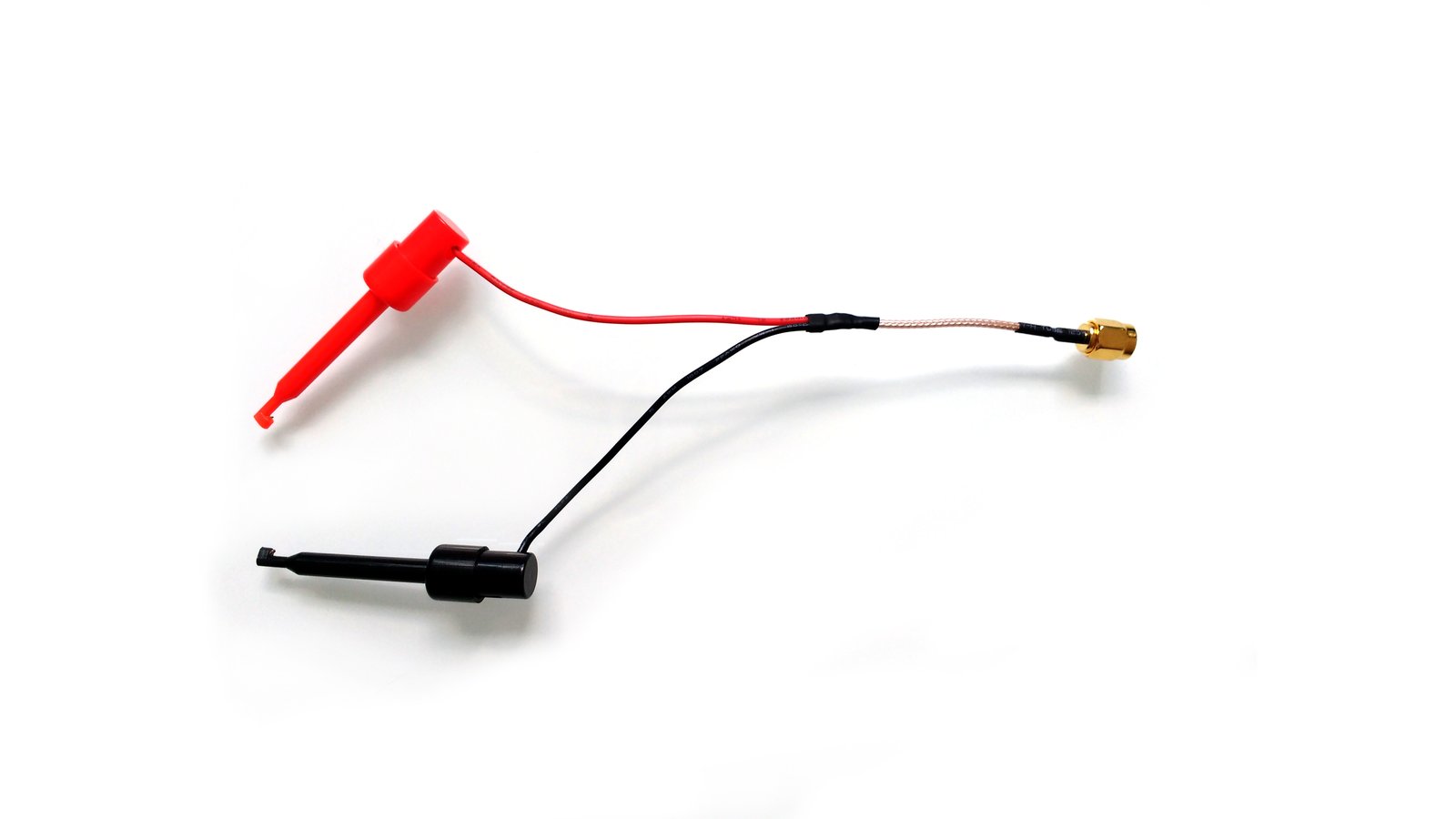 International shipping fee is waived with purchase of Aeroscope unit. 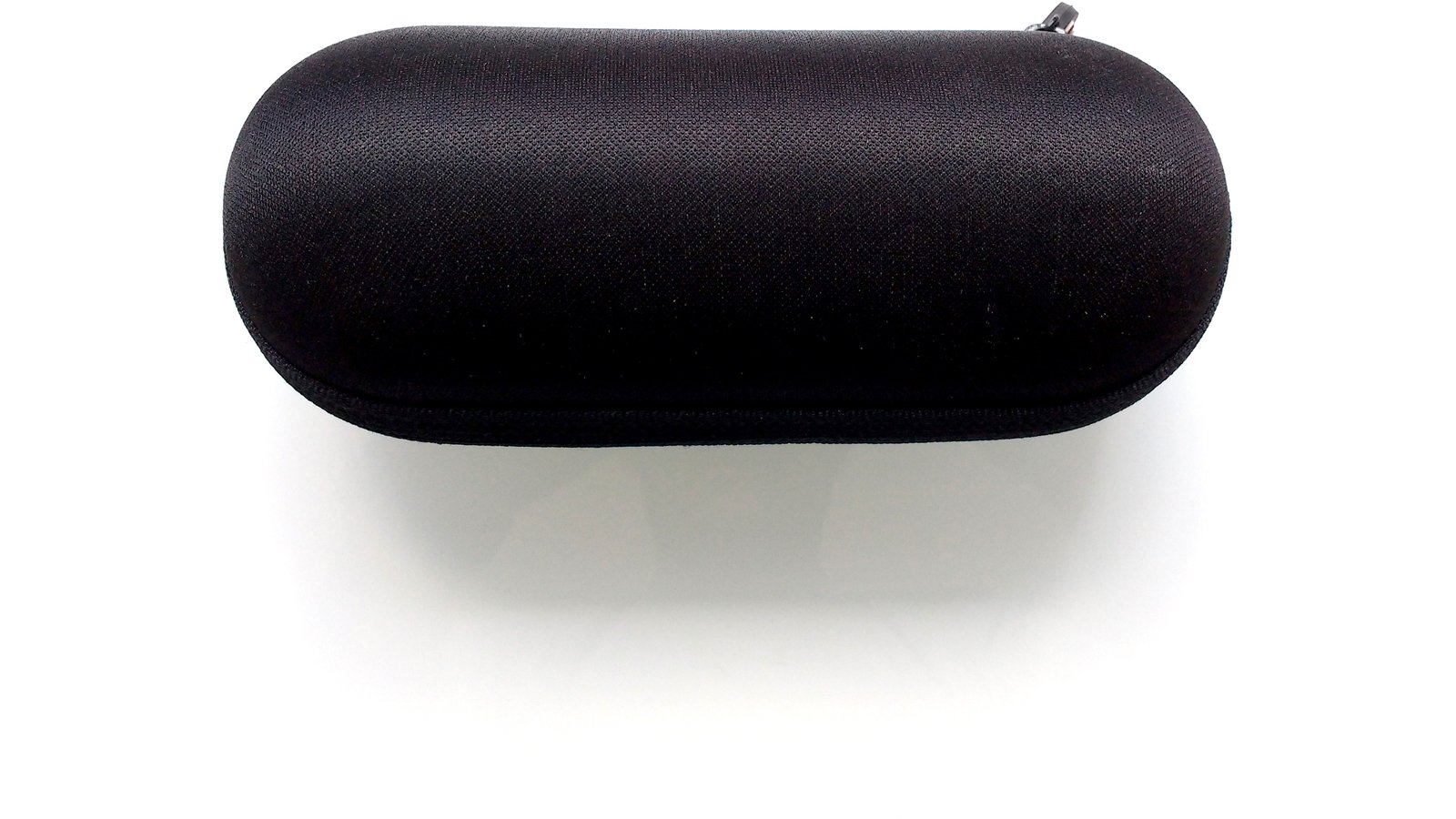 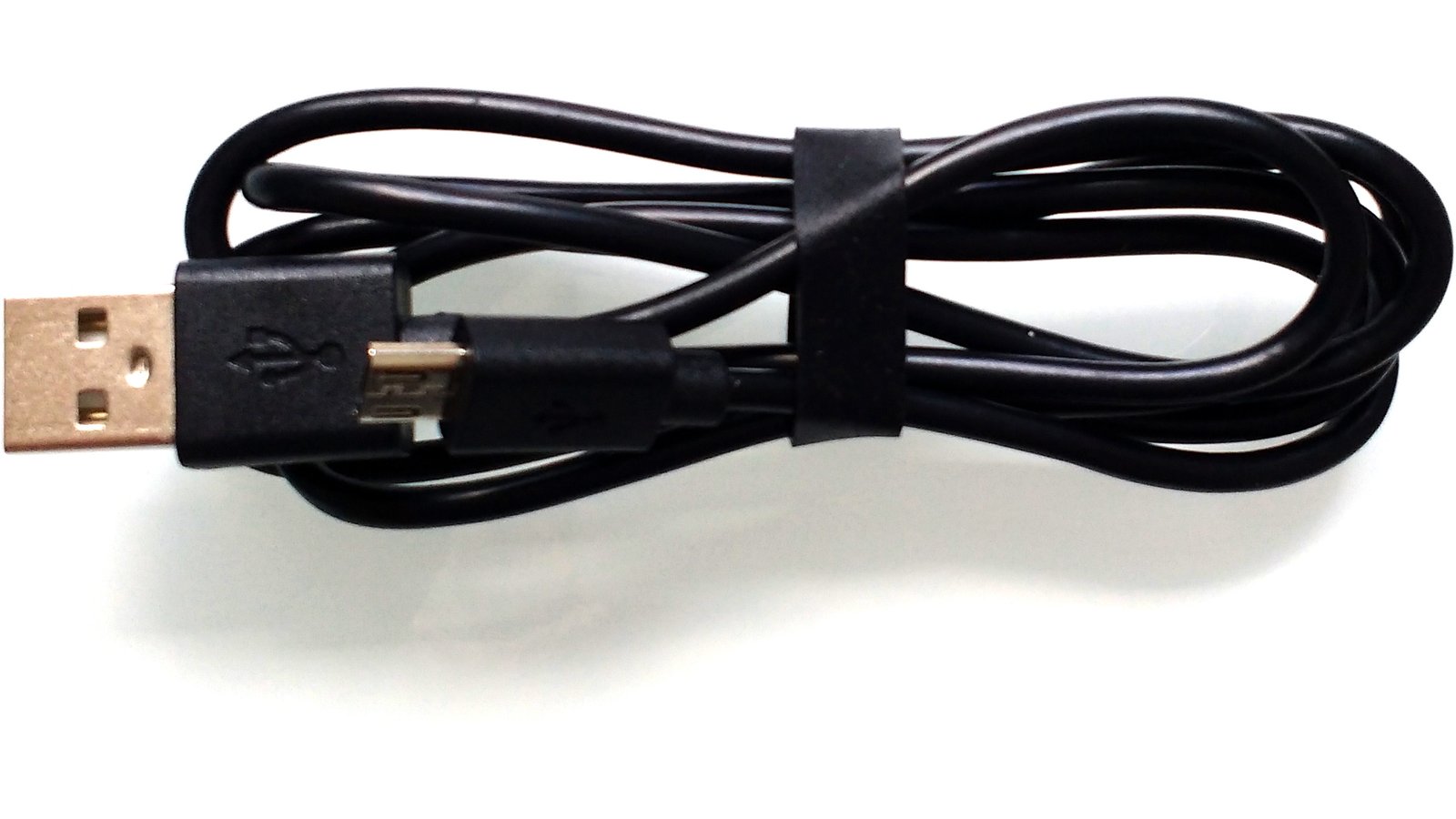 Get your Aeroscope at this campaign only, Early Bird price - Aeroscope will eventually retail for $359 USD. Only 25 available. 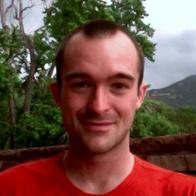 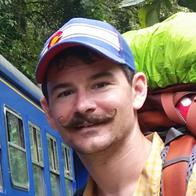 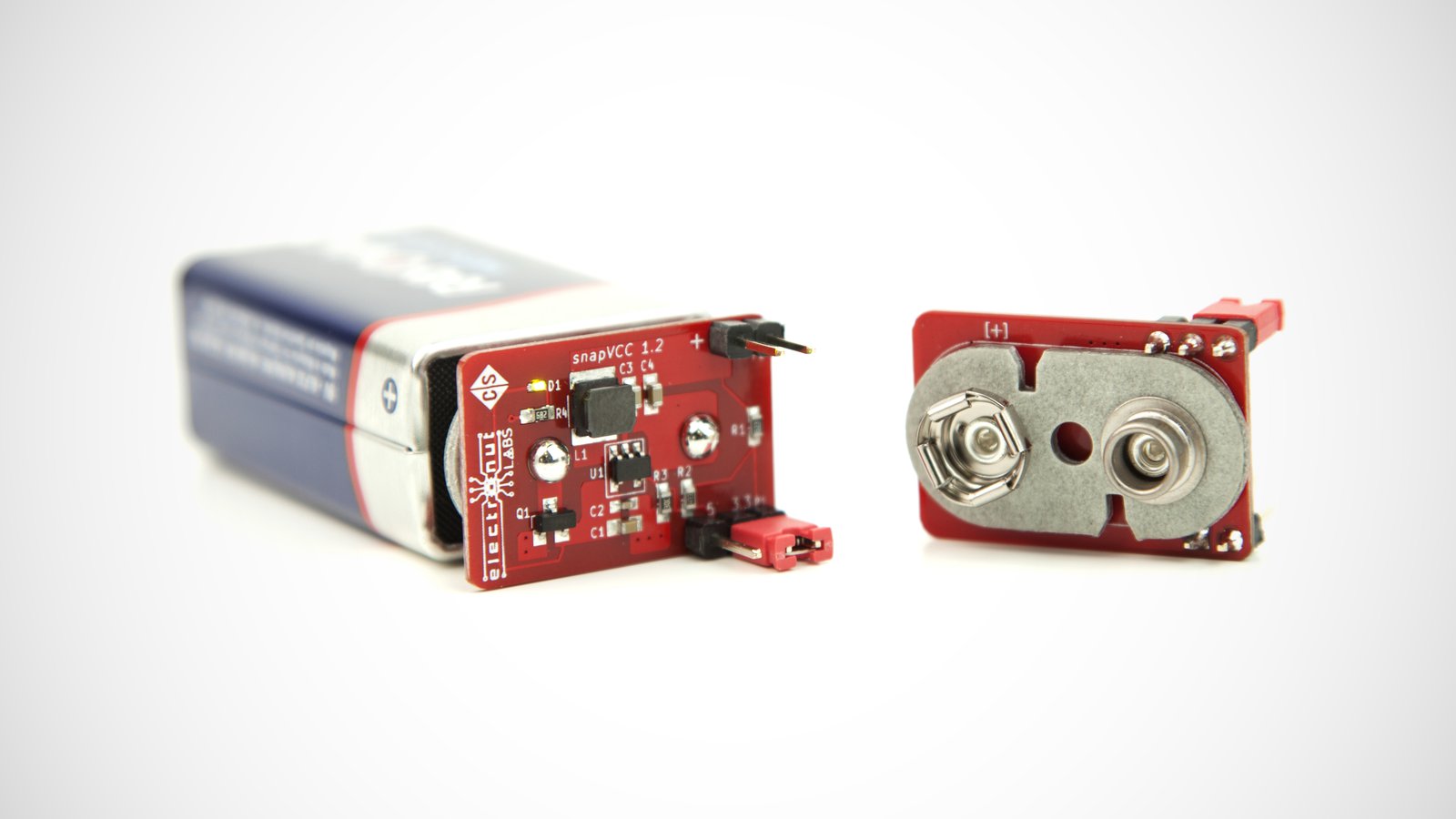 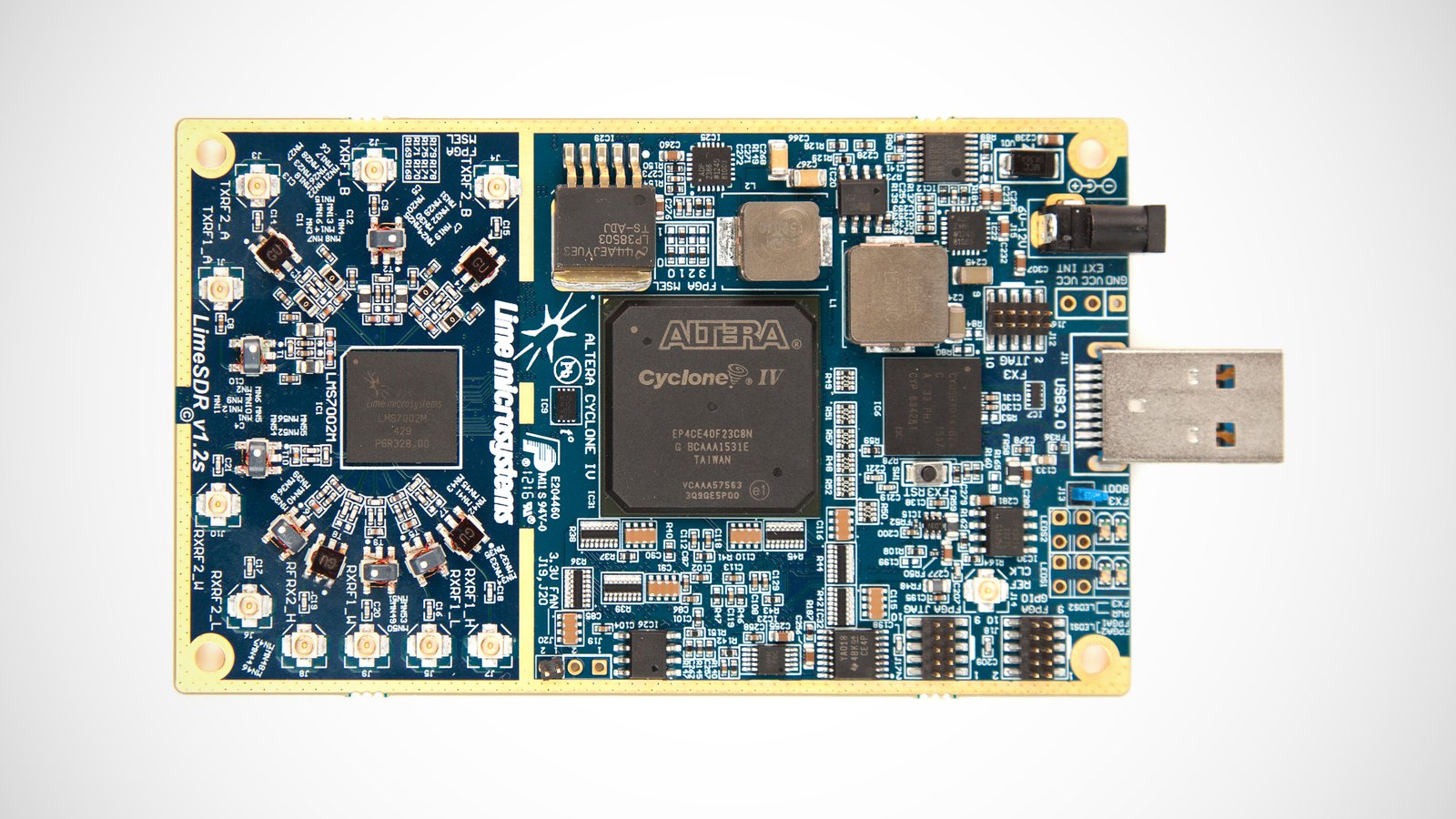