"... if you plan to use it outdoor... you need to protect your hardware from rain and dust."

"Hornbill boards will be able to run a Hornbill IO stack for cloud connectivity built on Amazon’s AWS IoT platform."

"Ready to go from idea to prototype to something presentable in no time? You may want to check out this ESP32-based kit on Crowd Supply!"

"A very easy and inexpensive way to get into the ESP32 ecosystem."

Hornbill is a development platform for the Internet of Things. It’s a set of hardware tools, firmware, and templates for local and cloud-based apps for controlling your project. It’s for makers, engineers, and small companies who want to build secure and robust network-connected things at a fraction of the cost of other platforms.

The core objective of the Hornbill project is to develop tools that are open, reliable, and consistently supported and expanded over time. We believe the real value in connected things lies in use cases that provide real insights, that help conserve resources, and that reduce costs.

The aim is not to build yet another IoT platform, but to use the best of open tools to help you build a solution, the way current web technologies work. 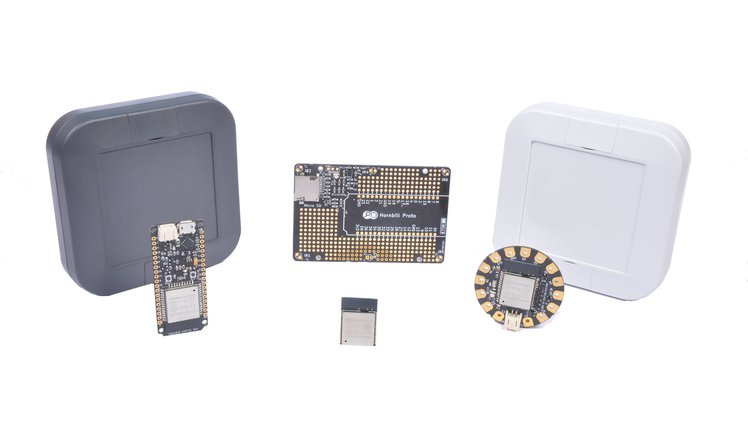 Hornbill hardware empowers you to build better prototypes. It is a complete suite of hardware options from dev boards to an IP67 waterproof/dust-proof enclosure. Hornbill hardware was built to serve our prototyping needs, so we are confident it will serve you well. It’s time to get rid of loose wires, double-sided tape, and tin cans! 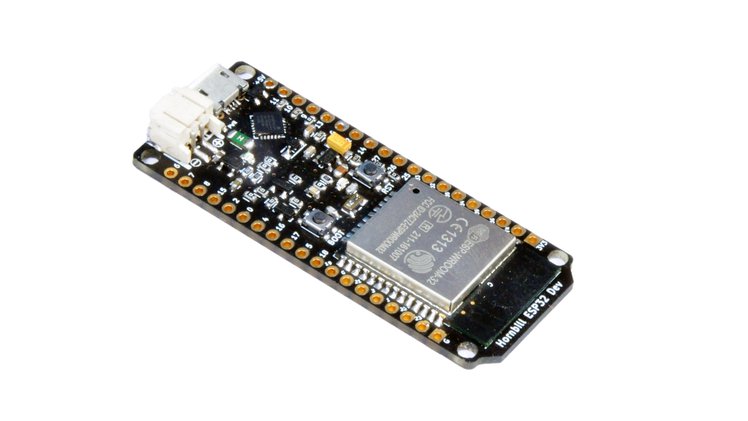 Hornbill ESP32 dev is breadboard-friendly dev board with tons of features. You can build your next connected thing with just this one board. 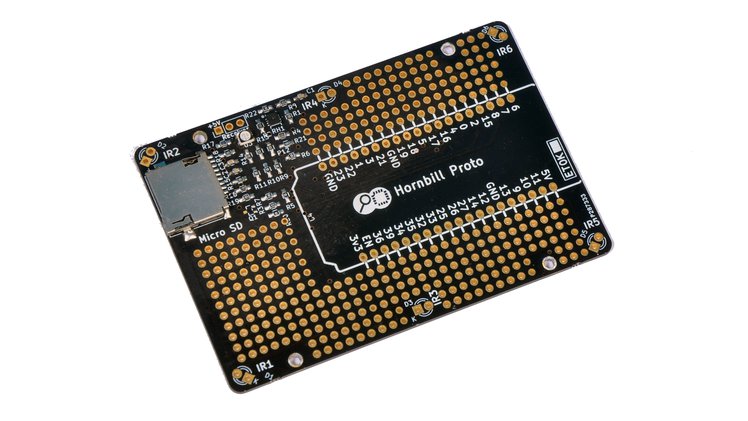 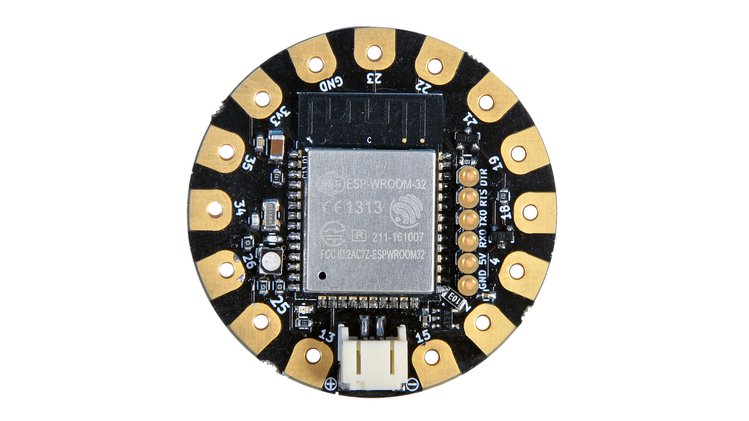 We want your prototypes and maker projects to look much better than tin cans and crudely 3D-printed cases. Hornbill brings you a rugged water proof, dust proof IP67 compliant case. The Hornbill dev and proto boards are designed to work well with this case. You can further machine and label the case depending on your needs. 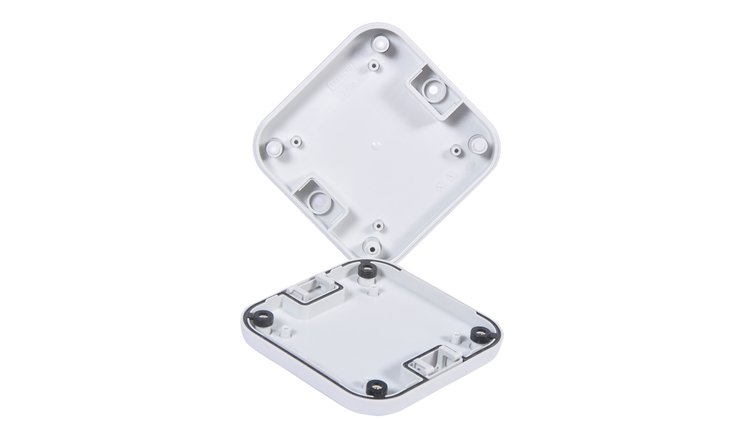 Awesome Things We Have Built With Hornbill

Hornbill OUR (Open Universal Remote) is a Bluetooth (BLE), Infrared (IR) bridge that can control all the IR devices in your home with a smartphone app. It is a single chip solution that uses Hornbill’s built-in Bluetooth and remote peripherals. It’s an excellent demonstration of what’s possible with Hornbill. Learn more about the project at its github repo 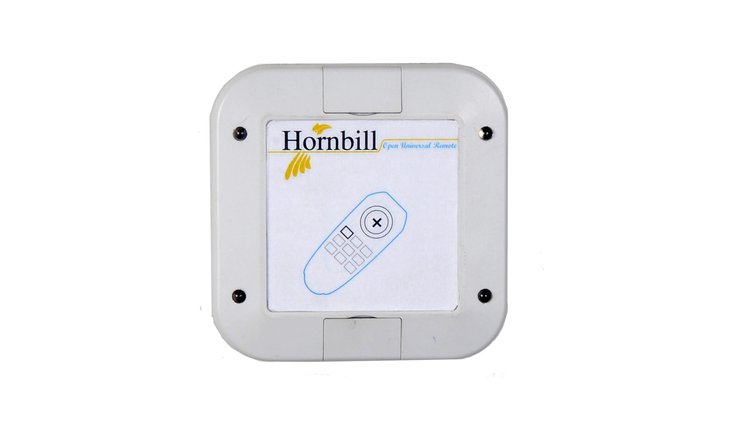 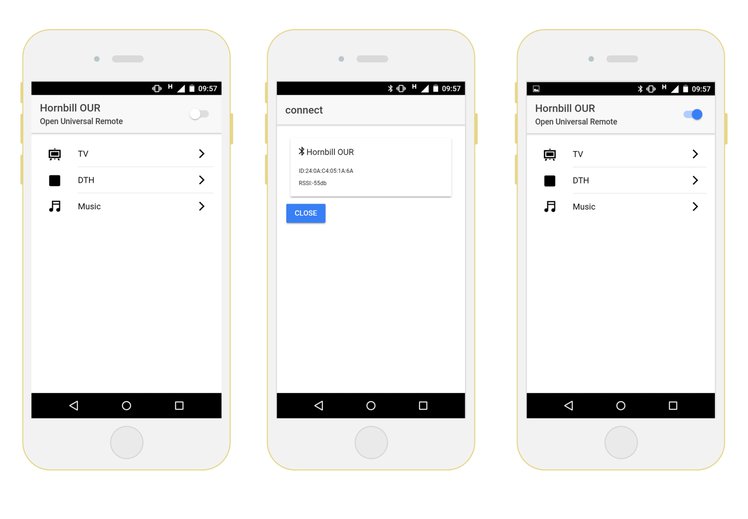 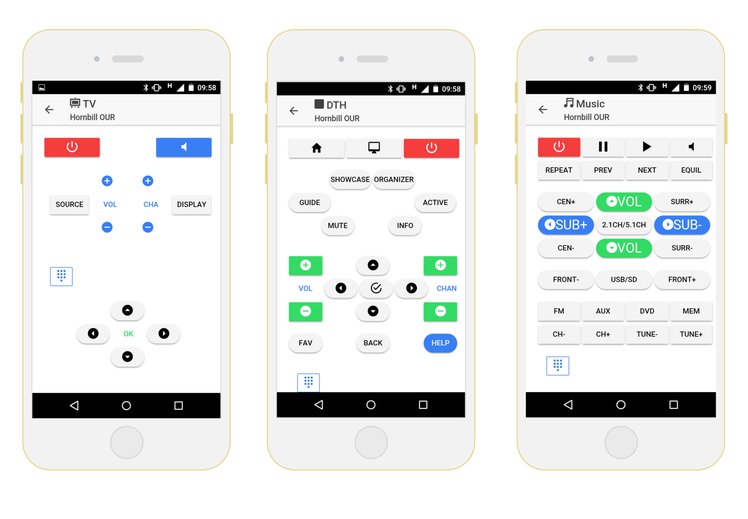 Build your own Hornbill OUR with this kit that includes:

To use the kit, just connect a 5 V standard USB charger and you’re ready to go!

Hornbill lights helps you create great ambience with addressable RGB LED lights. Hornbill Lights can be controlled via Bluetooth using a smartphone app. It allows you to repeatedly play random light effects or set a solid color that matches your mood! Visit the project’s Github repo for details. 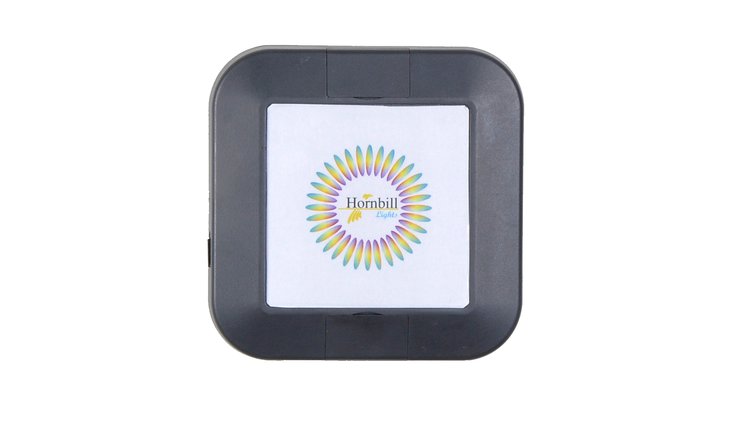 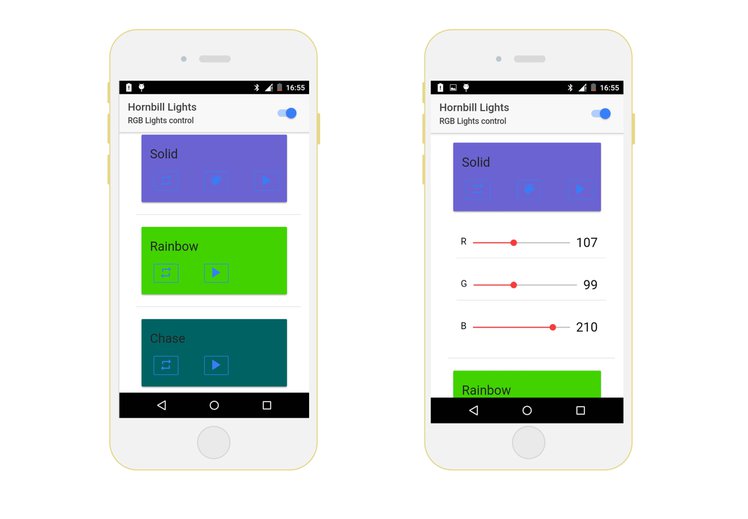 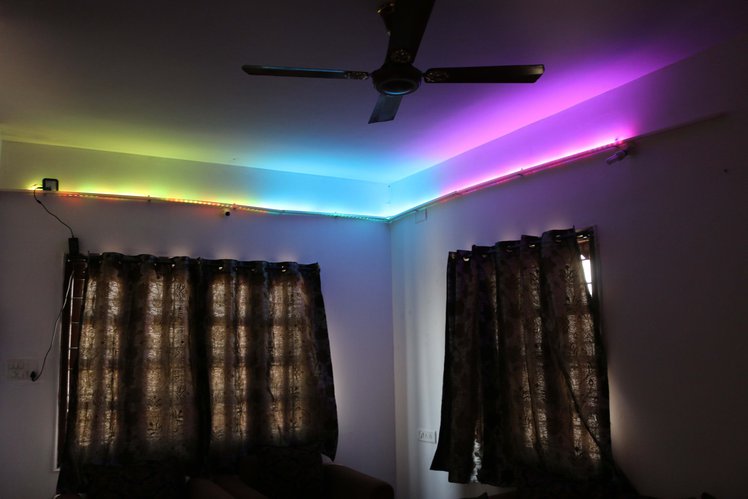 Build your own Hornbill Lights module with this kit: 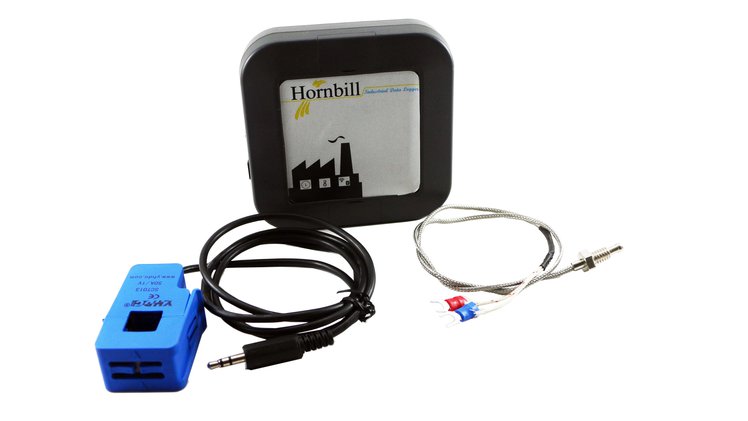 Construct your own Hornbill IDL with this kit:

The Hornbill Maker kit includes the essential components needed to make and hack with Hornbill ESP32. Over the campaign, we will be demonstrating several examples using the kit which will help you get started with Arduino and bare-metal. 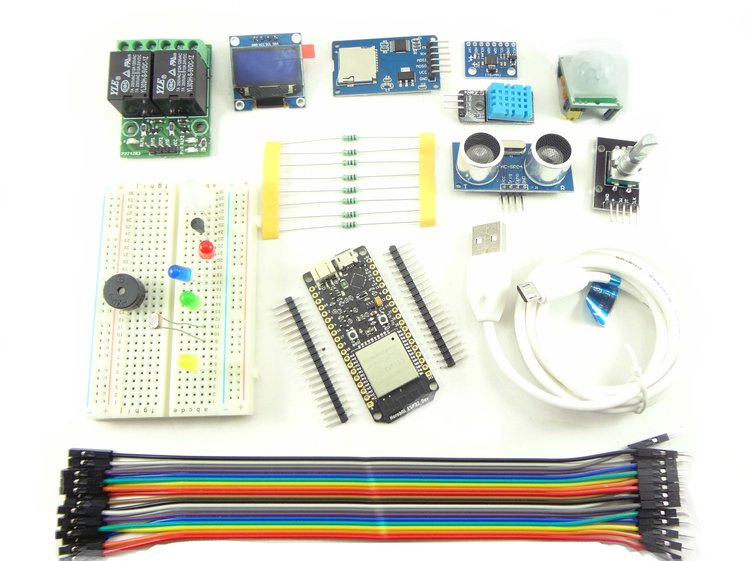 What Will You Make? 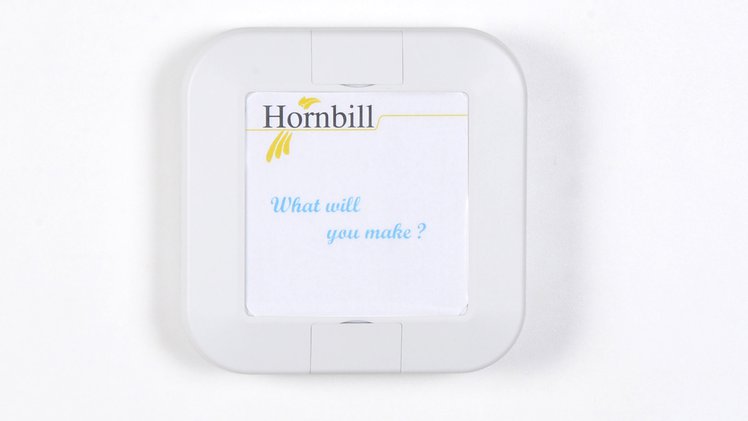 Looking for consulting and custom PCB designs based on Hornbill? Get in touch!

We will be publishing cross-platform apps for Android and iOS. These are being built with Ionic Cardova. They will be released as open source. So go ahead and fork them and build your own custom app!

Hornbill IO is built on AWS IoT. AWS IoT mandates use of Transport Layer Security (TLS 1.2) which enables end to end encryption of the data. Hornbill IO can be used to evaluate the cloud needs for your application. The work done for Hornbill IO will be released as open source, which will enable you to host applications with your custom domain. Hobby and maker projects can securely use Hornbill IO without the fear of connecting un-encrypted devices to cloud.

Each device purchased during the campaign will get 10K of free messages per year.

If the funding level reaches $10,000 during the crowdfunding campaign, we will build an app for Android and iOS. The hornbill IO app will include the ability to add widgets like buttons, slides, gauges, graphs etc., to make custom dashboards. Read more about the goal in this project update.

We have pre-ordered the major parts for the first batch of 100 boards. We also plan to order the next batch of parts during the campaign. So, we should be able to ship the pledges within schedule.

The dev boards have gone through several iterations, we do not foresee any major challenges in manufacturing and shipping the hardware. However, a ton of effort is needed in the firmware, libraries and apps. We believe with your support our dedicated engineers will make this happen. 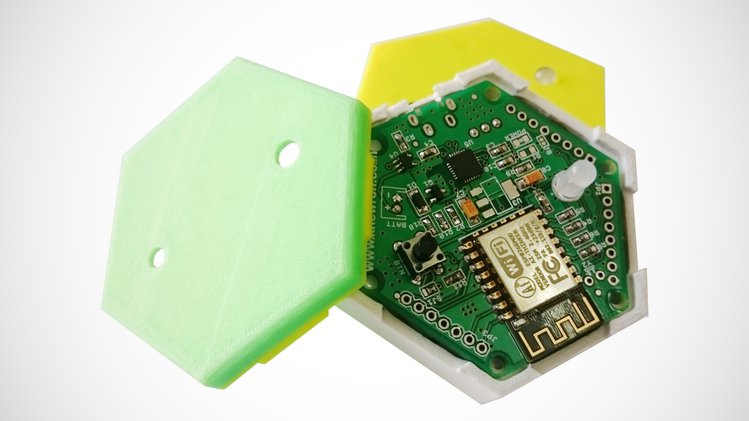