All Bikes Have Shipped!

Hello Asylum Backers, Weve just finished building and shipping all of the Asylums ordered during the Crowd Supply period. Hallelujah! From Rhode Island to North Carolina, to Oregon and Washington all the way to the Bay Area and Australia, people are getting about on the Asylum Meuse. Though the Cyclocross season is just now finishing and winter is fast approaching, theres a whole slew of gravel... Read the full update.

This past weekend, Asylum Cycles lit the Oregon Cyclocross State Championships on fire. The Asylum Meuse took one state championship title and two second place finishes. Not bad for an upstart bike brand, eh? The State Champs course was 1.7 miles long with a challenging with a steep climb, bumpy grass, and lots of mud each lap. Sean Carline rode an Asylum Meuse to its very first championship i... Read the full update.

Hello Asylum backers. The time has come. We are shipping bikes. Since receiving our initial batch of frames, weve been busy with quality control and assembling our complete builds. Our initial bike builds took longer than subsequent ones because we had to hone in precise assembly measurements. Each bike frame size has different cable and housing measurements. Once we had built up a full size... Read the full update.

Hello Asylum backers, Happy Friday, we have some great news. We received our first batch of frames yesterday afternoon. In a fit of joy, box cutters were brandished and cardboard began flying all over our warehouse as we began inspecting this long-awaited product. The quality is outstanding. Take a look for yourself. Initial frames passed QC with flying colors. We inspected a 58cm and 52.5 ... Read the full update.

Frames on the way!

Hello Asylum backers. Your frames are finally ON THE WAY from Taiwan! Well receive them this week and share an update as soon as weve cracked open the first box. Thank you for your patience. Stay tuned for more! Best, Patrick w/Asylum Read the full update.

This week I managed to get our prototype nice and dirty at the 2013 Battle at Barlow. Each year, Barlow marks the official beginning of the traditional cyclocross season in Oregon. Those of you in the Northwest are aware that last weekend hurricane-like conditions. I dont believe it stopped raining for more than 10 minutes at a time. And when it rained, it poured. By the time I raced, the ra... Read the full update.

Hello Asylum backers, We have received word from our finishing facility in Taiwan that our bikes should ship to Portland on October 12th. We are airfreighting our initial batch of orders (Crowd Supply and Pre-orders included) so it shouldnt take too long for them to reach us in Oregon. Its likely that the bikes will sit in US Customs for a few days. Luckily, our warehouse and assembly facility ... Read the full update.

Hello Asylum Meuse backers. Were getting closer by the week to our first delivery of Frames in October. We just began bringing in our OE part orders for all of the build kits as well as setting aside space in our warehouse for product assembly. We received some pictures of our first production frames, and everything is coming together nicely. Were really impressed by the increased clearance at ... Read the full update.

Hello Asylum backers. We have some exciting news. Our first batch of production prototypes (a size 52.5 and 58) just passed their engineering tests and have been shipped to our finishing facility in Taiwan. Well be sharing some photos of them once we get them painted. Theses two frames will have our production graphics in place as well as the revised seat stays with increased mud clearance. Sta... Read the full update.

Getting Ready for Next Season

Hello everyone, I wanted to share some great tech articles I came across on Cyclocross Magazine recently. First up is a piece on the wheel manufacturer weve selected for our stock builds NoTubesand how theyre leading the charge on tubeless disc-compatible wheelsets in cyclocross. Next, heres a look at proper maintenance techniques and some general information on disc brakes in Cyclocross. Enjoy... Read the full update.

Its all over, and thanks to your help the Asylum Meuse was an absolute success. Not only did we meet the campaign goal, but we exceeded it by about $30k. In the closing week of the campaign, we sold 15 bikes. Thats right, 15 bikes! This was quite the accomplishment. We could not have done this without your help. A big thank you to all of our backers. The final count? With 150 pledges, we raised... Read the full update.

Weve made it to the last day of the campaign. I cant believe that the first chapter of our journey is nearly complete. Thank you to everyone whos shared the journey with us so far. Throughout this project, weve learned a lot about what people are looking for in their next bike, how to crowdfund a new company, and we met a lot of interesting people in the process. Thank you for your enthusiasm f... Read the full update.

As youre probably aware, we made it. With your support, enthusiasm, and financial backing, the Asylum Meuse became a reality as we exceeded our crowdfunding target. So, whats next? First of all, there are still 5 days left in the campaign. That means that people still have the ability to get a Meuse at the special, crowdfunding campaign price. The more we overfund the, the better-equipped Asylu... Read the full update.

One bike to go!

As of writing this post, we only need one more person to back a complete Meuse to reach our funding target. Be it a single-speed, a geared edition, or our Team Rogue, any one of these will tip us over the edge. We couldnt have gotten here without you. Help spread the word and bring us over the line! $1,010.00 remaining. We can do this! very best, Patrick w/Asylum Read the full update.

Asylum needs your help in the final week and a half

As testament to the Meuses exceptional value during the crowdfunding period, we wanted to share what a backer recently posted on Facebook: I had been looking at comparable bikes for awhile now, and you cannot get anything close to what the Meuse has to offer, as far as components, let alone a carbon frame. Other bikes at this price point offer an aluminum frame with inferior groups. I cant wait... Read the full update.

The Meuse continues to impress. Weve just hit the 85% funded mark. Thank you to all of our spectacular backers. Were also receiving a fair amount of press. Joe Parkin, a legend in his own right, did a nice write-up on our Asylum Meuse Rogue edition on the Paved Magazine website. On Monday, Frank Peters of CDM Cyclist, featured an interview with the Meuses product manager, Patrick Croasdaile. I... Read the full update.

Full Steam Ahead Things are really moving at full speed now. Were over 70% funded and we couldnt have done it without your support. We just got back from Sea Otter where we had the pleasure of showing the Meuse off to the American bicycling public at large. In addition to racing it, our man Dan got the Meuse in front of a lot of people, and even had some time to hit the trails. By and large ... Read the full update.

We sent one of our team members, Dan, down to Sea Otter to show off the Meuse, race it, and get people to try it out. By all accounts, the Meuse is making an impression with the locals Stay tuned for more from Dan the Man at Sea Otter. Read the full update.

Following A Successful Campaign, Prices Increase After May 18th With just under a month to go, the Asylum Meuse comes closer to reality by the day. Thats why we want to give you an idea of how prices will increase if the project is funded by the time the campaign ends on May 18th. You should take advantage of this moment to get our project rolling faster and get the best deal on your next Cyclo... Read the full update.

Introducing the Meuse to Rogue

Yesterday was a big day for Asylum Cycles. We unveiled the Meuse, in all of its glory, to not only the public at large, but also Rogue Ales and their cycling team. And what better place to do it than the Rogue Ales Public House in the Pearl District? We made the most out of the opportunity. In addition to chatting with key-members of Rogues management, principally their CEO, we also got to tas... Read the full update.

We are proud to announce that the Meuse is over 50% funded. With 33 days to go, things are looking great! On Tuesday, the Asylum team will present its Team Rogue edition to the CEO of Rogue Ales and their cyclocross team at the Rogue Ales Public House in Portland. Pictures to follow. Stay tuned for more. Read the full update.

Riding the Meuse at the Rickreall Gravel Classic

Gravel grinding has become the new wave of adventure cycling in the Pacific Northwest. Nothing else quite unifies the various sub-cultures of cycling like a long day in the saddle on empty roads in the middle of nowhere. We designed the Meuse with exactly this kind of riding in mind. This past weekend, the Asylum crew went down south for the 1st annual Rickreall Gravel Classic, put on by the ... Read the full update.

Were happy to announce that we are now accepting orders internationally. From Australia to Finland, we have you covered. How does it work? Select the Asylum Meuse variant you want to fund and receive. Go through the required checkout process. Once that is completed, email us your shipping address. Well confirm the shipping price with you and have you make a general pledge to the campaign in the... Read the full update.

We just finalized the Rogue Team edition graphics, had it painted, built it up and added a picture of it to our Crowd Supply page. Take a look! Read the full update. 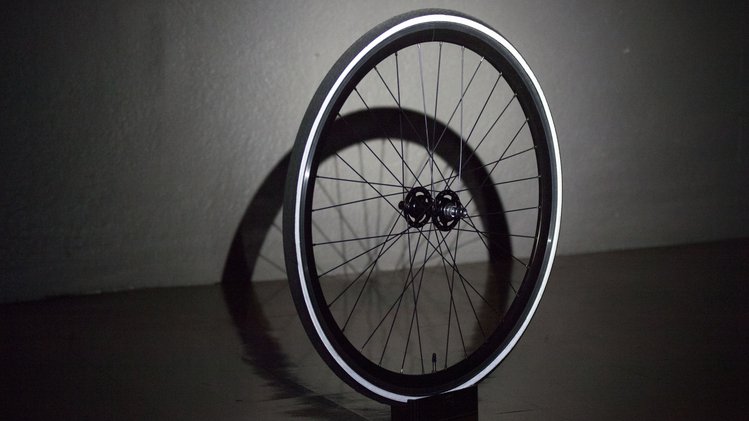