"The touchscreen convenience of the BB3 is further expanded by an...incremental encoder that can be used for functions that are traditionally performed with push buttons or rotating knobs (e.g. changing output parameters)."

EEZ Bench Box 3 (BB3) represents a new category of modular Test and Measurement (T&M) equipment. It provides a complete open-source hardware and software framework that bridges the gap between – and combines the best features of – DIY hobbyist tools and professional benchtop equipment. BB3 was inspired by the EEZ H24005 power supply, which attracted many enthusiasts with its broad feature-set, rich user interface, DIY-friendliness, and fully open-source design. BB3 will initially ship with modules that provide the same functionality as the H24005, but those modules will come slotted into a device that delivers improved modularity, greater capacity, more processing power, an easier-to-use interface, and enhanced flexibility, all in a compact form factor. 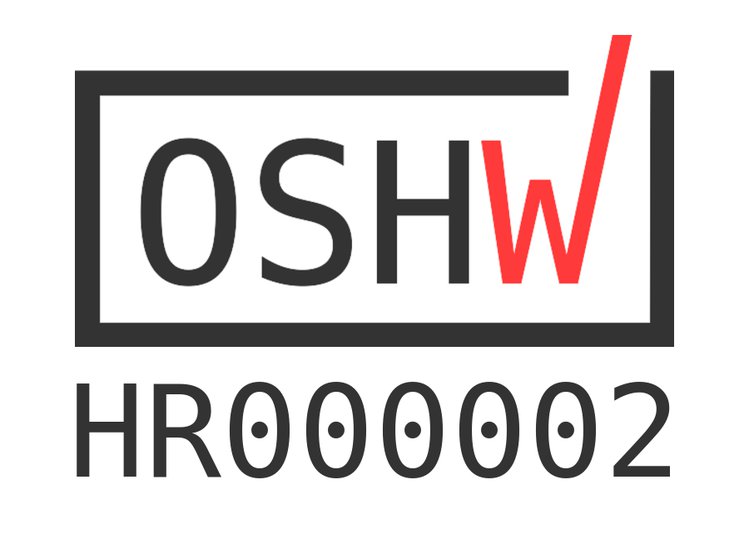 Modularity was a major concern when we designed EEZ BB3. Our goal was to house up to three modules in an enclosure that occupied the same benchtop area as the EEZ H24005. We also wanted to minimize the wire harness to simplify assembly and to ensure that all modules would be easily accessible.

Despite the initial expense, we believe this modular approach will pay off in the long-run. T&M equipment should not become obsolete overnight. It should continue doing its job for years, if not decades. At the same time, new components and solutions are introduced every day that have the potential to make existing equipment more powerful, more accurate, and easier to use. Modularity seemed to us like the best way to preserve our backers’ investments (and usage habits!) while giving BB3 room to grow. Our goal is to support incremental replacement of existing solutions so that our backers do not have to throw everything away and start over (or add to the towers of equipment stacked in their crowded workshops).

Most modular T&M equipment is built around some de facto industry standard backplane specification, such as VXI, PXI, or CompactPCI. We found them all expensive and overly complex, so we decided to make our own. We called it EEZ DIB (short for DIY Instrumentation Bus) and it fits our needs much better. DIB version 1.0 can be build on 2-layer PCB, offers three dedicated SPI channels and leaves room for future expansion, both electrically and mechanically, through the addition of new connectors and communication lines. 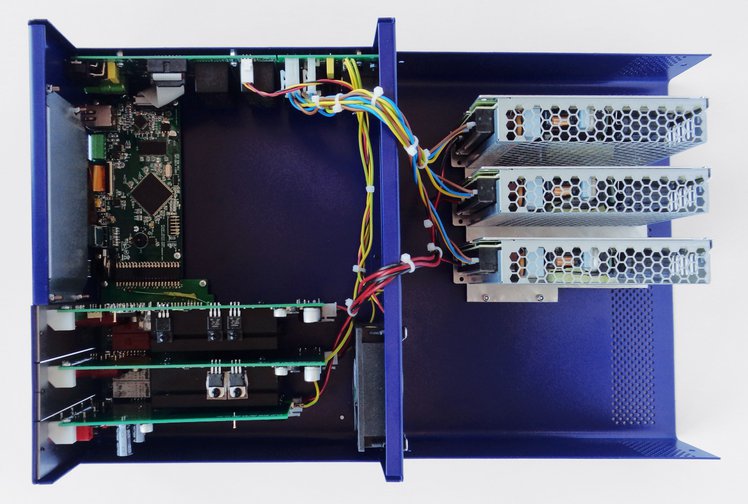 When configured as a multi-channel power source, EEZ BB3 provides several features that go well beyond those of most commercial power supplies. We’ve broken it all down below:

Three internal modules make up the core of EEZ BB3. The MCU module handles processing, the BP3C backplane module allows BB3 to communicates with peripheral modules, and the AUX-PS module provides +5 V and +12 V (up to 10 W each) for powering the MCU, the cooling fan, and any installed peripheral modules.

The MCU module carries all connectors that are exposed when opening the BB3 enclosure’s front panel. This includes a 40-pin "ZIF" (zero insertion force) connector used by the color TFT touchscreen display, which greatly simplifies removal of the display. ST’s ARM Cortex-M7 MCU is capable enough to render pictures smoothly while simultaneously taking care of up to three peripheral modules.

The BP3C backplane module can carry up to three EEZ DIB v1.0 peripheral modules. It is equipped with four power relays and supports coupling of power outputs in any of the ways shown below without the need for additional external wiring. 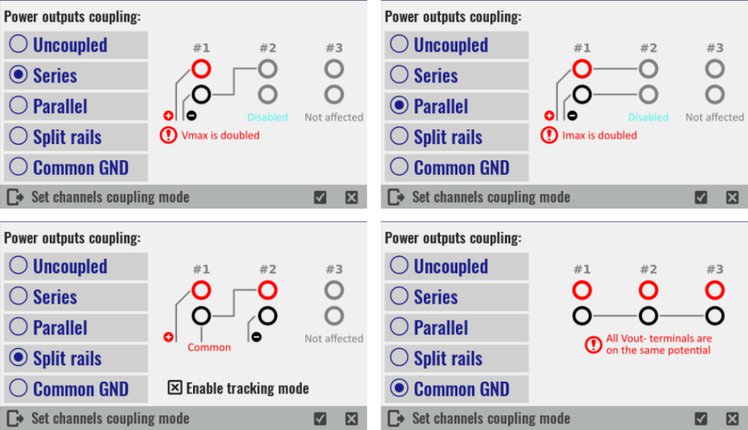 Coupling is performed strictly under firmware control, which helps avoid possible mistakes and allows programmed voltage and current to be reset to safe values before coupling. Additionally, when coupling in series or parallel, the firmware automatically accounts for new ranges (up to 80 V or 10 A) when setting and displaying output values. The backplane also handles RESET and BOOT0 control used to upgrade the firmware of MCUs on peripheral modules, by way of UART or SPI, without the need for additional connectivity to an in-circuit programmer.

The AUX-PS module is designed so as to minimize the wire harness. It is sized to be as wide as the enclosure itself so that it can expose the AC inlet (with two mains fuses) through the rear panel. The AC power switch, PE socket, and BOOT0 switch exposed through the front panel can also be mounted on the AUX-PS module without additional wiring. It includes AC soft-start ("standby") circuitry and AC input protection. It is also home to the cooling fan controller, which is programmable via the I²C bus.

EEZ BB3 can be equipped with up to three peripheral modules. Alongside the chassis itself, we are launching three DC source modules that are, we believe, sufficient to meet the needs of a broad audience.

The DCP405 can deliver up to 40 V and 5 A, with power limited to 155 W due to the capacity of the included AC/DC module. Two of these modules can be combined in series or in parallel thanks to their isolated ("floated") outputs. Their hybrid topology (switching pre-regulator and linear post-regulator stage) provides a good compromise between efficiency, output noise, and regulation speed and accuracy.

Our second peripheral module is the DCM220, a two channel module designed to complement the DCP405. Each channel is comprised of only one power stage (synchronous buck switcher) that can deliver up to 20 V and 4 A. Their power output grounds are connected together (since they share the same DC power input) but remain isolated from other modules. The characteristics of the DCM220 are modest compared to the DCP405, but its lower per-channel cost makes it attractive as an auxiliary power source. The DCM220 also comes with one feature that cannot be found on the DCP405: it has an on-board MCU that is "slaved" to the MCU module. Its internal ADCs are used for measuring, and a combination of its DAC and PWM outputs are used to set the channel’s voltage and current. It also provides a useful reference implementation for designers looking to develop a peripheral module with an on-board MCU.

All peripheral modules come with on-board EEPROM that is used to store calibration data, activity counters, module IDs, basic capabilities, and other such details. This allows modules to be moved between slots – or even between chassis – without needing to be re-calibrated or losing activity information.

EEZ BB3’s software has a rich feature-set that truly shines because of its openness. Our touchscreen GUI, for instance, was designed using the in-house, cross-platform EEZ Studio. As a result, our ability to create new widgets, expand content, add color themes, and fix bugs is subject only to available resources, never to the limitations of proprietary, third-party tools. We’ve done our best to make the BB3 GUI usable and attractive, and we’re counting on your support to help us make it even better, which is why we are accepting EEZ Studio Development contributions. 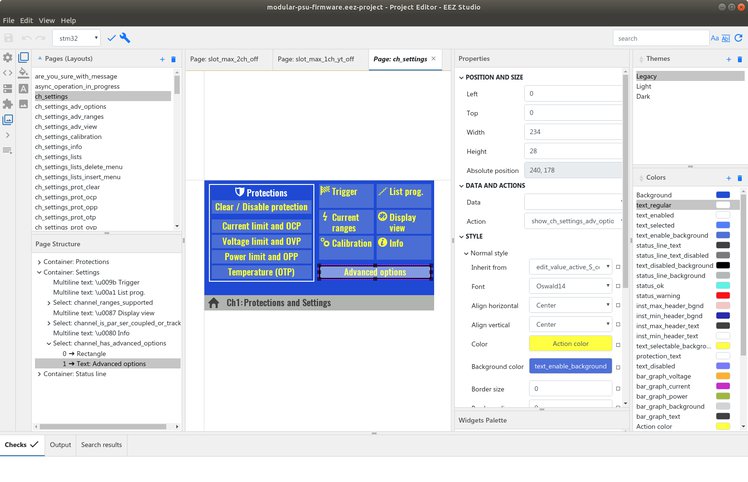 But EEZ Studio is not just a GUI development environment. It is also a full-featured SCPI controller, which means it can use SCPI commands to access remotely-controllable T&M equipment. If you find yourself surrounded by T&M instruments in your lab or workshop, why not put them to use gathering data in a structured manner? You can store the information you collect in a SQL database, organize it into sessions, search it by various criteria, visualize it as a heat map for easy access, or make use of it in some other way.

EEZ Studio communicates with T&M equipment via IEXT (Instrument EXTensions), which are based on Keysight’s XML structure. As a result, it is able to recognize most of the Keysight instruments that are listed in their Offline Command Expert command set. EEZ Studio also provides basic visualization, analysis, and data transfer tools. 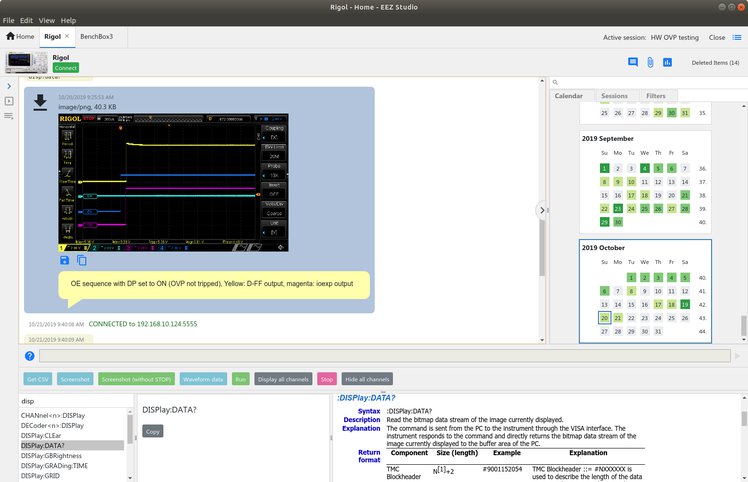 EEZ Studio currently supports serial, telnet over Ethernet, and USBTMC interfaces. We are looking to add support for IEEE-4888 (GPIB), in order to accessing device that only provide that interface, and VISA middleware.

Our firmware feature-set is based on the H24005 project, but thanks to the bigger display and a more capable MCU that can render content directly to the TFT display, we were able to add many new features, including anti-aliasing, a larger average font size, multiple color themes, and animated transitions between pages. (Don’t worry, you can turn it off if you find it distracting.)

Firmware features accessible through the touchscreen display are organized such that they require the minimum possible number of touches. A channel’s output values can be displayed in various ways to make them more readable from a distance. (When quick or repetitive changes are expected, for example, horizontal or vertical bars are often more informative than precise numbers).

The figures below should give you a sense of how you can configure settings through the GUI and of what the dark theme looks like. 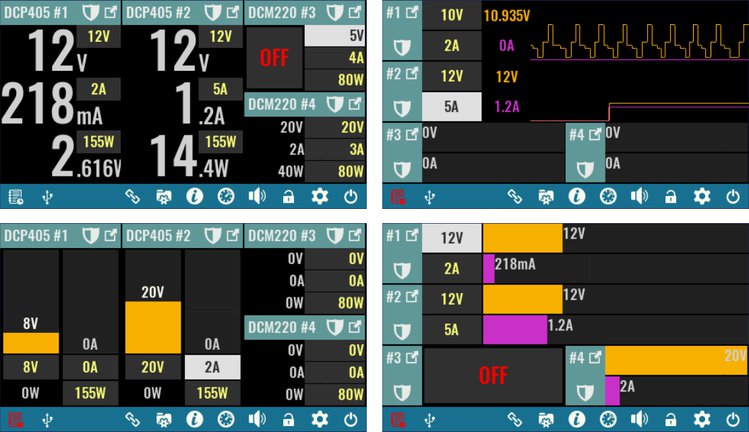 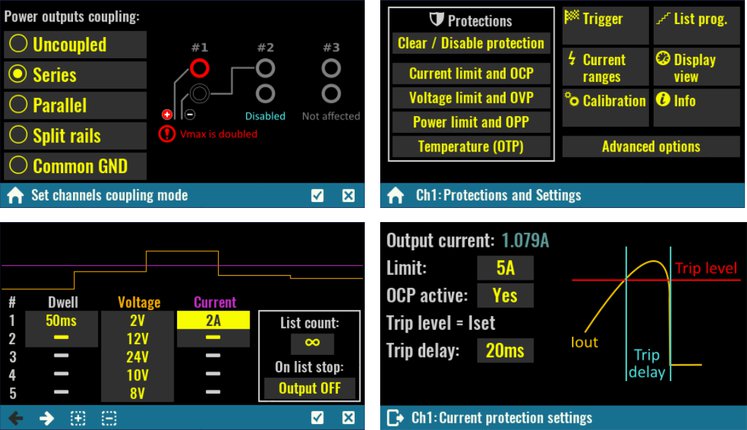 The firmware simulator is another unique feature of EEZ BB3. It is a web application that allows you to explore almost all of the device’s firmware features even if you don’t have access to one. You can configure the number and type of modules installed in your virtual enclosure and even attach virtual load to the outputs of your various channels. It also provides an SCPI text console that you can use to evaluate the current set of implemented SCPI commands. 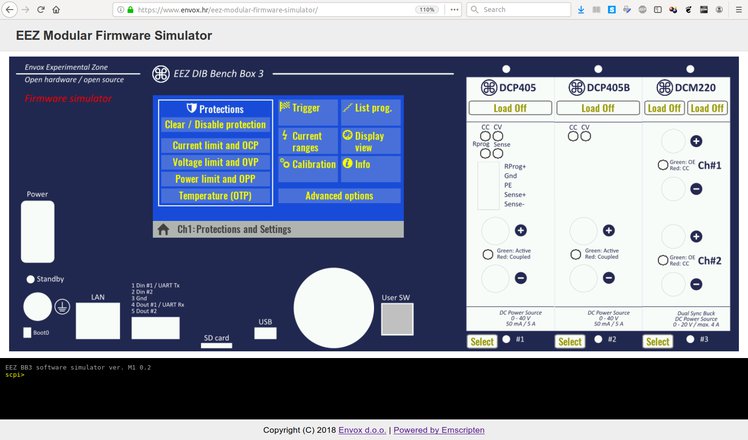 EEZ BB3 comes with multiple protection systems that have been thoroughly tested with various loads and that account for situations like power-up, shutdown, and failure of the cooling fan, among other edge-cases. These mechanisms are implemented both in hardware and in software to provide the maximum possible protection for connected loads and for the power supply itself. BB3 currently provides the following protections:

The DCP405 module comes with the following additional protections:

A BB3 enclosure kit with a wire harness, nuts and bolts for the three core modules, a 4.3" TFT touchscreen display, an encoder knob, and an 80 mm fan. Includes a set of bare PCBs for building the three core modules (AUX-PS, MCU STM32F7, and BP3C DIB 3-slot backplane) as well as PCBs for building one DCM220 two-channel peripheral power module and two DCP405 single-channel peripheral power modules. Suitable for builders with the necessary skill, time, and patience.

A BB3 enclosure kit without bare PCBs but with fully-assembled core modules (AUX-PS, MCU STM32F7, and BP3C DIB 3-slot backplane). The Starter provides an environment for experimenters who are willing to build their own modules or who want a specific BB3 configuration (such as a six-channel BB3).

A BB3 starter kit and two full-featured DCP405 single-channel (40 V, 5 A) peripheral power modules, including an AC/DC module for each. A two-channel programmable power source with advanced features: remote sensing, remote programming, a down-programmer, and additional OVP (with crowbar).

EEZ BB3 will ship as an almost-ready-to-run kit. Assembly is a simple process that requires only basic understanding of electronic circuits, a screwdriver, and an hour in which to familiarize yourself with the kit contents and instructions. The assembly process is designed to take "first hand experience" to the next level, but you can count on our assistance if anything goes wrong.

All EEZ projects are fully open-source and supported by detailed design documents that you can use to carry out maintenance, make improvements, develop hardware and software features, or even manufacture your own products. Project documentation will be improved continuously and published on our webpage and in our GitHub repositories for hardware and software.

Backers are entitled to free, unlimited, "best effort" technical support simply by emailing us. We are also willing to negotiate an arrangement for more dedicated and responsive support.

Envox d.o.o. is home of the Envox Experimental Zone (EEZ), an open source initiative to bridge the gap between DIY / hobbyist / educational / low-budget and professional / commercial test and measurement solutions.